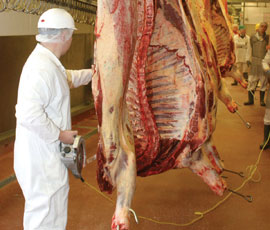 European beef prices have improved steadily in recent weeks, rising by an average of 4.5 cents/kg (3.9p/kg) in the month to 10 April.

Prices in most EU countries increased during the month, with Greek and Italian beef producers remaining the best paid in the EU.

“In both member states R3 heifer prices exceeded 400c/kg deadweight (£3.54/kg) in the first week of April,” says a report by the Livestock and Meat Commission of Northern Ireland.

Northern Ireland values also improved, rising by 2.7% in sterling terms. However, currency fluctuations meant this equated to a 1c/kg fall in euro values. “This obviously renders NI beef more competitive from the perspective of eurozone buyers and NI has fallen from 7th to 10th in the league table.”