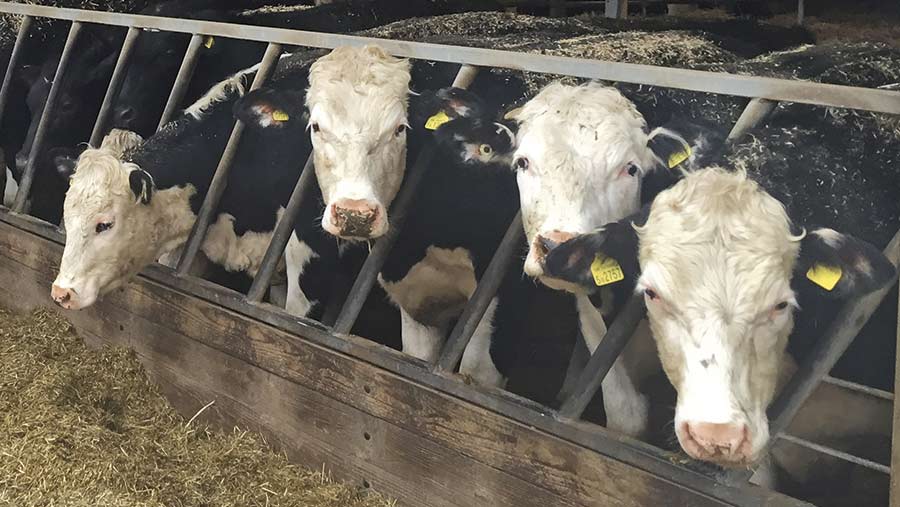 Integration of beef production has long been something vet Rob Drysdale has wished to see in practice after working more than 20 years as a farm vet.

He believes integrated systems similar to that seen in pig and poultry systems can be replicated using dairy-bred beef.

After completing a Nuffield Scholarship looking at the issue, he set about putting his theory into practice.

More than half of UK prime beef (53% in 2014) produced today originates from the dairy herd, but there is often lack of consistency in the way it is produced.

Various schemes such as Blade and Buitelaar have helped improve consistency, but Mr Drysdale wanted to see complete integration from conception and genetics through to slaughter and beyond.

Owning no land or farm, Mr Drysdale started by working with a group of local dairy farmers to source a trial batch of 120 Hereford-cross calves in 2014.

The business has grown steadily, now taking batches of 80 calves a month, and has pregnancies contracted that will see this double by the end of 2017.

All animals are contract produced using an integrated supply chain of dedicated rearers, growers and finisher. Most cattle are slaughtered through Dunbia for the Co-op.

Calves come from a network of about 40 farms in the south-east of England, Wales and Three Counties, with more than half sourced from 12 of these units.

Until recently, most calves were by sire by named, high-estimated-breeding-value (EBV) Hereford AI bulls. From January, one dairy is contracted to produce more than 60 Angus-cross per month all bred by one bull.

Several Hereford sweeper bulls have been supplied free of charge to some farms, purchased based on EBVs and known health status, to help both the dairy and the project develop.

“I work with a great team for calf sourcing; the guys take all the calves from the farms and manage them on to rearing units,” says Mr Drysdale.

“With overall involvement in calf breeding, procurement and early management any calf entering the integrated beef project should be the best it could be,” he adds.

Using a set protocol for colostrum and early management, calves leave the dairy farm only when deemed healthy and at a weight reflecting their age.

“I am happy to pay an extra £10 for a healthy calf sired by the right bull. Early calf health, and good genetics plus management are vital for efficient beef production. Any additional money spent here should be reflected in performance far outweighing any savings the ‘cheaper’ calf may bring,” explains Mr Drysdale.

Calves move to one of two dedicated units, to rear in sheds devoted just to milk feeding. Each shed is filled over a maximum of 14 days to form a group of 40 calves.

An all-in-all-out system then ensures the group moves to the weaned shed when eating over 1kg a head of concentrate daily.

Strict protocols, from feeding to vaccination, are included within a lifetime health plan. Fever tags aid early diagnosis and reduce the impact of respiratory disease, targeting antibiotics and responsible use of medicines.

He says: “The target is 1kg daily liveweight gain from arrival as a calf. Feeding more milk powder than most, using 900g/day at peak, helps push the calves on and I feel managing genetics, health and nutrition then produces savings elsewhere. I want to shave 30 days off the processing age by integration.”

Being a vet means health status is of the utmost importance to Mr Drysdale. “I want local health zones to be maintained.

Cattle reared in a TB zone, will stay in the same TB zone. I would never move from a TB one to a TB four zone.”

Mr Drysdale even has plans to market his beef on the back on their health. “I would like to be able to market beef produced having never received antibiotics. From our records this would already be possible for more than half our supply.”

Calves move to the growing unit at 80-100 days old and more than 120kg. Two groups of 40 calves merge at this point forming a batch of 80 head that stay together through to finishing.

Still housed, the batch moves gradually to a home-made blend plus silage aiming for 200kg by 150-170 days old.

Grazing starts at 200kg on rotational paddocks or set stocking, depending on what is available. Average growth is between 0.8-1kg/day over the next six months. 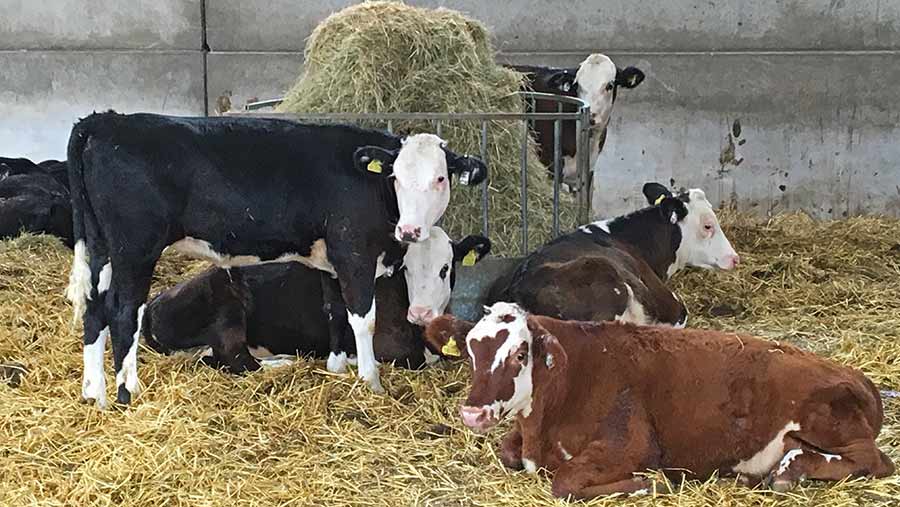 “Integration means we produce cattle able to eat forage, backgrounding the rumen to have high dry matter intakes and grow from forage. If they can eat, and process, large volumes of [total mixed ration] then they should finish really quickly,” says Mr Drysdale.

The growing farmer is paid per kilogram of liveweight gain, while on farm, to cover all the inputs bar vet and medicines.

Moving to a dedicated finishing unit at 500kg, the cattle spend between 50-90 days on feed. The finisher is contracted on a per day space price, which includes food, but no vet and meds. Cattle at this point are averaging 1.9-2.1kg/day, before processing.

Cattle are processed at 600-650kg with carcass weights mostly within 30kg of one another. The grading has seen nothing worse than an O+3 and 40% R4L averaging 17 months old.

“My Nuffield [studies] showed the best beef farmers work closely with their processor. I have negotiated a very tight specification with a ‘sweet spot’ that may be better than other premium specs, however I am heavily penalised for anything at 4H, over 340kg or under 280kg.

“Adding this grid to the premium Hereford scheme means I am rewarded for the consistency and quality integrating throughout the supply chain brings.”