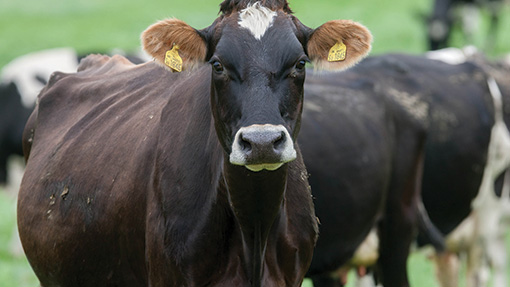 Dairy farmers could boost profits by about £20,000 a year by improving their six-week in-calf rate and empty rates.

According to consultants from New Zealand, getting more cows in-calf within six weeks of service boosts milk yields, improves the quality of heifer replacements, and reduces the number of empty cows in the herd. The Six-Week Challenge has been such a success in New Zealand that it is now being rolled out across the UK.

Since 2010, New Zealand’s six-week in-calf rate has increased by 3%, saving the industry at least NZ$110m (£212.7m), says consultant Sarah Payne, who is working with the Livestock Improvement Company (LIC) in the UK. Some 67% of New Zealand’s dairy cows now fall within the six-week period of mating, a step closer to the industry target of 78%.

In the UK, just 60% of cows on average are pregnant within six weeks of the start of service in block calving herds, but achieving the 78% target is realistic, she adds. “For every one percentage point below the target, farmers are losing £2 a cow, plus £5 for every extra barren cow. So with a 300-cow herd, reaching the target could boost profits by £20,000.”

Increasing the number of pregnant cows within six weeks of service reduces the cost of fertility intervention, which means cows are in milk for longer, and makes herd management easier, says Miss Payne. “Because a cow spends 282 days a year pregnant, the interval between the planned start of calving and the subsequent mating start date is just 83 days. When block calving, every day a cow slips is a day less in milk, and gives her less time to recover from calving, start cycling again and conceive.”

Cows that calve in the first six weeks of the calving period have better fertility rates than those in the second six weeks, she adds. And because most farmers only use AI for the first two cycles, increasing the six-week conception rate will boost the number of top-quality heifers in the herd.

To improve early fertility, farmers must concentrate on eight key focus areas, says Miss Payne. These are heifer management; body condition and nutrition; cow health; bull management; calving pattern; heat detection; dealing with non-cyclers; and genetics and AI practices. “It’s like baking a cake – if you don’t get all those ingredients right, then it just won’t work.”

For a start, heifers should reach 90% of their adult weight at 22 months old, before calving at 24 months, with a body condition score of 3. Overall cow health and bull management also have a direct impact on fertility and production.

A tight calving pattern, with 78% of cows calving in the first six weeks, improves their following fertility considerably, says Miss Payne. Good heat detection and management of non-cyclers is therefore essential. “Selecting the best genetics has a clear beneficial impact on the herd – but only if the semen is carefully handled,” she adds. “Conception rates are reduced substantially when semen is not stored and inseminated correctly, so reviewing practices and retraining can be worthwhile.”

As part of the Six-Week Challenge, farmers will either have four one-to-one visits with an LIC consultant in a year, or join with four other farms to form a focus group, including one visit to their farm each. “It’s all about taking a holistic approach, but focusing solely on fertility,” says Miss Payne. “It really can have a massive impact on your bottom line.”