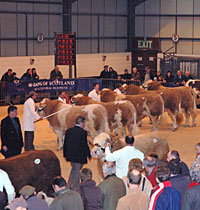 Buying a new stock bull can be a daunting experience, but sorting the good calving figures from the bad ones should be the first place to start, says an Aberdeenshire suckler producer.

“If it’s got a calving value of -12 I don’t want to know.” It may sound like a harsh statement, but in reality too many bulls are bought on looks alone and not on their figures, reckons Willie Ritch.

When it comes to buying a new Aberdeen Angus stock bull for his 120-cow spring calving suckler herd, run in partnership with his father George, Mr Ritch plays incredibly close attention to its figures.

Having only been in the cattle breeding business for 10 years, he has quickly established a herd with the genetics that work for his system. “I first started admiring the Aberdeen Angus in the 1990s and since then the breed has improved in leaps and bounds, so I bought my first bull in 1998 to run with black Limousin cross cows.”

With the aim of finishing cattle at 20 months old, calves are weaned in October and fed ad-lib silage and 1kg a head of barley. From January onwards stock are fed a high protein blend and 2kg a head of barley until turnout, which, weather depending, is normally in April. “Providing we have a dry summer, I don’t start supplementary feeding until August, when they receive 1kg a day of barley and 0.5kg of protein blend during the final finishing period.”

Heifers are sold to a local butcher who prefers a carcass weighing between 270kg and 300kg. Steers meeting a target carcass weight of 340kg are sent to a buyer in Coventry for a deadweight contract. “The Aberdeen Angus x Limousin produces a well-fleshed, textured carcass suited to both outlets,” he says. 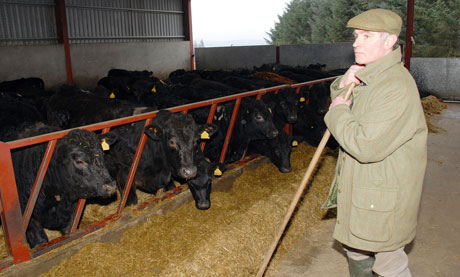 In terms of stock bulls, Mr Ritch prefers to source Aberdeen Angus bulls at the Perth sales from producers in the north-east area of Scotland. “I know the breeders, their health status and past bulls from this area have tended to do well for me in the past.” Previous prefixes to have joined the herd are Blelack, Kitewood and Auchincrieve.

But it’s not just about selecting the best available at the sales. Mr Ritch takes full advantage of the farm walks organised by the North East Aberdeen Angus Club and creates an initial shopping list based on their visual appearance.

“Often they are not what the breeder believes are their best bulls, but they are the type of bulls that work for me – long, clean with good tops and a well-fleshed back end capable of producing a good carcass.” Seeing them in their natural environment before they are presented in sale condition is also a bonus, he adds.

Once selected, he then turns to the breeding figures. “I check the breeding figures on line and make sure they have the four vital components I’m looking for: Easy-calving figures, good milk figures, a good scrotal circumference and good growth rates. You rarely get all those together, so it’s all about getting a good balance.

“When looking at the performance graphs, you need to be concentrating on the right-hand side of the graph. Any figures heavily weighted to the left of the graph will bring problems in the long run,” he adds. “It’s all about finding the balance excessively high growth rates could mean calving problems.”

Providing the figures and first visual impressions match, Mr Ritch is prepared to spend a considerable amount of money on good commercial bulls. “I’ve gone to 6000gns before for a good bull and if I choose a bull which isn’t necessarily a breeders choice of bull I can pick those up at about the 2000-3000gns mark.”

Running four bulls at a time and having one in reserve, means Mr Ritch will be looking for a new replacement at next month’s Perth Bull Sales. “I’ve picked out a few easy-calving two-year-old bulls I like the look of which will, hopefully, be capable of running with heifers.”