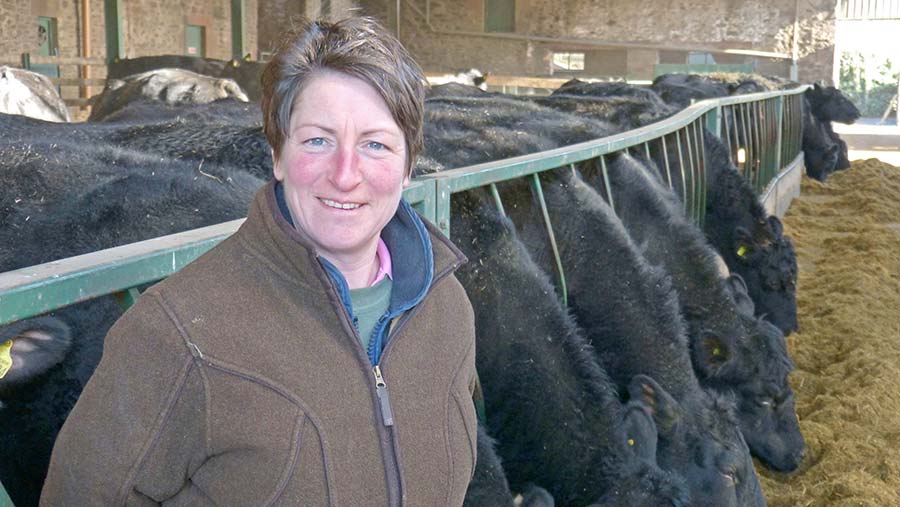 Compact calving periods, performance recording, forage-based feeding and a strict culling policy for locomotion and temperament are making a Scottish Angus herd increasingly sought after at home and abroad.

The Wedderlie team, based near Gordon, Berwickshire, has avoided following breed fashions and extremes.

Instead, the needs of the commercial farmer have remained central to its breeding philosophy.

“You cannot forget the commercial farmer,” says John Tilson, who farms in partnership with wife Marion and daughter Wanda Hobbs. “That has to drive what you do and pedigree sales, while nice, are a bonus.”

This approach is continually improving quality of progeny born from their herd of 200 pedigree Aberdeen Angus cows.

Ten years ago about 50% of the herd’s bull calves were castrated, while now about 8-10% are castrated.

Wedderlie team, based near Gordon, Berwickshire

The herd calves over a spring and autumn block, with 100-head in each. Bulling is all natural, taking just three cycles, resulting in a tight calving period of nine to 10weeks.

“A cow has to be producing a calf every year,” explains Wanda, who only selects breeding heifers from cows in-calf at the first pregnancy diagnosis at three weeks.

“No animal is rolled over from one block to the other. If they are PD’d empty there are no second chances.”

Calving ease is monitored through performance recording, with calving records and birthweights collected from both calving blocks, which calve inside.

Heifers average birthweights of 37-42kg and bulls about 40-45kg, with the belief being that calves can do their growing after calving.

And as well as striving to breed easy calving bulls, Wanda says nutrition has had a major part to play in helping with cow condition and calving, with minerals added to prevent post-calving metabolic issues.

“We offer plenty of straw and are able to increase as required through the forage wagon,” explains Wanda. “We have also tried feeding hay recently to adjust control body condition six weeks pre-calving.”

Mature cows are incredibly uniform and weigh 750-760kg, meaning heifers need to grow at a minimum of 1kg/day to weaning and at least 0.8kg/day post-weaning to reach a 460-500kg bulling weight by 15 months of age.

Milky dam lines are an important part of achieving this but so is creep feeding, explains John, who feeds a “sniff” of 17% crude protein rough mix before moving calves over to a calf blend.

“Breed for too much milk and you can produce high maintenance cows and steers that eat a lot,” says John.

Growth checks are minimised by creep feeding calves and maintaining pasture quality. Pastures for growing stock are reseeded every 5-10 years and limed according to annual soil analyses.

A range of multi-species swards from Watson’s Seeds are used, which include clover and a mix of early and late-heading grasses.

The Wedderlie team is a big believer in how early nutrition affects performance later in life (epigenetics). This is why colostrum boosters are given to cows six-weeks pre-calving (£8 a cow) to raise antibody levels in colostrum.

The first creep, which is coarse and contains a yeast, is intended to develop rumen papillae, meaning youngstock maximise growth from grass and forage as soon as possible.

Spring calves are introduced to creep once bulling ends and autumn calves are creep-fed before weaning at housing. Heifers and bull calves are split in mid-August, which sees heifers stop getting creep fed.

The herd uses homebred bulls in a line-breeding programme, as well as outcrosses when necessary.

No barley is fed to bulls in the belief that cereals can result in acidosis and hamper rumen development. Bulls serve a minimum of 25 heifers as yearlings and then serve 40 cows.

A bespoke bull pellet made with beet pulp and dark grains has been made up by the farm’s feed supplier Davidsons Feeds, specifically with no barley in it. Bulls are fed a chopped silage ration of 21kg of grass silage and 6kg of pellet (freshweight) and straw.

One bull is sold each year at Stirling Bulls sales in February as part of the herd’s marketing strategy. This year saw the “curve bender” Ellin Ergo make 14,000gns. 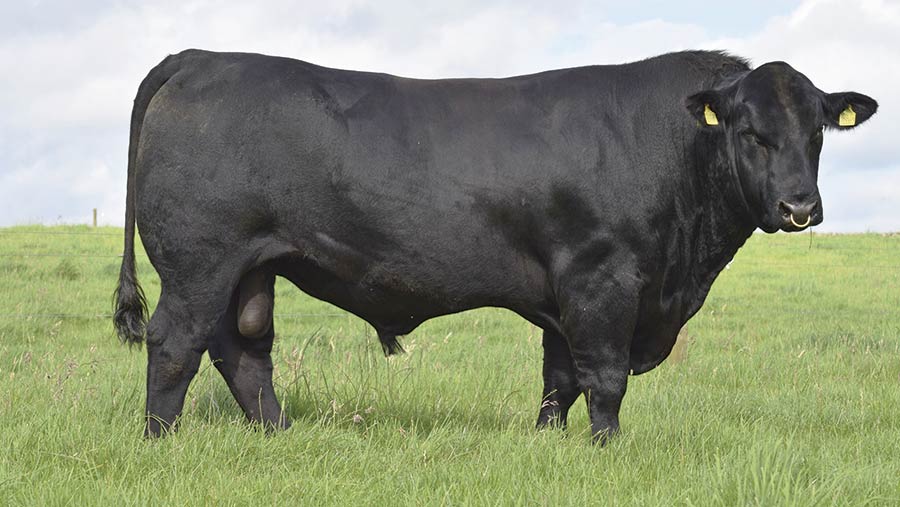 Blelack Pontius was bought for 16,000gns

Most bulls are sold privately through the year, aided by an annual catalogue which has been printed since 2013 and is marketing 79 bulls this year.

Payment is only upon delivery or collection, with many commercial buyers opting to pick a bull and then buy it up to two to three months later to fit in with farm workloads.

Catalogues are dropped off at local United Auctions and Harrison & Hetherington marts and stamped with the mart’s brand. If a buyer comes with a branded catalogue the herd pays mart commission, explains John.

EBVs: Breeding stock are selected on eye, figures and back breeding, explains Marion, who has seen the value of performance recording and scanning cattle first hand.

“Some years ago we were a little down on eye muscle area,” she explains. “Because of the Breedplan system we were able to then correct that with bulls like Nightingale El Paso.”

Genomics: Wedderlie would like to see the Aberdeen Angus Cattle Society drive uptake of genomics among breeders.

“There are some herds doing it and we have sampled some bulls but it’s something that needs numbers and lots of engagement to progress,” says Marion. “I think the society has to lead this.”

Maternal index: Too much emphasis is placed on carcase traits on the self-replacement index and a bespoke Angus maternal index is needed, says Marion.

“A specific maternal index with more focus on calving ease, calving ease of daughters and milk would benefit the breed and help in selecting replacements. Less focus on terminal traits would be required but there would need to be a weighting on 400-day weight to ensure heifers reached bulling weights at 15 months.”