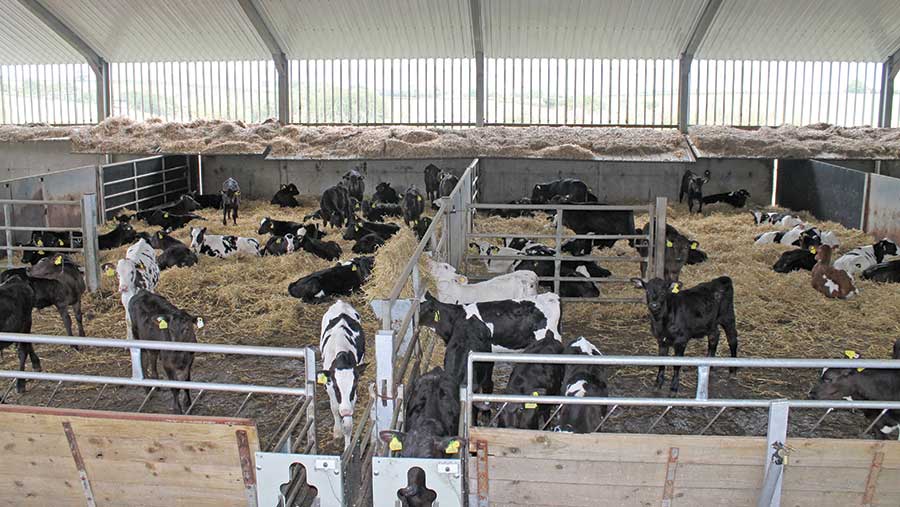 Calf housing has been constructed to suit the animals' needs.

Sarah Whiting started rearing calves for Blade at Fursdon Farm, Liskeard, Cornwall, 12 years ago and did not have the time to bucket-feed calves as well as look after four children. So she opted for automatic milk machines, and hasn’t looked back.

When they moved to the farm, they constructed purpose-built sheds for calf rearing and chose a steep pitch with an insulated roof and vented ridge, with a perforated metal wall sheet, rather than Yorkshire boarding.

Mrs Whiting rears 1,000 head a year. Calves arrive in batches of 120 at two to four weeks old; Angus calves must be at least 45kg on arrival, with other breeds more than 50kg.

Each calf is tagged with electronic identification for the milk machines, and given an intranasal vaccine against pneumonia, alongside treatments for fleas and ringworm.

As calves arrive over a maximum three-week period, they are then given another dose of a ringworm vaccine – once the shed is full – dehorned and castrated.

After six weeks they are weaned and given another pneumonia vaccine; then after 10 weeks they get a booster and are pre-movement tested for TB before moving on to finishers 12 weeks after arrival.

“We then pressure-wash and disinfect the sheds ready for the next batch,” she says.

With the rapid turnaround, attention to detail is vital to Mrs Whiting’s success. “We have two milk sheds, and have erected little internal roofs at the back of the pens that calves like to lie under,” she says.

When they arrive, she spends some time teaching them how to drink from the milk machine, which is programmed to give three meals a day. “They drink about 19kg of powdered milk in the first six weeks, as well as 16% protein ad-lib concentrate and barley straw.”

Although stockmanship is something that both comes naturally and develops with practise, the milk machines are a useful management tool, says Mrs Whiting.

“They will come up with a warning if a calf is drinking slowly, breaks away or is not drinking enough, which is usually a sign that it has a raised temperature.

Automatic machines can highlight any calves not feeding.

“Of course, there are physical signs of illness too, such as droopy ears or panting, but it all helps to treat a sick calf as quickly as possible.”

Weaning is done gradually over a two-week period, and calves are allowed to suck at the teats when not feeding, which minimises naval-sucking and stress. “About a week after they’re weaned we move them into a more open rearing shed, although they stay in the same groups of 30 to reduce stress.”

Mrs Whiting then buys 120-150 Angus calves back from Blade in July and August to finish for the company’s Aberdeen Angus scheme, earning a premium over the AHDB-quoted weekly price.

“They stay on a similar ration for three weeks, and we slowly introduce haylage and reduce the concentrate feed before they move to an off-lying shed and pasture,” she says.

Housed over winter, they are finished around their second Christmas at 18-22 months old, with steers averaging more than 300kg deadweight and heifers 280-290kg.

The Blade calf system operates on a bed-and-breakfast basis, with the Whitings providing the buildings, labour, straw, electricity and water, while Blade covers the livestock, feed, vet and medicines.

Mrs Whitings weighs every batch on arrival, at weaning and before departure. The latest batch averaged 138-140kg each – well above the minimum target of 100-110kg.

“I keep a note of mortality and daily liveweight gain,” she says.