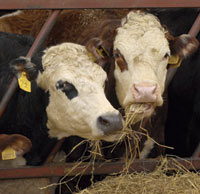 It also has the added risk of human infection manifesting itself as flu-like symptoms.

In dairy herds, leptospirosis can cause infertility and abortion alongside sudden milk drop, says Den Leonard, Lambert, Leonard and May. “Milk drop affected animals will typically go from looking ‘milky’ to dry.”

Leptospirosis is caused by a bacterium that lives in the kidneys of carriers and is spread in the urine.

“When infected urine makes contact with mucosal surfaces, such as the nostrils, a new infection will form.”

Consequently bacteria can be spread through urine, water supplies, close confinement and at pasture.

Sheep also form an added source of infection, increasing the likelihood of infection on mixed farms.

The disease can be tested for using milk and bloods, but it is difficult to categorically say it is the cause of the problem, says Mr Leonard.

“The best cause of action is vaccination. Research has shown vaccinated cows in an endemically infected herd had 19% better pregnancy rates and almost 17% less culling compared to unvaccinated animals.”

For more from our disease check series click here.