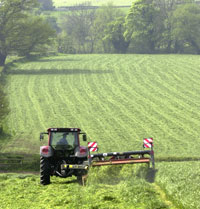 Too many farmers are concerned about prime cattle prices – something they often have little control over – and should instead be focusing on something they can influence, such as better grass management to reduce costs.

That message came from Justin McCarthy, Irish farmer and journalist, who said managing grass and cattle properly through a beef finishing system could put an extra 28p/kg deadweight into farmers’ pockets.

Grazing effectively – by shutting off grass before cattle graze it down too hard in winter and using small amounts of N in spring to aid early growth before the main applications – could shorten housing periods.

Using figures for cattle weighing 350kg liveweight, better grassland management could cut housing from 165 days to just 120 days, he said. Where cattle achieved a DLWG of 0.4kg standard figures suggested costs would fall from £120 for the longer housing period to £86.

Get grazing right next season and stock could achieve a DLWG of 1kg rather than 0.75kg, suggested Mr McCarthy. By housing, cattle would be 618kg liveweight rather than 566kg for a cost of £32 compared with £28. “The former is slightly higher, reflecting greater use of fertiliser to stimulate spring grass, but it’s a cost that pays for itself in improved performance.”