This year’s finalists all understand the costs, challenges and opportunities of the beef sector and all have different approaches to future-proofing their businesses.

Each farm is aligned and tuned in to its market and produces a desirable product that the market wants, whether that be high-welfare beef that hits grade specifications, high-index, easy-calving Charolais cattle or hardy, functional Lincoln Reds that perform commercially as well as in the show ring.

Coupled with cost control, this means each business is sustainable and is on a solid footing to grow in a post-Brexit era of lower subsidies and uncertainty.

The 2018 Beef Farmer of the Year finalists 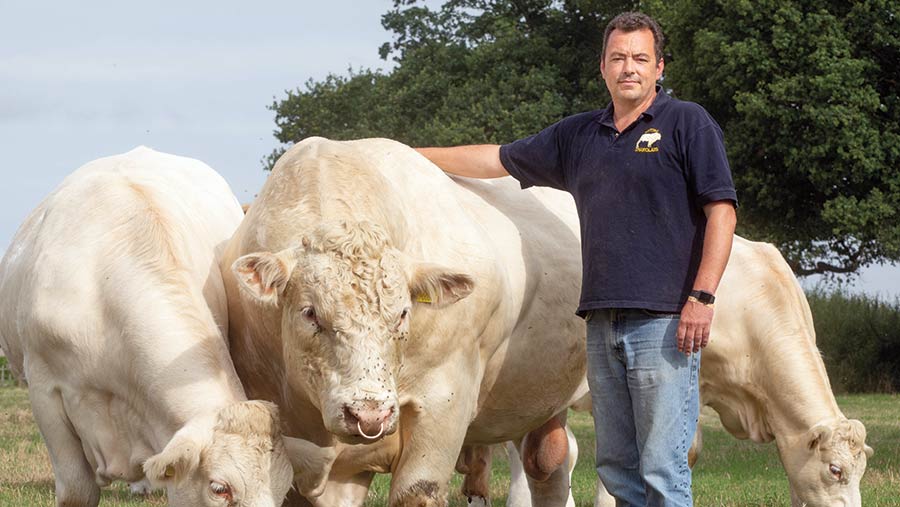 Cattle breeding and meat enthusiast Ben Harman is a third-generation Charolais breeder with an eye firmly on the future and a passion to develop a new value-added beef product using the breed of cattle he loves.

The Silver and Chesham herds of Grove Farm have produced famous bulls such as Chesham Hercules, the 30,000gns Silver Joss and Silver Prometheus, a one-time trait leader for 200- and 400-day weights.

But now Ben, whose grandfather, Tony Harman, first introduced Charolais cattle to Britain, is broadening his business to include the cross-breeding of Charolais with Wagyu beef straws to more than double progeny carcass value.

Firm belief in the value of performance recording through the Breedplan system has lifted herd figures from below breed-average in 2007 to this year’s calves being in the top 10% of the breed. This year’s bulls have terminal and self-replacing figures of 57 and 55, respectively, against averages of 41 and 37.

Through attention to short gestation periods and calving ease figures, Ben has bred a herd that can calve without fuss. Some 80% of calving is completely unassisted, with calving cameras used in sheds.

He has invested in bulls such as Thrunton Fairfax for short gestation and exceptional length. Fairfax became Ireland’s number one bull in the star-rating system.

Meanwhile, Breedplan graphs show eye muscle area can be improved in some of the cattle, which Ben hopes to achieve by investing in Balthayock Musketeer.

A cross-breeding programme with Wagyu is being used to add value and open a new market for a valuable premium product – Chagyu.

Word of mouth and social media has seen Chagyu meat already make an impression. The marbling of the Wagyu and Ben’s attention to meat quality are a recipe for success.

Ben believes 80% of meat quality is down to the last 42 days before slaughter and the 28 days after.

Therefore, no cattle are mixed or worked in this period and all Chagyu animals are introduced to the cattle trailer at least twice before heading to the butchery in pairs. The carcasses are then hung, butchered and dry-aged for 28 days.

The herd calves in a spring and autumn block to provide bulls for breeders throughout the year and for autumn sales. Heifers are outwintered for two winters before being bred to a Wagyu straw and swept up by a Charolais.

Up to half the herd is bred to artificial insemination each year. Conception rates have lifted from 30% to 95% after Westpoint Vets started overseeing a strict, fixed-time nine-day CIDR programme.

Bulls are fed for sale by supplementing grazing with 4-5kg of 16% protein. However, some bulls are targeted towards a growing market for bulls reared off grass.

A pelvic measuring programme has just started at Grove Farm, where Ben will continue to look at new ways to test and benchmark cattle.

As vice-chairman of the British Charolais Cattle Society, Ben is keen to drive uptake of pelvic measuring in the breed, along with myostatin monitoring through genotyping.

He will also look at how the leptin gene – that can affect dry matter intake – can be monitored, with possible implications on breeding and finishing cattle.

Looking ahead, the business sees TB and Brexit as two threats, which is why semen sales and value-added Chagyu are two critical ventures to keep the farm’s genetics heading across the UK and provide a premium for beef on the hook. Ben hopes to build an on-farm butchery (“Chagyuterie”).

“A trailblazing Wagyu-cross is spreading risk and opening up new avenues for the Harman family, while passion, decades of experience and techniques from around the world are improving how the cattle perform, both on farm and on the plate.”

A keen eye for data and the ability to improvise an outdoor corral finishing system has propelled a Lincolnshire beef farm to grow its output 15-fold in 20 years.

The Laughtons were barley-finishing 400-500 black-and-white steers alongside a straw delivery business when BSE hit in the 1990s and have now become full-time beef farmers, finishing 6,000 cattle a year at Southfield Farm.

The business hinges on the belief that cattle perform best when outdoors and that waste products and geographical location need to be exploited to good effect. All cattle are kept outside year-round and are fed a ration including potato and bread waste.

Constant evaluation of the cattle bought privately and at marts is driven by a bespoke data system created by Trent Scales.

Cattle are bought as traditional store bullocks and heifers from live marts from Ashford to Stirling at 12-18 months. However, more cattle are coming through integrated dairy-beef schemes at 12 weeks old, weighing about 200-210kg.

A growing dataset has found the integrated animals achieve 333.9kg carcasses in 549 days, which is 3.5kg heavier and 206 days faster than the conventional store cattle.

All cattle are categorised on breed. Angus and Hereford scheme cattle grow the fastest on average at a daily liveweight gain 1.25-1.3kg.

This is driving the business towards a more integrated calf-rearing scheme because of the greater efficiencies the system has shown in feeding young cattle.

The business has grown around the principle that cattle are happiest when outdoors, which has resulted in mortality rates of less than 1% and very low antibiotics use.

On arrival, cattle are EID-tagged and weighed to be put on a specific diet. They are also wormed, fluke drenched, given a respiratory vaccination and a trace element bolus.

Cattle are then fed a bought-in ration of maize silage, straw, Trafford Gold, bread and potato waste and minerals. They are kept in home-made straw bale-walled corrals in groups of 200-300-head and sold deadweight at 580-600kg.

Mr Laughton stresses that the farm’s moderate rainfall of 60cm and location 10 miles from the coast mean cattle only require special intervention and management five days a year most years.

Thorough contingency plans are devised for hot and cold weather and cattle get extra inspections at these times. Small numbers of cattle can be housed if necessary.

Additional temporary bale walls are built and extra feeding and bedding is provided in cold weather. In hot weather, misters and shade are used to cool cattle and extra feed is provided during the cooler periods of the day.

Staff are trained in handling and loading cattle through a handling system designed to have no bruise points using Temple Grandin’s principles. Black sand from blast furnaces covers loading pen floors – it is non-slip and very quiet.

With so much of the business hanging on the genetics bought in from other farmers, Mr Laughton sees further improvements from using data and communicating with suckler farmers to produce cattle that leave a better margin for both suckler farmer and finisher.

Integrated dairy-beef finishing is an area of possible expansion for Laughtons of Louth due to the efficiencies and superior weight gain of the animals.

Current muck-for-straw arrangements will continue to provide a vital service to the sustainability of local arable farmers, while the modular and replicable finishing system could be repeated on other farms in the area, allowing Mr Laughton’s system to finish more cattle.

“Andrew’s belief in the value of fresh air to cattle and his ability to improvise has allowed him to pioneer an efficient and high-welfare system that is making the best use of waste to produce cattle the market desires.” 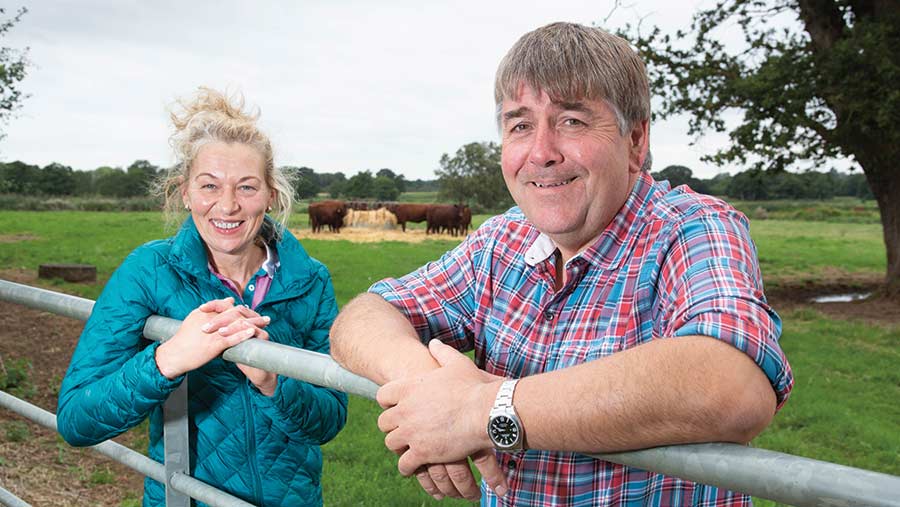 In just 12 years the Manns have used strict culling policies, rigorous performance recording and a 10-week calving block to transform carcass weights and fertility in their Lincoln Red herd.

Starting with five purebred heifers in 2006, Natasha and Richard Mann have bred cattle that perform outside all year round and have turned their hobby herd into a viable commercial enterprise.

With the vet an hour-and-a-half away, they had little choice in breeding cattle that perform with minimal fuss, alongside running a vegetable-growing operation on Suffolk marshland, ranging from light, blow-away sand to riverside clays.

Since 2009, Natasha decided to opt for a strict culling policy around a 10-week bulling period, which has seen carcass weights lift 35kg in the past four years.

Currently the herd, which is spring-calving and calves heifers in autumn, is managing a 95% in-calf rate in 10 weeks and a 93% calves-reared figure per cows bulled.

This has been despite stopping creep feeding in 2015 and has been helped by identifying a copper deficiency caused by molybdenum. This problem was addressed with a high-copper mineral block and copper boluses twice a year.

All cattle have been weighed since 2008 and benchmarked in the Manns’ own database, recording growth, calving ease and bulling and health records.

Rigorous record-keeping shows the herd is performing in the top 25% of AHDB farms, with a current total cost a cow of £988.

Careful selection of cattle has left the herd producing commercial cattle that grow on unimproved and organic grassland at a daily liveweight gain of 1kg.

The Yarn Hill herd is being bred and marketed as natural, easy-calving, high-welfare and traditional, although the restaurants and outlets that buy the beef is hardly run of the mill.

Youngstock are sold either on a standard butcher’s trim as prime bullocks given finishing concentrates from weaning, or as organic cattle at £4.40/kg, finished just off grass.

Two butchers – Direct Meats and Salter and King – sell the meat, with Direct Meats supplying restaurants across Europe, Asia and the UK and craft butcher Salter and King taking cull cows and hanging them for 60 days to mimic the Rubia Gallega-style beef of Galicia in north-western Spain.

Heifers are calved at two-and-a-half to three years old and calve for a second time 18 months later. Heifers grow at 0.75kg/day and more on unimproved permanent pasture and grow to a mature size of 720-800kg.

While cattle are outside 12 months of the year, the herd is housed at night from six weeks before calving until two days after calving. Calving is easy and hassle-free, with heifer calves weighing 32-35kg and bulls 35-39kg.

Home-grown forage supports the herd all year, while they are outwintered on strip-grazed turnips with straw and hay or silage.

Home-grown oats and barley are fed to commercial cattle, which is processed in an on-farm mill-and-mix unit. Only distillers’ pellets, molasses, minerals and preservative are bought in.

Tremendous show ring success and new ventures into value-added beef will be part of the Manns’ marketing package for the Yarn Hill herd and the Lincoln Red breed in the future.

The main ambition is to grow the demand for Yarn Hill heifers and bulls by proving the breed as a commercial and pedigree success story. The hope is to eventually earn a supermarket premium to drive the uptake of this ancient breed on beef and dairy farms.

“Through the meticulous study of bloodlines, bulls and on-farm performance records, the Mann family has elevated their herd to perform on a commercial basis, while marketing beef across the world to add value.”

“I would like to recognise the achievements of the finalists who have demonstrated a passion for innovation, an attention to detail and an unwavering commitment to delivering a quality and sustainable product.” ”