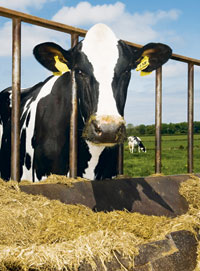 Concern is building among farmers as the UK battles one of the driest spells in 100 years. Met Office figures show from January to June the UK had an average rainfall of 356.8mm compared to a long-term average of 511.7mm.

Livestock farmers from across the country have been reporting significant forage shortages as a result of a lack of rain, with reduction in silage yields of up to 40% compared to last year and hay crop down by up to 50%.

A lack of forage now and for the winter has been enough to force some producers to reduce stock numbers significantly, according to reports on FWi’s Animal Banter. “Its going to be an expensive winter, so I may think about cutting back numbers a bit,” said Connached.

Rossymons also reported a Kentish farmer was forced to sell two-thirds of his herd to a farm in Wales because of a lack of feed this winter. “He hasn’t a hope in hell of feeding his cows this winter so he’s taken the money”.

In Cheshire rumours have also been circulating that several dairy farms only had several weeks left of silage stock, according an anonymous source.

And given the extreme conditions EBLEX beef and sheep scientist Liz Genever urged farmers to get forage analysed. “It’s important farmers use this information to formulate a feed plan, considering options such as planting a catch-crop if necessary and if soil moisture allows.”

Straw prices have also been reported to be making up to £100/acre which is also hampering farmer’s efforts when trying to find alternative feeds.

• Join the discussion online at in our forum