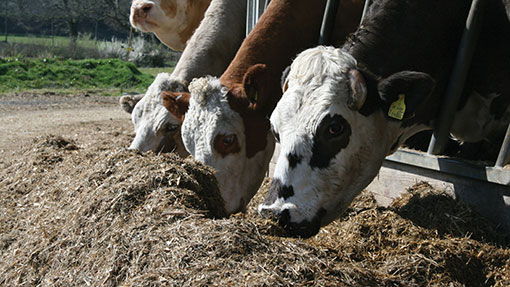 On one Sussex farm molasses is making a return to beef rations after a 60-year absence in a bid to improve palatability.

A total overhaul of the nutitional management of a 125-cow suckler herd in West Sussex is already bringing significant improvements in performance as well as cutting bought-in protein costs.

Alison Eggert-Hobbs runs the family’s 1,000-acre Fulling Mill Farm, Lindfield, Haywards Heath, where there’s been a major re-think on the herd’s feeding regime to provide both a lower-cost source of protein in the mix and boost feed intakes.

Home-grown wheat, barley and oats meet the entire cereal needs to add to the forage-based diet of the family’s cattle business.

The farm produces strong stores to sell at about 24 months from its virtually pure Simmental suckler herd and has 250 acres of grass and grows 80 acres of maize for silage.

Beef nutritionist David Hendy was brought in last year to change the herd’s rationing. “One diet was being fed to all the cattle, so the aim was to focus on developing individual mixes for each stage of growth.

“Crude protein was lacking in the diet and some of the silage was rather dry, so those shortfalls had to be addressed – and that also meant improving the palatability to increase intakes,” says Mr Hendy.

The diet changes undertaken so far have concentrated on the growing and finishing cattle, as well as the newly calved cows as they move into the farm’s new roundhouse.

“The diet needed the addition of a slow-release bonded urea as a purely rumen-degradable source of protein in order to feed the rumen micro-organisms to maximise microbial protein.

“It’s not unusual for beef diets to include urea to address this shortfall in crude protein.

I’ve used it for many years in finishing rations and sometimes in conjunction with vegetable proteins such as rapeseed meal, HiPro soya and/or distillers grains to provide a balance of degradable and undegradable protein in the diet,” says Mr Hendy.

He opted for a high-sugar, high-nitrogen (in the form of urea) molasses product.

“It provided us with a degradable protein that’s very efficient in tackling the low crude protein levels in forages.

“The aim is to create a high level of efficiency in the rumen by using regulated release of urea as the source of protein – and it works really well.

“We’ve seen a big improvement in feed intakes across all ages of cattle because of the increase in the palatability of the mix, particularly where high dry matter silages are being fed and forages may be low-energy or low in protein.”

Ms Eggert-Hobbs says the management changes are a “work in progress”, but acknowledges the early results are good with increased intakes.

“The challenge has been to cope with the nutritional shortfalls of the forages and balancing protein and energy levels, while still needing to get the cattle to eat more.

“Now that we’re tackling these rationing issues we’re seeing the results very clearly in the way the cattle are performing.”

Up to 1.2kg/head/day of the molasses/protein mix is being fed depending on the forages used, although this rate has reached 1.3kg/head/day in the rearing mix.

“In the finisher diet we were looking for a much lower level of crude protein, so we were using more maize silage and adding 1.2kg of the high-protein molasses.

We were aiming for just over 14% crude protein in the grower ration and 13% in the finisher ration.

“We’ve used two options for the grower and finisher rations depending on the number of cattle in each group and the ease of mixing.

“Alternatively, using the grower ration as a base for the finishing cattle and adding further cereals at up to 6kg/head/day, depending on how quickly the cattle are to be finished,” says Mr Hendy.

“We hadn’t fed any molasses-based products on this farm for more than 60 years, but we’ve been very impressed with the benefits it has brought to the diet,” she says.