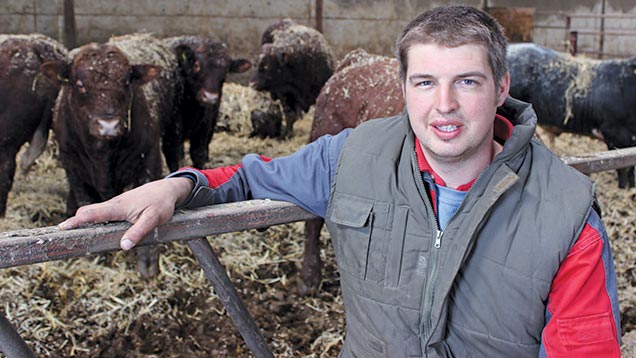 Switching to crimped cereals instead of feeding cattle dry-rolled feed has marked a turning point for Colin and Gareth Pugh’s beef enterprise at Cwmwhitton Farm.

The father-and-son team, who farm 405ha in Whitton, Powys, say their farm is mixed in the traditional sense, so every enterprise has to dovetail with another.

So, when they learned crimping grain meant harvesting about three weeks earlier than usual, they could see a big advantage from the outset.

“We could see we would be harvesting in better weather and it would take the pressure off both the main cereal harvest and the seed potatoes, which come early in September,” says Gareth Pugh.

“And getting the barley off early would also mean we could sow an autumn forage crop such as stubble turnips for grazing lambs or even reseed grassland prior to winter.”

What is grain crimping?

The reality lived up to their expectations in every way, but exceeded them greatly in terms of animal performance.

“From the moment we started feeding crimp in 2008 it was obviously very palatable and there has definitely been less trouble with feet and absolutely no sign of acidosis,” says Mr Pugh.

What he could not determine was precisely how fast the cattle were growing when fed on crimp, but he was in a good position to find out.

“We are a Farming Connect Farm, which means we can be used for demonstration purposes by the Welsh government, and it also gives us the opportunity to do some trials,” explains Mr Pugh.

“I was keen to carry out a trial using crimped cereals, as I wanted to convince myself we were doing the right thing,” he says. “As a demonstration farm we were able to do so under the supervision of independent nutritionist David Hendy, who designed a trial for the farm.”

Continental-cross bull beef from the herd’s 140 Salers suckler cows were randomly split into two groups and put on one of two nutritionally equal rations. One group was fed dry-rolled barley with oats, beans, minerals and yeast, while for the other group the rolled barley was substituted with a 50:50 mix of crimped wheat and barley.

Both groups were fed their rations ad lib, along with plenty of water and straw.

See also: Save silage and make the most of cheap cereals

The outcome of the trial was conclusive, with bulls fed the ration with crimp performing better than those fed rolled cereals.

Those on the crimp had a 2.97% increase in daily liveweight gain and a £39.44 a head increase in margin over feed. They also had a 2.5% increase in carcass weight from 1.5% fewer days in age, and carcass grades were higher, with more grading U+ and one E on the crimp diet.

“The figures need to be seen in the context of a one-off trial, but they concur with other research carried out over a number of years that suggests crimped cereals do perform better than dry-rolled,” says Mr Hendy.

“We also know that crimp is excellent from a nutritional perspective, as it is safer for the rumen and more digestible than rolled grain.”

For the Pughs, the farm is definitely sticking with crimp, with more and more advantages seen over the years. Apart from the earlier harvest, which is a huge bonus for this farm, Mr Pugh says both the quantity and quality of the crop is better.

“This equates to a dry matter of 2.44t/acre for crimp compared with 2.31t for dry cereals, and the crimp’s protein is higher and its digestibility better, because much less lignin has formed.”

Other advantages he cite include crimping, treating and clamping on the day of harvest and slashing the need for rolling and bagging grain – with the dust and labour involved – through the winter.

“Crimping has certainly made growing cereals on an upland farm with a short growing season much more manageable,” he says.

“It has made winter feeding – for both beef and sheep – much easier than before and, most important of all, we are getting better animal performance.”