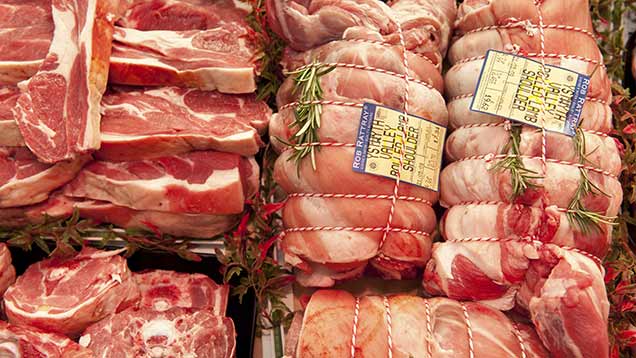 The president of the Farmers’ Union of Wales has called for a fairer system for distributing red meat levies to reflect the number of animals born and raised within Wales.

In his final speech as a Hybu Cig Cymru (HCC) board member, Glyn Roberts said there could be no doubt that the inequity in the current red meat levy distribution system had held the organisation back to the detriment of Welsh farmers.

Mr Roberts was referring to the system whereby levies collected from farmers and processors in countries in which animals are slaughtered are made to those countries’ meat promotion bodies – HCC in Wales; Quality Meat Scotland in Scotland and AHDB Beef and Lamb or AHDB Pork in England.

“The current levy distribution system is not fit for purpose and Welsh farmers are suffering as a result.”
Glyn Roberts

“This means that HCC’s levy funding does not come close to reflecting the number of animals born and raised in Wales, a problem which has got much worse since the closure of the Gaerwen slaughterhouse in North Wales, which has led to many more Welsh animals being slaughtered in England,” said Mr Roberts.

The closure of a pork processing facility in Scotland in 2012 had a similarly detrimental effect on Quality Meat Scotland’s income.

Mr Roberts said the issue of passing levies back to the countries where the animals were reared had been raised repeatedly over the past decade, but had not been tackled.

“The current levy distribution system is not fit for purpose and Welsh farmers are suffering as a result,” he said.

“The advent of EID and other technology means an equitable system should now be easier than ever to implement.”

Mr Roberts, who has been a member of the statutory Welsh meat promotion body’s board for more than a decade under different board structures, said he was standing down in order to give his new role as FUW president his complete attention.