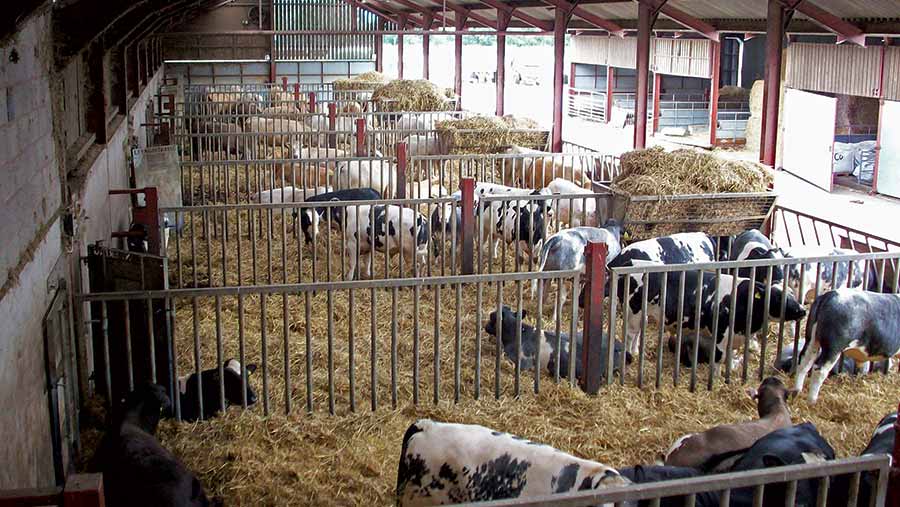 Bull finishers could be underestimating the protein requirements and growth potential of modern beef cattle, a leading specialist has warned.

Harper Adams University beef specialist Simon Marsh, who carried out the study, believes the results add to concerns that nutrition textbooks are outdated.

This contradicts Agricultural and Food Research Council (AFRC) 1993 publication guidelines, which state that intensively fed bulls weighing 250kg and above need a ration with just 12% CP.

And while the higher protein ration cost £13/t more, the margin over feed cost increased by £32 a bull and carcass value improved by £43 a bull.

This is proof that farmers should “re-evaluate rations”, according to Mr Marsh. He says the study, which compared dairy-cross continental bulls, is even more relevant to pure continental beef genetics, whose nutritional requirements far exceed AFRC 1993 publication guidelines – which use data from work undertaken in the 1970s and 1980s to advise the nutritional requirements of beef cattle.

“The massive performance improvement in intensively finished cereal-fed black and white bulls has seen slaughter weights lift in this time from 220kg carcasses at 12 months old to 290kg at 13 months,” says Mr Marsh.

“More dramatic still are the gains in intensively finished suckler bulls that were once slaughtered at 280-300kg at 12 months old in the 1980s and can now reach 400kg carcass weights at 13.5 months old.”

The future of beef finishing

Looking at the future of beef finishing, Mr Marsh sees a 12-month suckler bull slaughter date working well “from a system point of view”, especially with the market moving to lighter carcasses. “It fits nicely. You slaughter the animal and then the next one is born.”

However, he warns that breeds must be selected to have adequate fat cover, advising farmers to choose bulls with positive fat depth EBVs.

Protein in the future

The type of protein animals receive is of great importance, according to John Parker of Select Nutrition, who reminds farmers to meet the microbial protein requirements of cattle.

His message, as farms explore different proteins to meet falling abattoir maximum carcass weights and comply with European legislation, is that animal health must not be ignored.

“With ‘greening’ and changes to the Single Farm Payment, legumes such as peas and beans have a role to play in some systems,” says Mr Parker, who has seen increasing use of maize and grass silage in bull beef systems.

“The forage needs to be evaluated for protein and minerals and balanced accordingly. The Rosemaund system demonstrated that supplementing fast-growing animals with a mix of soya and urea (and minerals) enabled more efficient use of starch, leading to improved animal performance.

“Formulating a diet combining soya and urea enables the overall diet to have an increased ME and starch level because cereal levels can be increased up to 95% of the mix with restricted concentrate fed rations, increasing potential DLWG and decreasing days to slaughter.”