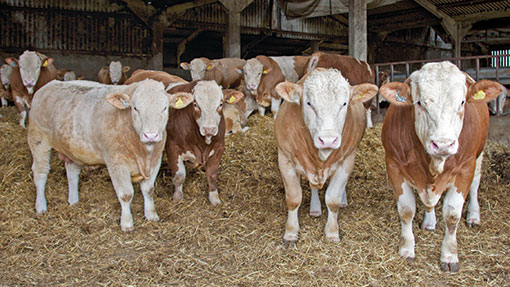 Bull beef accounts for only about 15% of the UK’s annual cattle kill, but their faster finishing time compared with steers may make them a more attractive option in the future, despite having a lower value in terms of p/kg.

While prime cattle prices remain historically high, margins for finishers are still tight, tempting some farmers to consider moving to bull beef. However, the decision to switch from finishing bulls rather than steers shouldn’t be taken lightly, say beef management experts.

While the appeal of a faster turnover of income is making more finishers consider bull beef, advisers say it’s important to make careful adjustments to the way cattle are managed and marketed to optimise any benefits from finishing bulls compared to steers.

Phil Handley of EBLEX says accommodation and handling facilities need to be carefully assessed if a changeover to bulls is being considered.

“As well as ensuring bulls can be handled safely, it’s important to be mindful of how they are penned and grouped to ensure any potential flightiness is minimised. Keeping bulls in a calm, quiet environment with the minimum of stress and disturbance will reduce the risk of adversely affecting meat quality.”

Although bulls perform no better than steers in the store period, they are capable of a higher feed conversion efficiency when managed for optimum weight gain in the finishing period. Most finishers slaughter bulls at up to 15 months old, although many are killed a lot younger.

Steven Crabtree has switched to finishing all his male home-bred suckled calves as bulls instead of steers – and it’s a decision he’s made since starting to buy herd sires based on EBV figures.

“We bought a Charolais bull from the Balthayock herd with high EBV figures and decided to capitalise on the growth rate by keeping our suckler-bred bull calves entire. It’s been a big success. We’re now selling bulls deadweight at 320-350kg, just over 12 months old, for about £1,200.

“At weaning, the calves by the high EBV bull were an average 70kg heavier than our other calves,” says Mr Crabtree.

The system at Bottom Park Farm sees the spring-born calves allowed to suckle their dams until nine months old. “We creep feed the calves outside, but we don’t push them on until they come inside. From 10 months old, we fire in the feed. We let the cow do the work up to Christmas. The calves have a grower ration and then switch to a bought-in 14% protein concentrate finisher diet.”

If the market stays as it is, he believes finishing bulls is hard to beat, but the key is getting them away in good time. “We are getting less a kilo compared with steers, but I think that is compensated for by what we gain in growth rate.”

Bull beef has been under the spotlight at Harper Adams University, where dairy-bred bulls – pure Holstein as well as calves by continental and Angus sires – were finished at 12 to 15 months old on both ad-lib cereals and a silage-based system.

“Bulls have a 10% performance superiority over steers. The slaughter of dairy-bred bulls should be dictated by feed conversion rate (FCR) and fat cover, with most bulls slaughtered below 600kg,” says Simon Marsh, beef specialist at Harper Adams.

“But previous research has shown that three-quarter-bred continental suckler bulls can be taken up to weights of 800kg – that’s 460kg carcass weight – without a significant deterioration in FCR, and achieve growth rates at about 1.4-1.5kg/day from weaning on an intensive cereal finishing system.”

“They have to be growing from day one and have to be killed sooner rather than later. Feed conversion efficiency gets worse as they get older and they must not be allowed to go over 16 months before they are slaughtered.”

Mr Hendy says bull beef rations must enable the cattle to make the most use of energy levels in the diet.

“Margins for bull beef finishers rely on maximising the feed conversion rates during the early stages of weight gain and getting them away by 14 months. It’s possible to get bulls up to 750kg at well under 14 months. The aim is to get as much weight on bulls as possible,” says Mr Hendy.

“Management of bulls needs to be spot on and has to be at a much higher standard compared with a system finishing steers. If it’s not, there’ll be a knock-on effect on feed conversion efficiency and liveweight gain.”