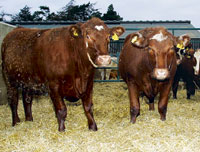 British beef prices have come under massive pressure over recent weeks as currency movements continue to go against domestic producers.

The Agriculture and Horticulture Development Board said the weakening euro against sterling had slashed the gap between Irish and British beef prices over the past six months, making Irish beef more attractive to importers.

In January, British R3 beef was worth 33p/kg more than its Irish equivalent, but by the end of May the gap had dropped to just 11p/kg, it’s latest market survey revealed. “The currency movements are likely to be contributing to the current downward pressure on prices in GB. The weaker euro offers opportunities to Irish beef exporters as euro zone produce becomes cheaper to purchase for the large UK retailers.”

With cattle slaughterings in the Irish Republic up by 15% in the first quarter of 2010, combined with weaker consumer spending, prices dropped by 4% against the same period last year.

However, GB markets were more stable this week. The football World Cup supported demand and boosted prices for R4L steers to 269.1p/kg. Although 0.2p/kg up on last week, that was almost 19p/kg below the same time last year.

Auction values have also improved due to stronger demand, with finished steers averaging 145.5p/kg liveweight – 3.3p/kg up over the past fortnight, but 8.4p/kg down year-on-year.