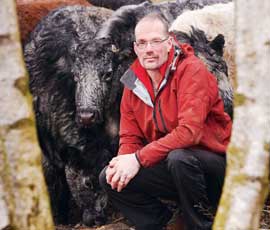 Native breed beef produced by National Trust tenants in the north west has been a massive hit with customers at regional fine foods supermarket Booths. Jeremy Hunt finds out more.

The “Beef into Booths” scheme set out to encourage the trust’s tenant farmers to keep traditional cattle breeds and add value to the beef by creating a strong visual marketing campaign. It has the added benefit of reducing producer costs and meeting environmental and welfare requirements, strengthening its consumer appeal on the way to the butchery counter.

Producers, the trust and Booths have worked with European Food and Farming Partnerships to develop the provenance, quality and pricing model for the scheme, which last year saw a throughput of 160 finished cattle. In this shortened supply chain, producers are directly in touch with their customer.

This year throughput is expected to double, according to Nigel Cokell, fresh foods manager at Booths.

“It has been a huge success and demand continues to exceed supply. We’re getting a superior-quality product and an opportunity to give our customers the full traceability they appreciate. Farmers have a selling system that doesn’t involve a middle man and pays a fixed premium price with a bonus and without any transport costs,” said Mr Cokell.

Pay a visit to any Booths store where the impressive fresh meat counter contains a display of native-bred beef and it’s clear this is a marketing success story. 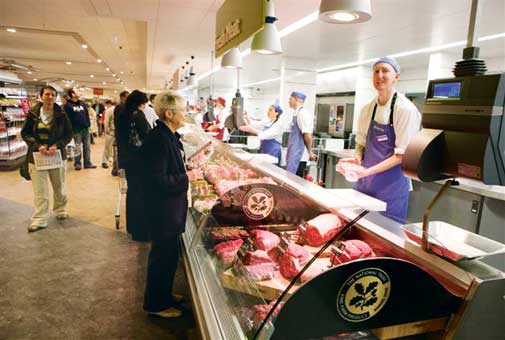 Each joint carries a distinctive National Trust label detailing not only the type of joint, but also the breeding of the animal that produced it, the identity of the farmer and name of his farm.

“It’s as though you’ve actually been to the farm and bought it yourself. A lot of shoppers have visited these areas of the Lake District, so it makes you feel close to the farm and how the cattle have been reared,” said Anne Short, a regular customer at Booths’ Clitheroe store.

Booths is well known for supporting and retailing locally produced food throughout its 26 stores across the north west. The National Trust logo and hand-written details on the label add a home-spun dimension to the firm’s fresh meat displays. Wherever possible, beef is sold in the store nearest to the farm where it was produced and, while the scheme has been focused on marketing hindquarter cuts through fresh meat counters, there are now plans to offer pre-packed lower-priced cuts and mince.

All carcasses are hung for 21 days to “dry age” before being de-boned and further matured for an extra seven days to achieve fullness of flavour. 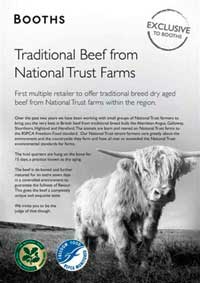 “Beef into Booths” won the National Trust’s Fine Farm Produce award as well as the Business in the Community “Big Tick” title last year and has 10 trust tenants supplying cattle. More would be welcomed, including store cattle producers, says David Hall, EFFP’s regional manager for the north of England.

“The positives of this are that farmers can plan because they have a fixed selling price and no volatility, also, they are talking directly to their customer,” he said. Mr Hall is now working with producers to more closely match production to seasonal requirements such as Easter and Christmas peaks.

For more than a year, farmers have been paid a competitive £2.80/kg deadweight for carcasses weighing 250-450kg in the E to 0+ conformation grade and classifying in fat class 3-4H.

Cattle meeting this specification also receive a £50 bonus payment. Booths pays all transport costs to move stock from farms to the Dunbia abattoir at Preston, the scheme’s dedicated slaughterer. Funds are also available through Booths and the National Trust for help with breeding stock purchase or improving on-farm infrastructure such as handling facilities.

RSPCA Freedom Foods accreditation is a requirement of the scheme, which also pays farmers’ membership costs.

The National Trust, which owns or manages 25% of the land in the Lake District, is committed to helping its tenant farmers achieve more profitable marketing for naturally produced stock with strong environmental associations for consumers.

“We soon realised after our initial discussions with Booths that the marketing of native-bred beef produced from a sustainable system had huge potential. Our aim was to market it in a way that would give consumers a high quality product that was totally traceable to a landscape so many are very familiar with,” said Neil Johnson, the trust’s regional farm and countryside adviser.

“Producing native breeds on farms where agri-environment schemes are already in place and developing a marketing strategy around that was like finding the missing piece of the jigsaw in terms of improving incomes on these farms,

“Our main involvement is to ensure standards of production on farm are maintained and that everyone involved is focused on the core principles of the initiative.

“We want to help tenants capitalise on their association with the National Trust and to gain recognition for the landscape management and conservation their farming practices deliver.

“There’s growing demand for native-bred beef and with no transport costs to pay and a guaranteed market at a premium price, it all adds to the financial stability of beef production on these farms,” said Mr Johnson.

The scheme was founded on cattle from six Cumbria farms, but now sources stock from 10 tenants in Cheshire, Lancashire and Yorkshire. Finished cattle are sired by Aberdeen Angus, Beef Shorthorn, Hereford, Galloway or Highland bulls.

Lake District beef producer Raymond Richardson is now selling all his finished cattle – around 50 head a year – through “Beef to Booths” and enthusiastically describes the impact on his business as “absolutely brilliant”.

“All those of us who are producing native-bred cattle on farms where the environment plays an important role in rearing beef on a natural and sustainable system, are finally able to access a market that acknowledges its superiority,” says Mr Richardson who farms with his wife Elaine at Burnt House Farm, Nether Wasdale.

He was one of the first farmers to commit cattle to the scheme from his herd of 60 pedigree Aberdeen Angus cows. This spring will see the first calves born to a Beef Shorthorn bull purchased with financial help from the scheme’s capital fund.

“We run on an extensive system producing finished cattle at 18-22-months-old with some concentrate feeding at the end, aiming for steers at around 360kg and heifers at around 290kg deadweight. Everything we produced last year hit the specification and so also earned us the £50-a-head bonus,” says Mr Richardson.

He’s convinced the scheme will endure and continue to expand to meet the growing demand from Booths’ customers.

“The way Booths has marketed the beef by giving it full traceability at the point of sale is proving that consumers will respond positively when given more information about where their meat is being reared and what it actually is.

“The integrity of the National Trust as a brand underlines the authenticity of the product and its all feeding back into the returns we’re getting for our cattle.”

Farmers have also benefited from Booths decision to pick up the tab for transport charges.

“Where farm labour is short, time spent taking stock to market or to be slaughtered adds even more to the costs of production. Many of us are a long way from abattoirs and auction marts. We’ve got the right product, but location has always been a handicap in accessing the market place.”

John Atkinson of Nibthwaite Grange Farm near Coniston is supplying the scheme with finished cattle from his summer-calving herd of Blue-grey sucklers and selling some cattle as stores at around 12-14-months-old to fellow National Trust tenant Andrew Leeming who farms at Fountains Abbey, Ripon, North Yorkshire.

“I used to sell all my cattle as stores to a finisher who had an outlet for native-bred beef, but I didn’t always receive much of a premium. This scheme has put a stronger base in the business and makes me feel more connected to the end market.

“I’ve got options to finish cattle at home or sell some as stores knowing that they will still come through the scheme as finished cattle. There’s openness about the way things are done and a commitment from everyone to make it succeed,” says Mr Atkinson who has been receiving almost £3/kg for his finished cattle taking account of the £50 a head bonus.

He too has benefited from the scheme’s capital fund, which provided 25% of the cost of buying a Beef Shorthorn bull to be used with the Blue-grey sucklers to improve carcase weights and conformation.

“Margins are tight for beef finishers and while the Blue-grey suckler is hard to beat as an economical producer of a beef calf, those of us who still keep them need a scheme like this to give these native breeds a chance to prove their true value.”