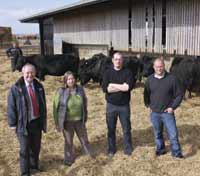 Buying an 840-acre farm, building a new farm steading and converting to organic production would be a huge challenge for any farming enterprise, but Andrew Robinson (Farms), Northumberland, have successfully managed to do so while reducing labour requirements and doubling output.

In the late 1990s the business, like many others, had started to struggle with its profitability, explains Judy and Lenny Fortescue, who farm in partnership with sons Charlie and Nick.

“We needed to reassess our situation and took advantage of a business development grant to appraise our business model,” says Ms Fortescue.

“It confirmed much of what we knew already, but its conclusion was blunt; doing nothing was not an option.”

Geoff Haddick of Lloyds TSB Agriculture held a similar view. “It was obvious production volumes were too low for the acreage farmed,” he explains. “A greater focus on improving output was needed to improve margins and secure a long-term future for the business.”

Increasing throughput and converting to organic was therefore, identified as a solution to the problem and by 2003 most of the land, which carries 520 mostly Angus cross and Limousin cross suckler cows and 1600 ewes, was certified organic.

Consequently the business benefited from a sizeable organic conversion cheque which was used to restructure the business. Cost savings were made on fertiliser and chemicals input costs, with red and white clover introduced to improve the quality of grass leys and maintain soil fertility and productivity.

Luckily, the vital cash boost also coincided with the farm becoming available to purchase, explains Ms Fortescue. And as a result the family were able to make a number of improvements.

“Because existing cattle sheds had become unfit for purpose, with low roofs and poor ventilation rendering them ‘pneumonia palaces’, plans were drawn up to relocate the steading on to a Second World War airfield on the farm which extends to 90 acres of tarmac hard standing,” says Ms Fortescue.

The new buildings include a main cattle shed, machinery workshop with storage area and stock isolation pens, and a large hay and straw storage shed which also doubles as a lambing shed.

The main cattle shed can hold 450 cattle and comprises a central feed passage with eight internal pens, each of which has access to a system of external pens allowing stock to be handled by one person. Investment in a large feeder wagon has also meant cattle can be fed quickly and efficiently.

Not many businesses can boast such significant improvements, but the Fortescues have managed it through hard work and a focused approach, comments Mr Haddick.

The farm aims to finish 60% of animals off grass at 18-20 months to minimise the number which are housed for a second winter and selects high EBV Aberdeen Angus bulls with good physical conformation, while working closely with the farm vet to improve productivity.

The vet’s advice and input goes well beyond treating ailing livestock, says Ms Fortescue. “Discussions focus on whole-herd improvement and general strategies for developing the livestock enterprises within the business”

Heifers are bulled at about 16 months and selected by weight and conformation and EBLEX figures are used to monitor performance against industry benchmarks.

With the help and encouragement of Lloyds TSB Agriculture much has been achieved in what has turned out to be a decade of transformation. An overdraft was put to good use, steadying the farm’s cash-flow over a period when 80 to 100 heifers were being retained annually to expand the breeding stock from 220 cows to beyond 500.

Business development is still a work in progress, with additional investment needed, but so far the objective has been to maximise output while holding down costs, says Ms Fortescue. “Investment in infrastructure has been balanced by rigorous monitoring of production and overhead costs.

And the improvement in breeding stock, coupled with reduced production costs and increased output, has given the Fortescues renewed confidence in the sector.

“There is still work to be done to be financially viable going forward, but with hard work and a fair wind, I think we will be ready to cope with the next stage of CAP reform,” she says.

And Mr Haddick shares this level of confidence. “There are four factors which affect the profitability of any business: Cost of production, market prices, volume of productivity and product diversity.

“Beef producers can have a positive influence over all four factors to a greater or lesser extent depending on their business model. In the case of the Fortescues, purchasing more land, producing more stock, improving the farm’s infrastructure and producing a high value organic end product has resulted in improved margins and they are now looking towards a profitable future.”