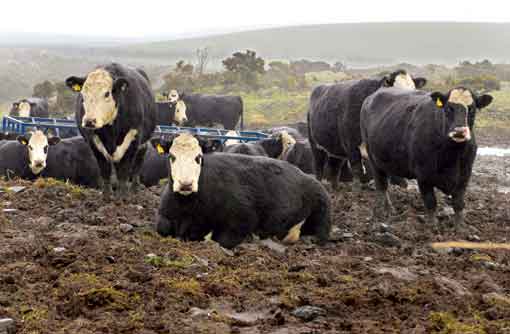 Livestock farmers are being warned to take care when outwintering stock, to avoid damaging soils and causing run off.

Although outwintering stock can be extremely cost-effective, there is always the risk of soil runoff and erosion, causing damage to soil structure and watercourses. At a recent Catchment Sensitive Farming event in Somerset, CSF officer Roy Hayes said that, done correctly, outwintering could reduce bedding, labour and machinery costs, and improve animal health. “But it depends on your soil and location – it can only be done well in the right place.”

Ideally, producers should choose level, well-drained fields away from roads and watercourses, move stock and feeders regularly to avoid poaching, and provide dry lying areas and shelter. “Gateways and tracks are very clear pathways for runoff, through which you will lose valuable nutrients, so try to relieve compaction and use top gateways where possible.” Minimising vehicular access, establishing good livestock tracks and diverting water away from collecting areas and gates would also help, he added.

Where sloping fields did get poached, farmers should consider ploughing horizontal buffer strips to slow down the pace of runoff, said soils specialist Jo Oborn. Most livestock poaching was fairly shallow and could be alleviated in the spring and autumn with a slitter or aerator. “This time of year is very good to dig a hole and see where the compaction is, as you can clearly see how wet or dry the soil layers are.”

Event host Caroline Spencer keeps 270 Jersey cross cows at Volis Farm, Taunton, where she has worked hard to improve her grazing system. “We are on a Crown tenancy, and don’t have many buildings, so to milk that many cows our only option is to outwinter.” The cows block calve indoors between February and April, and are turned out until November. They are then brought back inside when grass availability drops below 2150kg/ha of dry matter, and turned out in December when they dry off, until coming in again just prior to calving.

“I measure the grass every week with a plate meter so I know exactly how much feed is in every paddock. That way I can add cake or silage accordingly.” Mrs Spencer shuts up some leys in September, to ensure she has 2200kg/ha of dry matter on 1 February when she starts to turn the freshly calved cows back out. In total, she has 150 dry cows, 60 nine-month old calves and 60 in-calf heifers outside over the winter, grazing grass leys or grass alongside fodder beet.

“I don’t like seeing cows in 100% fodder beet because they are in mud 100% of the time. The cows absolutely love the fodder beet, and at £40/t DM it’s a cheap feed, but it’s only about 50% of their diet – the rest is silage or hay. I use the grass as a dry base for the cows to stand or lie on, and I’m sure that’s partly why we don’t get any problems with their feet.”

Mrs Spencer lays out silage or hay bales along the length of the field before winter, and then uses electric fencing to move the cows on to fresh ground every day, back fencing where possible to prevent the cows returning on to poached land. “We’ve had to invest in water troughs, tracks and fencing, but that’s cheaper than investing in buildings, machinery and labour. And the cows are so much healthier from being outside. It’s very simple – our philosophy is to keep it simple, cheap and profitable.”