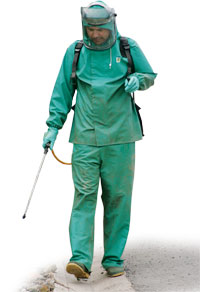 New regulations covering the use of pesticides might not be a priority for most livestock producers – but even use of a knapsack sprayer is affected by new rules regarding pesticide use and water protection.

Advisers delivering the latest DEFRA directives gave farmers at a workshop at Abbeystead, Lancaster, a detailed “stage by stage” practical demonstration of how operators must now undertake knapsack spraying to ensure they meet the new standards covering the handling and filling of this seemingly straightforward piece of equipment.

Patrick Goldsworthy, an independent consultant working with the England Catchment Sensitive Farming Delivery Initiative, was well aware that many livestock producers who use knapsack sprayers didn’t perceive them as posing a serious pollution risk, but he urged them to closely examine their handling and filling procedures and to adopt a new “mind set” to avoid pollution risks.

“All farmers thinking about spraying should first seek advice from an agronomist – and I know that can be difficult in predominantly livestock producing areas. But make a firm request to the people who supply you with chemicals and ask for advice as well as a visit to the area you want to treat. Get a written recommendation from them about what you should be doing,” said Mr Goldsworthy.

Certificates of competence are required for knapsack use, but farmers were advised to check the validity of their existing certification which in some cases may have been superseded by more recent operator regulations.

Mr Goldsworthy asked farmers what they considered to be the most important safety issue associated with using a knapsack sprayer.

“The answer is the weight of the spray tank. You’re putting 20kg of liquid and kit on your back and it can be a tricky operation when it’s done from floor level. My advice is to try using a table to give you more height and make putting it on that much easier.

“Knapsack sprayers can be tested, but it’s expensive so I recommend users follow the official knapsack sprayer check-list which gives farmers the opportunity to undertake their own assessment. That includes running it through with water to make sure there are no leaks and drips – those are the things you need to watch out for, not only for your own protection, but also to avoid spillage onto concrete and a subsequent risk of pollution.”

The site used for filling the sprayer should be assessed too and must be at least 10m from any watercourse. Filling with spray should be done carefully using a small container to make handling easier and avoid “glugging” and so reducing spillage.

Farmers were told that the valve in the nozzle of the spray should be set to low pressure. “High pressure produces smaller droplets and increases the ‘drip’ risk. You need to achieve a spray of chemical that goes where you want it to.”

Calibration should be undertaken before use – and with a knapsack sprayer that means assessing the walking speed of the operator.

“You should walk 100m and get someone with a stopwatch to calculate your forward speed – it should be about 1m a second. The rate of application is also controlled by the amount of spray that comes from the nozzle and that can be calculated by collecting it in a domestic, plastic measuring jug.

“Time the sprayer for 30 seconds and repeat two or three times to see how much spray you are producing. This will give the output of spray a minute.”

Local Abbeystead beef and sheep producer Robert Ayrton told the workshop that, while knapsack spraying was strictly limited on hill farms in the area that were involved in environmental schemes, spot spraying or using a weed-wiper was sometimes permitted.

He provided a seven-jet Logic weed-wiper, trailed by a quad-bike, as a static demonstration. This type of spray equipment could be calibrated according to the density of the weed-mass being treated – usually rush growth on hill land.

“We use Roundup in this machine but, although you can off-set the weed-wiper to avoid over-running, you’ve got to be very careful not to run back over the land once it’s been treated. If you do the tyres of the quad-bike will be smeared which will then deliver chemical to any grassland that’s subsequently driven over.”

Mr Goldsworthy told farmers that 40% of spray pollution problems occurred in the handling area where spillage occurred on concrete.

“Farmers should always remember to read the label of any spray they’re using; ensure they handle the chemical with competence and that they have an acute awareness of the risks they could pose to the environment if it isn’t handled and applied correctly.

“There are 52m hectares of land in England treated each year with chemicals and there are more than 3000 products using 320 active ingredients. A lot ends up in water courses through sheer negligence and that’s what this initiative is trying to stop by making farmers more aware of the risks and by helping them to fulfil the requirements of the new directives to protect water supplies,” said Mr Goldsworthy.