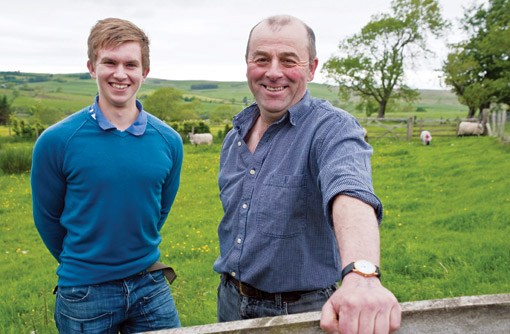 Securing a strong future for the next generation was one of the main objectives when the Pears family signed up as a Monitor Farm with the North West Livestock Programme in 2009.

Since then, Ken and Mandy Pears have increased suckler cow numbers and efficiency, improved sheep productivity and created a strong business for their son Chris.

The land at Fellside House, Caldbeck, is severely disadvantaged, with an average of 178cm of rainfall a year. The 55 Limousin cross British Blue suckler cows and 560 breeding ewes are run across the 107ha, with the farm also having grazing rights on Caldbeck common.

The flock comprises 230 pure Swaledales, 210 Swaledales bred to the Bluefaced Leicester to produce North of England Mules, and 120 Mules put to the Texel and Suffolk ram to produce finished lambs.

“We have achieved our objectives, which four years ago was part of an ongoing process for the farm. But what the Monitor Farm involvement has given us has been access to specialists – and the confidence to continue,” says Mr Pears.

“Our aims were not to change anything dramatically, simply to make a few tweaks to the system – but a few tweaks can have a big effect,” he adds.

Six Monitor Farms were established in the North West through the RDPE North West Livestock Programme managed by Myerscough College and delivered in Cumbria by Cumbria Farmer Network, with Myerscough and Reaseheath colleges managing the farms in Lancashire and Cheshire respectively.

Mr Pears says, like a lot of beef and sheep producers, he had been going along quite happily without looking at input costs such as feed and fertiliser. “Now we are looking at maximising our ability to grow grass as well as improving the productivity from our cattle and sheep,” he says.

“We need to ensure the cows don’t disappear from marginal and upland areas and I think the project has shown that a few adjustments can make a difference and, hopefully, encourage people to keep cows in the hills.”

The Limousin British Blue cross suckler herd has increased from 50 to 55 to spread fixed costs and, as well as a Limousin bull, a British Blue bull is now used on the herd.

The aim is to breed more heifer replacements to improve biosecurity and tighten the calving period. This will help maximise the number of heifers bulled at two years old to improve efficiency.

Calving for the past two years has been in a tight nine-week period, with the bulls going out on 7 July. The aim is to calve them at a condition score of 2.5. They are batched in three groups according to condition and fed on silage during winter housing.

“We hadn’t considered calving heifers at two years old, but SRUC’s Rhidian Jones convinced us of the benefits and that it was achievable,” says Mr Pears.

“We have had heifers that have calved at two years old and have grown into good, mature cows. Letting them run on to calve at three means these beefy cows can get too big for our farm – we’re looking for a cow with a mature weight of 650-675kg. Calving at two also saves on a year’s costs of keeping them and allows us to use their potential as soon as possible.

“We have been surprised at how well they have got back in calf – but the younger the animal, the more fertile it is. Weighing the heifers at bulling time at 14-15 months old has been critical. Heifers going to the bull are weighing about 440kg.”

Purchasing a cattle weighing facility with the help of a North West Livestock Programme grant in 2010 has been key to monitoring and improving the performance of the cattle, including batching the calves for more accurate feeding.

Another aim was to reduce feeding costs by condition scoring to better target feeding rates and to use more silage and straw in the rations to reduce concentrate use.

Specific advice on condition scoring and silage analysis has enabled more straw and silage to be used in cattle rations.

Steer and heifer calves are sold at Hopes Auction Company, Wigton, at three sales in March and May, at an average 13-and-a-half months old weighing 440kg and making more than £1,000 a head.

SRUC’s beef specialist Gavin Hill who advised the Pears family says running a beef herd to breed replacements, as well as producing store cattle is asking the bull to be a “jack of all trades”.

He believes it’s important to maximise the number of calves sold, not just the prices achieved, and that ultimately comes down to getting fertility right.

He advises producers looking to reduce their calving pattern to do so with care over several years. “When a higher proportion of the herd is calving down late, then taking the bulls out early will have a high number of barren cows,” says Mr Hill.

“Calving at two years old should prove more profitable, but the decision has to be based on breed, environment, climate and land type as well as how the suckler enterprise is managed,” he adds.

Vet Alistair Reid of Belle Vue Vets, Wigton, says the objective of improving the productivity of the sheep flock has been to finish a higher percentage of lambs by the beginning of August, while maximising the use of forage and reducing lamb losses from abortion.

A vaccination programme against toxoplasmosis and enzootic abortion, both of which have caused losses in successive lambings, has subsequently reduced lamb losses.

Traditionally, the farm maintained a pure-bred Swaledale flock and sold Mule gimmer lambs. For the past decade, Mules have been retained and crossed with a terminal sire to produce prime lambs, which Mr Pears says has worked well.

Batches of lambs have been creep fed, enabling finishing three weeks earlier than those without creep. A Suffolk ram was used for the first time this year and its performance is being looked at against the Texel.

Tests at Fellside House showed the land had sufficient phosphate and potash and, as a result, straight nitrogen was applied instead of a compound fertiliser.

This reduced fertiliser costs, and the improved forage quality also saved on concentrate costs during the winter.