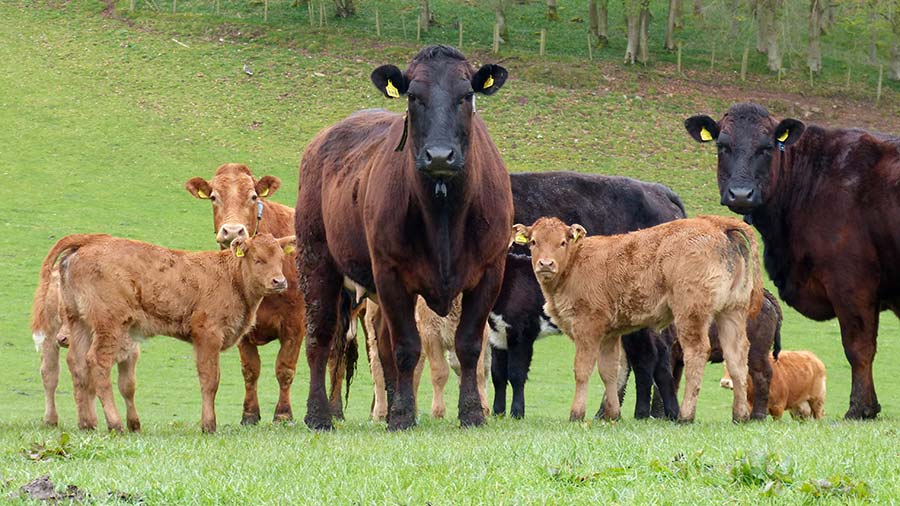 Supplementing a quality grass silage with a source of bypass protein before calving has improved colostrum quality, calf vigour and output on a Cumbrian farm.

The simple diet change has enabled Edward Dean and son Ollie to continue their restricted feeding programme for their 130 Limousin-cross cows at Kirkhouse Farm, Brampton.

The impact of the bypass protein – or digestible undegraded protein (DUP) – has been much more robust and vigorous calves from cows with more colostrum and milk after calving.

The improvement has come on the back of several other management changes at Kirkhouse since the farm signed up to be an AHDB Strategic Farm. They have:

Together, these changes have helped the Deans lift the number of calves weaned for every 100 cows bulled from about 87% to 91% over the four years since 2017.

A former dairy farm, the mostly spring-calving herd is housed in cubicles over winter before calving.

Historically, cows ran with bulls all year, but now a 12-week spring block has been achieved from 19 March, and only 12 cows still calve in the autumn.

It is fed to the cows through a mixer wagon at a 40mm chop length and pushed up twice a day.

Apart from a pre-calving mineral, this is all the cows used to get before the DUP was added, with the plan being to reduce body condition score (BCS) from 3.5-4 by 1 BCS over the winter.

A diet of 20kg freshweight of a 35% dry matter (DM) silage is just over 1% of the average cow’s (650kg) liveweight. Restricted feeding works as all cows can access silage simultaneously at the feed barrier.

“We’ve always tried to make good silage and then be restrictive with the amount we feed to avoid fat cows at calving and the associated calving difficulties,” says Edward. “We manage to calve most at 2.5-3 BCS.” 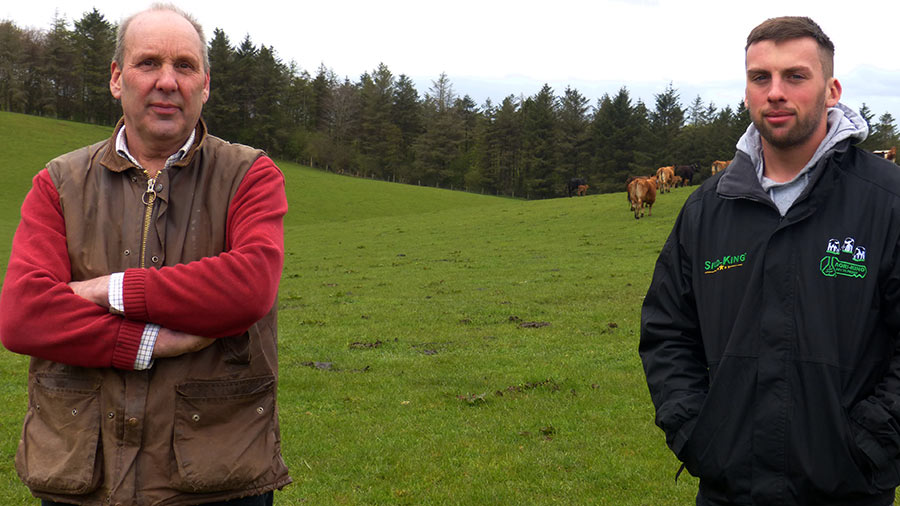 With the silage being high in quality, the cows’ energy needs are met, but late in gestation, the thinking was that there wasn’t enough bypass protein to support colostrum production.

A metabolic profile test was done in 2018 and analysed by Alex Corbishley and the team at the University of Edinburgh Royal (Dick) School of Veterinary Studies as part of a study looking at the passive transfer of antibodies through colostrum in 1,100 beef calves across the UK.

A total of 12 cows were blood-tested. Six were tested one week pre-calving and another six were tested three week’s post-calving to look at the cows’ energy balance and protein intakes (see “Metabolic profile tests for protein level”).

GGT is an enzyme found in large quantities in colostrum and is an indicator of colostrum consumption.

The results showed that energy (butyrate, glucose and non-esterified fatty acids [Nefa]) and minerals (magnesium and phosphate) levels were all fine, but protein was lacking.

The study found 14% (one in seven) of the 1,100 calves sampled had complete failure of passive transfer (FPT) of colostral antibodies and one-third had partial FPT.

Dr Corbishley says the service would typically cost £300 for a 12-cow test, or nearer £200 for six cows.

Dr Corbishley said: “The results showed that energy balance was good in the May calvers, as butyrate, glucose and Nefa levels were normal, so the cows weren’t mobilising body reserves at an excessive rate.

“However, the protein status was marginal, so feeding a protein source such as beans, rapeseed products, distillers or soya could be used to correct that.”

Debby Brown, veterinary technical manager at Dugdale Nutrition, analysed the silage ration and suggested adding 0.3kg a head a day of Hipro soya to the silage to get DUP into the cows for the final three weeks pre-calving.

This is easily covered by the extra five calves they sell each year.

“It was expensive this year, but we think very much worth it,” says Ollie.

“We bought a milking machine to harvest colostrum to tube feed calves in 2019 as they hadn’t been getting enough, and we’ve still not used it. We’ve had fewer slow, dopey calves.”

Overall, the ration is 15% crude protein for the final weeks of gestation, with the soya being 46-48% crude protein and about 30% DUP, which is added for at least three weeks.

The cows, which are split into three calving groups according to expected calving date, are fed accordingly.

“A more compact calving makes it easier to add the protein in for late calvers,” says Edward.

Cows calve inside in the old collecting yard, which has been fitted with gates and cattle crushes.

Calving is monitored via CCTV. About one-third of calvings are assisted in some form, with only 5% being a “hard pull”.

The system tries to produce strong calves to sell at 400kg or more at store sales using bulls rated highly for growth, but more focus has been put on milk and calving ease in recent years.

Cows and calves are penned up individually after calving and watched for 24-48 hours. Calves are then dehorned with paste, tagged and turned out to grass with their dams.

Cows get a high-magnesium mineral lick at grass, although this year, owing to slow grass growth, cows were supplemented with 1kg a cow a day of blend until mid-May.

Cows wear heat-detection and rumination collars that send bulling activity reports to computers and phones via the Allflex SenseHub system and an AI technician serves cows.