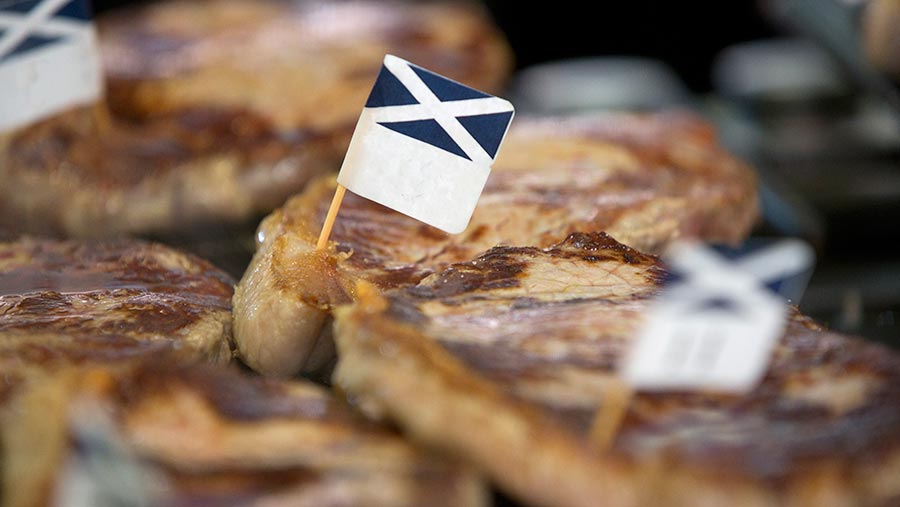 A campaign to counter vegan “misinformation” about red meat and livestock farming is to be launched in Scotland.

The Meat with Integrity campaign will be launched by Quality Meat Scotland (QMS) – the organisation that promotes and markets the Scotch Beef and Scotch Lamb brands.

The “upswell of the anti-red meat agenda” was among the key challenges facing the sector, said QMS chairwoman Kate Rowell at the Royal Highland Show on Thursday (20 June).

QMS was responding by putting extra resources into promoting positive messages – culminating in the Meat with Integrity campaign, which would launch on 29 July, she said.

“This will focus on getting across Scotland’s positive animal welfare and sustainability credentials, and counteract the misinformation and often completely inaccurate reporting which is all around us.”

The campaign will be fronted by four livestock producers representing businesses from across Scotland’s cattle, sheep and pig sectors.

Data published last year by comparethemarket.com suggested that 3.5 million people in the UK – or 7% of the population – now identify as vegan.

Up to 350,000 Scots could now be eating plant-based diets, it suggested, with 6% of Scots saying they had gone vegan and 14% considering it.

Ms Rowell said the amount of “anti-red meat clamour” seemed to have increased significantly since she took up her role as QMS chairwoman last autumn.

But she added: “It is important to remember that the Scottish public are on the whole extremely supportive of agriculture.

“We mustn’t forget that 19 out of 20 people still eat meat as part of a healthy, balanced diet.”

The public were rightly concerned about animal welfare and it was vital that people knew high standards were the bedrock of Scotland’s quality assurance schemes.

Marketing campaigns for beef, pork and lamb have all launched in the past year, including £325,000 of funding from the Scottish government.

A further £200,000 for lamb promotion this year was announced last month.