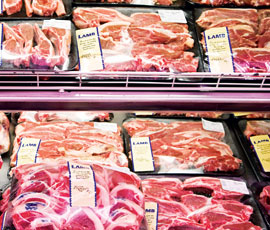 The red meat sector needs to get a better grasp of consumer demand if it is to take advantage of improved prices, according to the head of one of the UK’s largest meat processing operations.

Richard Phelps, managing director of Blade Farming, said beef and sheep farmers were seeing some of the best prices they had seen in years for their produce.

But unless they made greater efficiencies and efforts to produce what consumers really wanted, those prices would not be translated into increased profits.

“Prices are better but we have got to understand consumers. We need to get the consumer excited and innovate in the supply chain,” Mr Phelps told delegates at the EBLEX annual conference in Warwickshire on Wednesday (2 November).

“We need to focus on quality. Age profiles of herds are getting longer and consumers are starting to notice there’s a difference in quality. If we up our game then the world’s our oyster.”

Mr Phelps said consumer interest in value produce had grown, which had impacted in particular on the volumes of lamb being sold in the UK.

But he said that presented new opportunities in the types of cut and products being offered by the sector.

“The growth in discount shops has been staggering. For us as suppliers to retailers, we have to be very focused about the lines we put through because we can’t lose market share.

“Lamb has under-performed and we have got to look at how to offer different products and be smart about how we market it.

“There is still a group of consumers out there who aren’t concerned about the financial climate we are in though,” he added. “Some consumers still want a point of difference and they are happy to pay for it.”