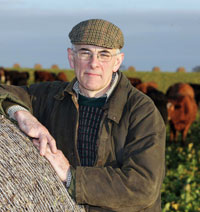 Want to extend forage supplies in a bid to cut feeding costs? Then outwintering stock on brassicas may be the solution.

But it’s not as simple as putting cows out on to stubble turnips, warns EBLEX’s beef and sheep scientist, Liz Genever.

“Outwintering is not complicated, but farmers need to look at where it can fit into their system, whether this is to be within an arable rotation or a reseeding programme,” says Dr Genever.

“Watercourses, soil type and what sort of stock you have all factor into outwintering. But new management guidelines focusing on using forage and better production of the land will aid producers with the set-up.

“For those farming in environmentally sensitive areas, outwintering is often ruled out because it is perceived that it increases surface run-off. However, this isn’t the case and outwintering in fact has support from the Environment Agency and Natural England.”

It is farming in an environmentally sensitive area that makes the host farm for an EBLEX BRP outwintering event an interesting case study.

Norfolk farmer Ian Spinks (pictured), who runs an 82-cow crossbred suckler herd as well as cropping 164ha of cereals, 60ha of rape, 42ha of sugar beet and 44ha of potatoes, has been outwintering cattle for three years, initially just on stubble turnips.

Mr Spinks says it was the need to cut feed costs that drove him to look at outwintering. “I was looking at how to reduce winter feed costs and, at the time, SAC had released its outwintering blueprint from its trials and the sums seemed to add up, so I tried it.”

After drilling the first stubble turnips in autumn 2006 and again in 2007, the cattle came off in good condition. But in 2008 Mr Spinks decided to increase the amount of outwintering on forage crops.

“Because a lot of our land is in the Country Stewardship Scheme, not being able to apply nitrogen means cows don’t get an early bite when they are turned out in mid-April,” he says. “Grass is usually in short supply again by August, so we wanted crops to fill the early and late bite.”

In February 2007, the livestock buildings at Grove Farm failed to comply with the Silage, Slurry and Agricultural Fuel Regulations 1991, and although these buildings have now been altered to house young stock, it forced Mr Spinks to look for alternative options, such as outwintering.

In addition to the 17ha of stubble turnips usually grown, this year Mr Spinks has also grown 10ha of Swift (rape/kale hybrid), 5ha of forage rye and 4ha of kale.

“Swift was planted for the late bite and the forage rye will be the early bite being fed from mid-March, with kale and turnips over winter,” he says. “Kale yields have been good, but due to the weather, turnips are smaller than usual.” 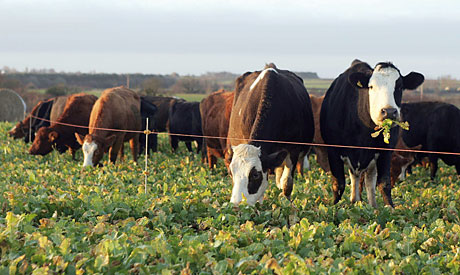 Cows are healthy and happier outside, and leaner than when housed indoors

Mr Spinks says Swift has maintained cow condition and the breeding of the animals could be something to do with them thriving in outwintering conditions.

“Initially, we were breeding Limousin x Simmental x Holstein replacements, but they were becoming too Continental and weren’t lactating well in our system, so we decided to bring in a Stabiliser bull.

“Although only some of the cows are in calf to the Stabiliser this year, gradually we will go 100% Stabiliser and, because of the mix of native breeds in them, they will, hopefully, thrive better when outwintered.”

The costs for outwintering certainly seem to stack up. Mr Spinks has calculated that with 55 grazing days on stubble turnips, the cost per livestock unit for every grazing day was 53p, for 25 days on Swift this was 75p and for 87 days on kale £1.14.

“This is compared to a calculation of £2.28/LU a day when feeding pre-calving cows on bale silage, ammonia-treated straw and 1kg a head a day of protein concentrate,” says Mr Spinks.

Apart from the obvious cost benefits of outwintering, Mr Spinks believes it has also reduced his carbon footprint. “Because there is less straw to cart about, less littering and mucking out, fuel has been saved,” he says.

“One thing we were worried about was lameness from outwintering, but this hasn’t been a problem. The cows are happier and look fitter outside because when they were indoors, they used to get slightly fat.”

Soil run-off hasn’t been an issue either and Mr Spinks says that because cows’ feet penetrate about 6in, leaving the surface dimpled, this stops soil erosion. “Outwintering leaves the soil in a perfect state to aid water retention, allowing rainwater to penetrate down to replenish the aquifer.”

The one issue raised by outwintering is which crop to follow it with. “We have tried both sugar beet and potatoes following turnips, but because the soil lies quite wet after turnips, it might not be possible to plough until the spring, which is not ideal for beet with our soil type,” he says.

But because Mr Spinks chooses not to plough before planting potatoes and is instead deep sub-soiling, potatoes do quite well when planted after turnips.

The only big difficulty Mr Spinks foresees is that with rape in the rotation, planting brassicas could see a build-up in disease, but he hopes this won’t be a problem because the area used for growing brassicas is so small.