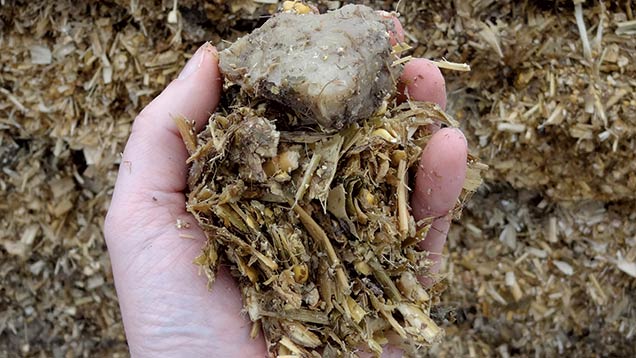 By replacing wholecrop and barley with the high-energy forage crop beta-maize, beef finisher Ben Hargreaves has saved £120 a head on feed costs.

“I wanted to use fodder beet through the summer, which we couldn’t do with fresh fodder beet, and I also wanted to replace wholecrop, which was too expensive at the time,” he explains.

Beta-maize first appeared in Denmark, where 33% crushed fodder beet was ensiled with 67% maize, but the concept is slowly being adopted by a handful of UK farmers.

“We plant the fodder beet late March to mid-April, depending on the weather, and harvest it in October – about 10 days before we receive the maize, which gives it some time to dry out,” he explains.

The beet is dry-cleaned through a sugar beet cleaner to remove excess dirt before it is ensiled.

“The cleaner rolls the beet around and rubs it a bit, making the excess soil fall off.

“We are actually on heavy soil here, which is probably more of a challenge, so it is quite important to harvest it in good conditions, when the ground isn’t wet or sticky.”

Despite these challenges, the
dirt tare of the 2013 crop was low at just 9.3%, which made ensiling it easier.

After cleaning, the beet is then chopped through a Harry West side-discharge muckspreader prior to ensiling and is alternately layered in the clamp, starting with 1m of maize in a ratio of one part fodder beet to four parts maize.

“We have to steam wash the muckspreader. We’ve found it gives us the right chop size. It breaks the beet into three or four pieces rather than pulping it down into finer pieces. We don’t want it chopped too finely because the sugar juices will run out into the maize.

“We spread about a 1m layer of maize in the pit first, and using a loader bucket we spread a thin layer of fodder beet. There’s quite a skill to it,” he adds.

Mr Hargreaves replaced the wholecrop and ground barley from his 2013 ration with beta-maize last year (see tables below).

The clamp was opened in April and the mix was fed to the finished cattle until September in the form of a TMR throughout the fattening period, explains Mr Hargreaves, who runs a herd of 65 Limousin-cross suckler cows and buys in store cattle to finish.

“The beta-maize diet has seen finished days pushed back a little by 14 days. But even on an alternative diet it shows days to finishing are not compromised by a large amount,” adds Mr Hopwood.

This year Mr Hargreaves has ensiled an additional 70t of beta-maize, and despite the fall in cereal price still estimates he will save 90p a head a day.

Mr Hargreaves adds: “By growing home-grown forage you are not vulnerable to the price peaks and troughs of cereal prices or the volatility of the grain market. It is a more consistent cost.”

2013 total mixed ration (before including beta-maize)

2014 total mixed ration (before including beta-maize)

Tips on ensiling and feeding from John Spence, seed sales specialist at Limagrain