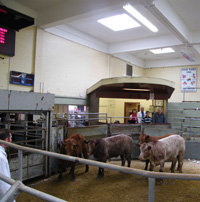 United Auctions conducted its last store cattle and prime sheep sales at its Kildean market site in Stirling last week, as the site was replaced with a new £15m agricultural centre officially opened on the outskirts of the town.

A total of 586 store cattle were sold last Wednesday (22 July), with bullocks averaging 170p/kg, down about 3p/kg on the week. Heifer prices were also down slightly to an average of 168p/kg, up to £3/kg.

The highlight of the last store cattle sale was a pen of 347kg Limousin-cross heifers from P J Laidlaw & Son, bought by Watson Bros, Croftgarry. “The lot realised £1040 per head, an excellent end to cattle sales at Kildean, with everyone looking forward with anticipation to a new era at the Stirling Agricultural Centre,” a representative said.