It was an English affair with two breeders from across the border both claiming the champion and reserve interbreed titles for the first time at the Royal Welsh Show on Monday (18 July).

Storming to victory to claim his third interbreed title this season was the November-2013 born Hereford bull Normanton 1 Leartes bred and exhibited by Tom Livesey and his son Will, from Packington, Leicester.

They name each cow from their 70-cow herd of pedigree Herefords after the mushrooms they grow for major retailers. 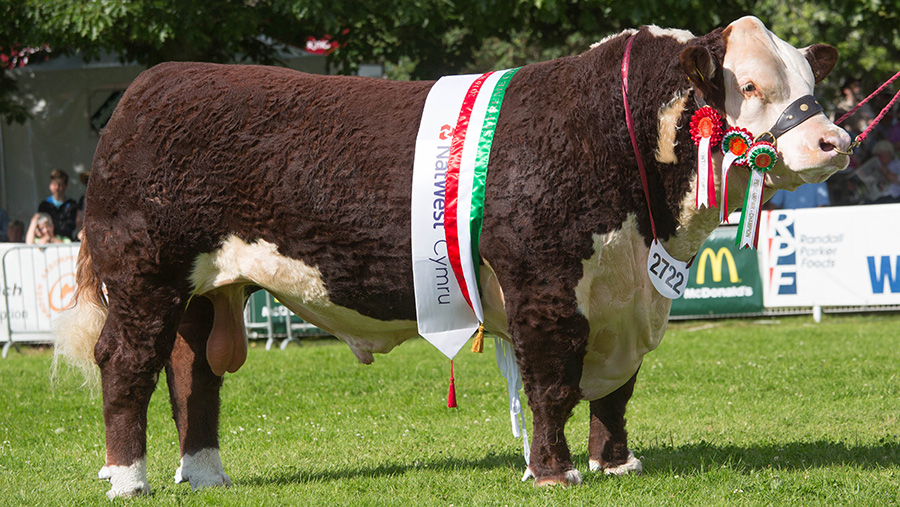 Sired by Romany 1 Distiller his dam is the prolific herd matriarch Normanton 1 Jews Ear C21, who has bred two male of the year award winners, and the Livesey family is hoping Learte will become her third.

It was the Liveseys third time showing at the Royal Welsh and they managed one better than in 2011 when they claimed the reserve interbreed.

Leartes has won a host of trophies this season including beef interbreed at the Royal Highland and Ashby Shows and male champion at Shrewsbury Show.

He will compete at Burwarton Show next month before heading to the National Poll Show, at Moreton In Marsh Show, in September.

In reserve, and also winning her first interbreed title at the Royal Welsh, was the third calver Popes Princess Cleo, bred by JH and VG Wood, Preston, Lancashire.

Sired by Banwy Wonderboy she is out of the herd’s multiple prizewinner Pope’s Nelly Princess, whose first son sold for 10,000gns in Stirling to Tom and Ruby Hill, Doncaster.

Cleo was shown with her two-month-old heifer calf at foot by Kilbride Farm Comber, who was bought by the Woods from the Robinson family, Northern Ireland, for 20,000gns at Stirling three years ago.