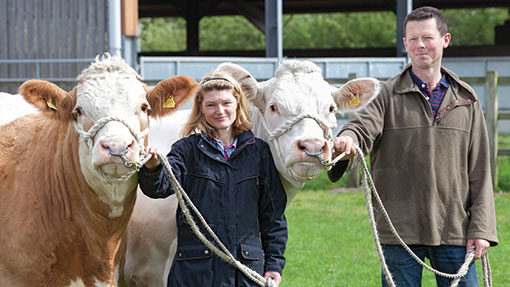 One pedigree beef breeder has reduced input costs while improving the eye muscle area of progeny.

Almost half of all beef carcasses sent to the abattoir fail to meet market specifications. It may sound shocking, but this is a reality facing the beef industry.

Pedigree beef farmer James Kimber believes eye muscle scanning is a vital tool that can help readdress this balance. So strong is his belief that he has been using ultrasonic scanning extensively within his herd of 32 mostly autumn calving, pedigree Simmental and Charolais cows for the past seven years.

The move has paid dividends and has enabled James and his wife Belinda to reduce rearing costs by £270 over an 18-month period.

One of the reasons the couple decided to focus on eye muscle area was to reduce input costs.

“We are in a 12-month TB testing area and we knew our end price would be affected by this, so we knew we needed to address our cost of production,” says Mr Kimber.

“It was a case of figuring out how we could take a step back and try and produce saleable bulls, but still make a profit,” he adds.

The closed herd is served to high-index AI bulls, which are selected for positive eye muscle area (EMA), calving ease and growth rates. Good feet and legs are also prerequisites.

“One of our most important traits is calving ease, because probably the first question a customer asks is the calving ease, and then we look for self-replacing index (SRI), because we want to breed our own females,” explains Mr Kimber.

The pedigree Simmental herd is the highest-scoring herd in the country for SRI and most of the females are over 100 points, he explains.

Meanwhile, the Charolais herd has won the Harman award twice in 2011 and 2013 for the greatest genetic gain in calf index within a 12-month period.

Two sires that have been used prolifically within the herd have been Mendick Butch 10, which has an EMA of +5.1% and the Charolais Alwent Goldbar, who carries an EMA of +6.8%.

Every beef animal born on the farm is scanned between 300 and 500 days of age for fat depth on the 12th and 13th rib and rump. This information is used to marry desirable maternal and terminal sires to increase saleable meat yield, which the Kimbers believe is going to become an increasingly important selling point among their beef finishing customers.

“We had two very similar heifers. One scanned 78 sq cm on eye muscle and the other was 112 sq cm, which gives about 35% more lean meat sales. But physically you wouldn’t have told them apart. It was quite a revelation,” he concedes.

Cost of production and feed efficiency

In fact, by using high-index bulls and placing more emphasis on eye muscle traits, the Kimbers have been able to reduce their cost of production, while increasing lean meat yield and improving the health of their bulls.

“What was really interesting for us is where we reduced input costs, eye muscle area went up.”

Bulls are sold for breeding at 18 months and since scanning and selecting for eye muscle Mr Kimber says they’ve reduced feed by over 1t, saving £270.

Calves are weaned between seven to eight months of age and then the heifers and bulls are spilt into two groups.

“The bulls receive a step rate feed up until the point of sale and the heifers are on a flat rate of 2kg a day to reach service weight of 650kg at 18 months,” explains Mr Kimber.

Previously, bulls were fed 4t of concentrate ad-lib, but this has been reduced to 2.9t on a flat rate, depending on the age of bulls (see table 1). This has driven feed efficiency, explains Mr Kimber.

A similar trend was seen with the Charolais bulls. Weights have fallen from 750kg to 705kg on average over a four-year period. Fat was also halved in the year 2012/13, but eye muscle area has improved from 147.1 sq cm to 153.1 sq cm – one of the highest eye muscle scores for the breed.

“Although the bulls produced in 2009 were heavier, the saleable meat yield was less.

“The most startling thing was the amount of feed required to put on not a lot of fat.

“The feed efficiency of putting on fat is horrendous. That extra tonne of grub was putting on 50kg growth, but two times the amount of fat, so the majority of feed was being wasted,” explains Mr Kimber.

He attributes this improvement in feed efficiency to the fact he is using AI bulls with a much higher index compared with previous years.

Monitoring growth rates regularly has been a key part of driving efficiency. “We record weights every 50 days for our own management information.”

“The only way to measure is over the scales. You can’t do it by eye. I don’t believe anyone is that skilled. You can’t guess the weight gained over a month.”

By focusing on eye muscle area they have increased saleable meat yield while reducing feed waste.

“You need a little bit of fat for flavour, but fat is so expensive to put on in terms of feed conversion efficiency (FCE), so we have reduced our inputs and feed but retained eye muscle.

“It reduces waste in the system and right throughout the chain, because it costs the processor less money to get rid of.”

The reduction in feed has also a positive impact on foot health, explains Mr Kimber, who is a full-time foot trimmer.

“There is a lot lower incidence of laminitis,” he says.

He believes overfeeding bulls only serves to shorten lifespan and believes breeders need to think hard about their breeding objectives. “You knacker their joints and feet. You shouldn’t be producing showy bulls. They are totally inefficient and they don’t last. They are not doing the industry any good.”

Mr Kimber believes an uptake in data recording by more producers will help create greater efficiencies in the supply chain.

“The trouble is you are reliant on honesty. There simply isn’t enough data being recorded. But the more information recorded the better the reliability [of that information].

“The beef industry has got a lot of waste in the system and it is costing money.”

He believes if just 20% more carcasses made the grade at abattoir, it would put a lot of money into the beef supply chain and he believes video image analysis (VIA) and ultrasonic scanning are tools that can help farmers achieve this.

A select number of abattoirs are already using VIA grading to give a more accurate prediction of saleable meat yield and Mr Kimber thinks carcass grading will eventually move away from the EUROP grid.

Those farmers already embracing change will be able to stay one step ahead of the game, he says.

“The only way the beef industry is going to move forward is by embracing that technology and getting the basics right.”

See more on profitable beef production at this year’s Livestock Event, including the latest advice on managing cattle, plus how to use EBVs to improve your herd performance.