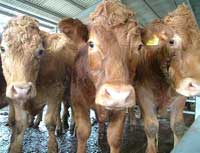 “Cattle have no spare lung capacity, so any damage to the lungs will have a huge impact on liveweight gain throughout a cow’s life.”

And the actual level of BRD in cattle is surprisingly high. “Research looking at cattle on a feedlot showed 35% of animals were treated for clinical signs of the disease. However, in reality, 72% were identified as having lesions on the lung.”

And when three out of the six lung lobes are affected this means a reduction in liveweight gain of 75g a day, 110g a day when four lobes are damaged and up to 200g a day when damage is extensive.

“A sample of 15 farms found all were affected with BRD to some extent. In fact even the best farms had 10% of lungs affected and the worst farms 100% of lungs,” said Mr Morris.

BRD can be caused by a variety of pathogens with pasteurella being the most common bacterium isolated in fatal cases and Bovine Respiratory Syncytial Virus (BRSV) causing edema and emphysema.

“Infectious Bovine Rhinotracheitis (IBR), which was identified in 67% of Northern Irish herds in 2008, also has a key part to play in causing lung damage,” explained Mr Morris.

“IBR is associated with damage to the lungs, windpipe inflammation and occasional emphysema.” And this is alongside high temperature, abortion and infertility.

“Because BRD can be caused by a variety of factors, correct diagnosis is essential – as always, prevention is better than cure and since implementing a vaccination programme for respiratory disease in Northern Ireland we have seen a marked reduction in BRD.”

Vaccination is the best action for BRD alongside providing good, well ventilated, dry housing with low humidity, he said.