Sixteen bulls made five figures and over at the society sale with 53 in all making 5,000gns and more.

This October 2015-born bull is an embryo calf by the noted Cloughhead Umpire and out of Nebo Favourite.

Purchasing the top price in a two-way split was Messrs Ridley, Haltcliffe, Wigton, along with Richard Harker for his 60-cow Honeymoor herd at Grayrigg Hall, Kendal.

Speaking at the close of the sale, Richard Harker said: “This bull is a very modern Limousin. He has tremendous length, is clean, and good on his legs. He carries a lot of style and has plenty of depth and quality in his pedigree.” 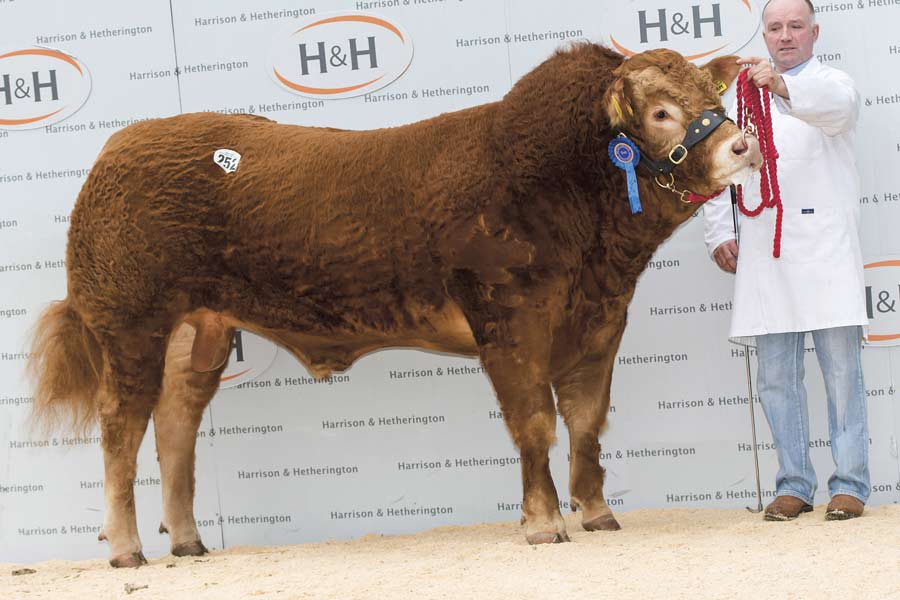 Two bulls made 22,000gns. The first of these was the junior male champion in the shape of Swarland Likelylad from A and D Proctor, Swarland Old Hall, Swarland, Morpeth.

September 2015-born, this calf is by the 23,000gns Fairywater Haig and is out of Swarland Fanciful, a daughter of the noted female breeder in the herd Brontemoor Apache.

An embryo calf, Gunnerfleet Lion is by Gunnerfleet Hicks and is out of Gunnerfleet Ilocks, whose dam line is quoted as having grossed the herd over £500,000.

Weighing in with an opening bid of 20,000gns, Gunnerfleet Lion was purchased by the 120-cow pedigree Whinfellpark herd of Messrs Jenkinson, Clifton Moor, Clifton, Penrith, Cumbria.

An embryo calf, Louisvuitton, is by the 22,000gns Guards Boomer and is out of the multi-title winning show heifer Foxhillfarm Gracie.

Following hard on the heels of the champion was the reserve overall supreme, Maraiscote Lothario, from the 150-cow herd of J Nimmo, Bogside Farm, Newmains, Wishaw, North Lanarkshire.

July 2015-born, Maraiscote Lothario is a son of the herd’s prolific stock sire Goldies Comet and is out of the Virginia Andy daughter, and second calver, Maraiscote Genie.

Having secured the fourth top price, the Nimmos then invested 18,000gns when buying Westpit Lowry from Andrew Gammie, Drumforber, Aberdeenshire.

A first prize winner in Class 10, Westpit Lowry is by Ardglasson Highlander.

He is out of Brockhurst Holy, who was purchased, in calf to Ardglasson Highlander, for 5,800gns at a sale at Newark Market, Nottinghamshire.

Another out of the junior section, this muscly bull is by the noted show calf sire Waindale UFO and is out of the Hartside Jacko daughter College Unice.

Selling at 17,000gns was the upstanding Culnagechan Lazio from the herd of Derek Hume, Randalstown, Co Antrim. June 2015-born, this calf was got by the AI sire Ampertaine Elgin and is out of Culnagechan Celine who had previously bred the 48,000gns Culnagechan Falcon.

This bull was knocked down to an undisclosed buyer in the north of England.

Following on from a strong sale at the Stirling Limousin Sale a fortnight ago, the Homebyres herd of Messrs John Logan, Humebyres, Kelso, made 14,500gns when selling their first prize winner to the Rhiwllech pedigree herd of  Messrs Howells, Gelli Farm, Cymmer, Port Talbot, West Glamorgan.

Mereside Leo from RM Hazard and Sons secured a price of 13,000gns for their third prize winner, Mereside Leo.

August 2015-born Mereside Leo is got by AI and is by Mereside Godolphin, who the Hazards bred and sold for 40,000gns in May 2013 at Carlisle.

Out of the Haltcliffe Dancer-sired Mereside Hougie, Mereside Leo was purchased by James Cooper for the Tomschoice pedigree herd at Hilltop Farm, Dacre, North Yorkshire.

A and D Proctor, Swarland Old Hall, Swarland, Morpeth, were back in the prices when another Fairywater Haig son, this time Swarland Leon, made 12,000gns.

A heifer’s calf, Leon is out of Swarland Helen, who is a half-sister to Swarland Hansy, who has produced bulls at 14,000gns.

Picking up this bull for their pedigree Hudscales herd was WR and JM Cowx and Son, Hudscales, Hesket Newmarket, Wigton, Cumbria 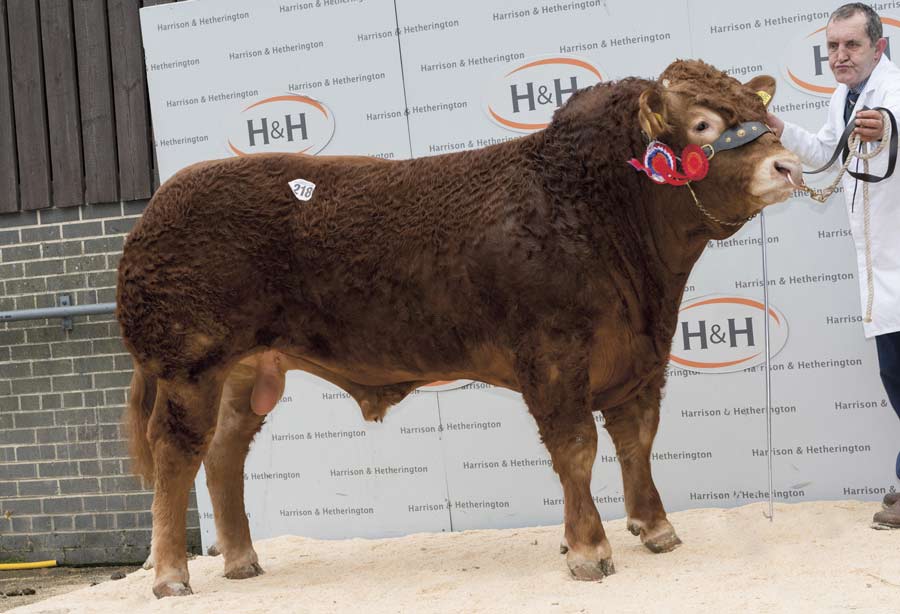 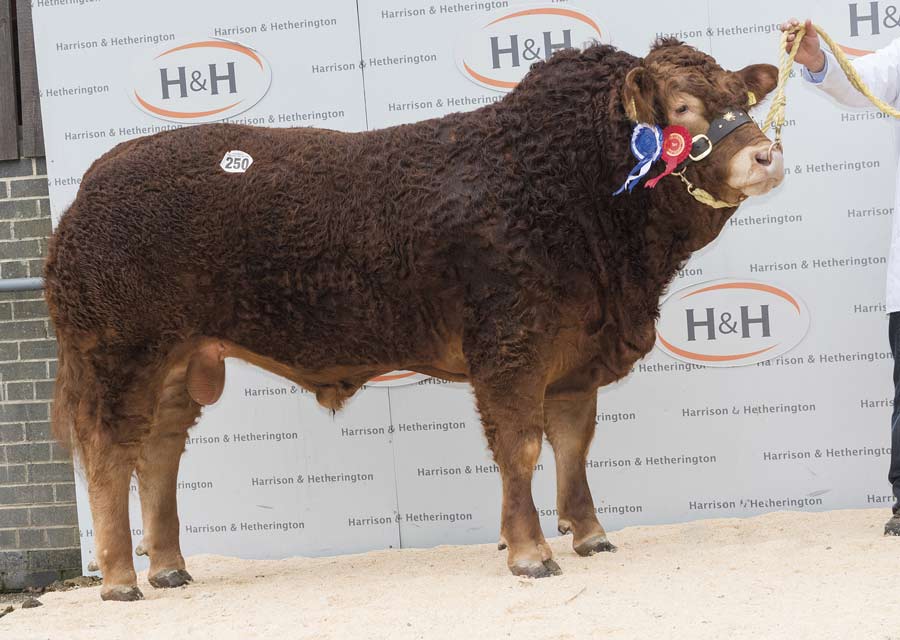 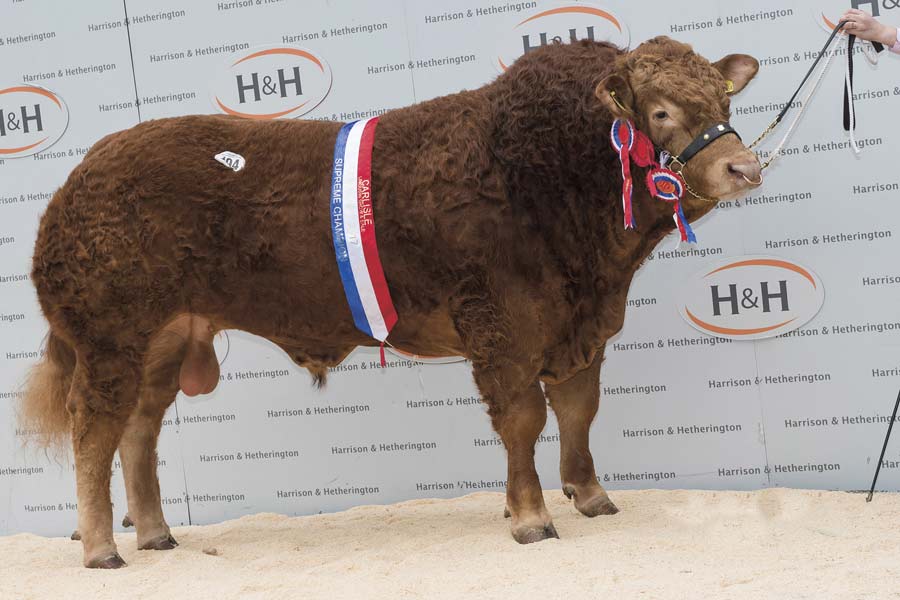 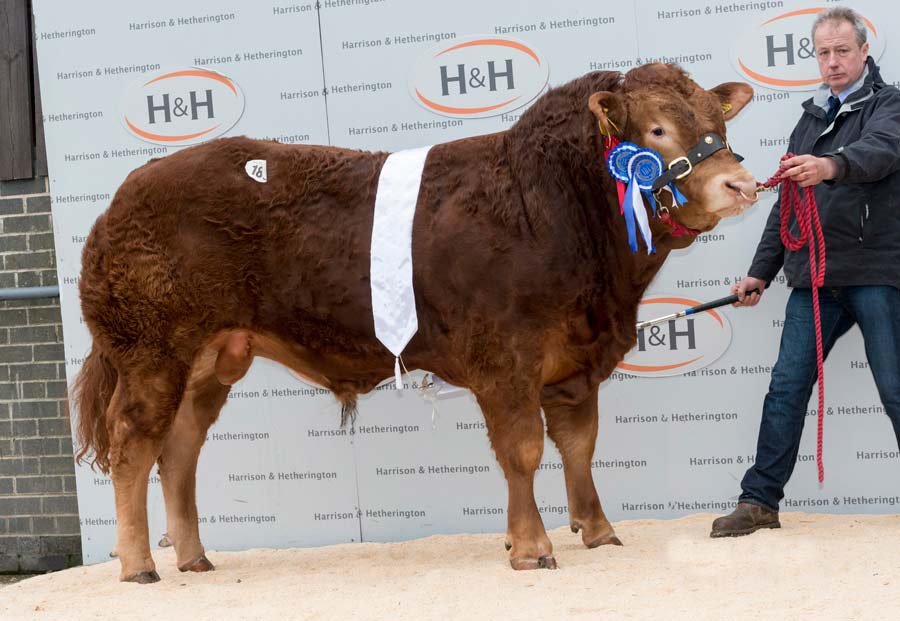