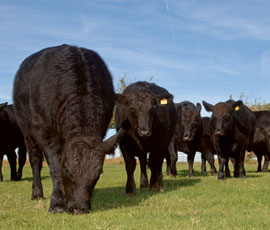 Farm leaders have blasted Tesco after the retail giant decided to stock beef from the USA in UK supermarkets.

Chilled carcasses of Black Angus beef from Minnesota are being imported to UK cutting plants before ending up on shop shelves.

The NFU said it was dismayed by the decision.

“It is therefore disappointing that some retailers feel the need to undermine producer confidence by sourcing foreign beef,” he said.

“A greater commitment from retailers to stock as much British beef as possible would send out the correct message to farmers to invest in production.

Unlike British farmers, US beef producers are allowed to use hormone supplements to increase the daily liveweight gain.

It is believed that Tesco’s US beef is produced without hormones – in line with European Union rules that have outlawed the practice on health fears.

American farmers are also allowed to feed their livestock GM soya and maize or corn – again a practice that is banned in Britain.

Mr Mackintosh said: “Our beef is produced to some of the highest standards of quality and safety in the world. Consumers recognise this quality.

He added: “British producers are ideally placed to meet domestic demand and reduce any reliance on foreign meat imports.”

A Tesco spokesman said US imports accounted for less than 0.1% of the fresh beef sold by the supermarket.

“The rest of our fresh beef is British and Irish,” said the spokesman.

“This is a premium product available in a very small number of stores. Tesco is proud to be the biggest customer of British agriculture.”