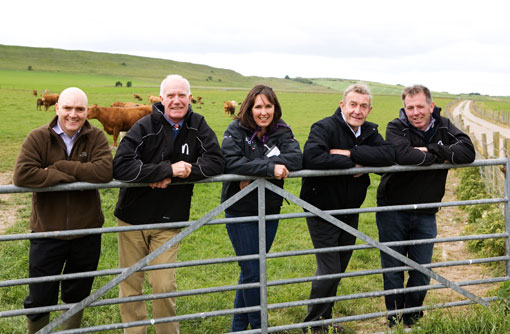 Combating escalating input costs is a challenge for any beef producers, including 2010 Farmers Weekly Farmer, and Beef Farmer of the Year, John Hoskin. Debbie Beaton finds out how he’s keeping costs under control

Rising feed, fuel and fertiliser costs are adding £50 to £60 an animal to the production bill at Maiden Castle Farm, Dorchester.

Speaking at an open day organised by Farmers Weekly Beef Farmer of the Year sponsors, McDonald’s, Mr Hoskin spoke openly to beef producers, calf suppliers, processors, abattoirs and McDonald’s about the challenges faced by him and the industry.

In fact the key to the successful growth of the Hoskin’s business has been understanding the market – and working with – the whole of its supply chain.

Maiden Castle Farm moved from milk to beef six years ago. A finishing contract with Blade Farming guaranteed a contract price with Southern Counties. Now the Hoskins manage 587ha at Maiden Castle Farm and 154ha in Cornwall on arable and grassland to raise 1,000 beef cattle, including 400 beef bulls, and 1,350 ewes.

He runs a streamlined business to deliver to animals with consistent fleshing and leanness for McDonald’s beef burgers. Black-and-white bulls are not everyone’s choice, said Mr Hoskin, but they are cheaper to buy than Continentals, so you don’t have so much money invested up front. Producing consistent quality means removing any bottlenecks that produce irregularities. So that has meant:

“We try to contain costs by buying forward, keeping the diet simple and looking for alternatives where we can.”

The farm has bought forward all its protein, which is mainly soya and rape meal, until the end of April next year. That helps reduce the total bill, but just as importantly Mr Hoskin knows in advance what costs he has incurred.

The Hoskins grow all their own feed so with grain prices at current levels, the ration “value” has soared. Normally 100% of all home-grown wheat and barley will go for feed, but with prices at £170/t plus, Mr Hoskin is selling high and buying forward cheap where he can – 300t of wheat sold were replaced with cheaper rye grain to keep costs down. “We always cost in the market value of the grain for our feed, as there is no point in our arable business subsidising beef.

“We could use maize grain or clamp silage or I am not averse to changing our hopper feeding system if that is what’s needed. The use of grain is purely dictated by the end price of our beef.”

Mr Hoskin buys black-and-white 14-week-old bull calves through Blade Farming from a dedicated rearing unit run by the Tudor family, based in Shropshire: “We know what we are buying, we know how they have been raised and that means we know how to handle them when they arrive.”

Consistency is key; the age range for each batch of bulls is no more than 28 days to ensure they all reach a 280-290kg deadweight at 14 months. “We always aim to fill an artic to take the animals to abattoir, rather than a lorry because it saves us about 2.5p/kg, which is significant when you spread that across all your animals.”

This spring the family have introduced a GPS system to refine fertiliser and spraying applications: “It has cut down the overlapping and I reckon we are saving £30 on a 8ha (20-acre) field – that’s a useful £1,000-£1,500 a year.” In addition all fertiliser is bought forward through a buying group and fuel is “bartered as much as he can”.

But costs are fine trimmed to the point where Mr Hoskin feels the consumer is going to have to take their share: “We already receive an enhanced beef price compared to the market base of 287p/kg, but I am not sure there is much more cost to be taken out of our business. I think consumers are starting to appreciate the global food challenges and that food prices are going to have to rise. We need a further 20p/kg on our beef to make ends meet; for the consumer that’s probably only 5p more for a burger.”