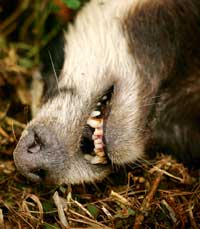 The government’s control strategy for bovine tuberculosis is inadequate and badger culling must be introduced to tackle the disease, veterinary surgeons have agreed.

A statement from the council said that the BVA had updated its TB policy to more strongly state the case for humane, targeted and managed culling in specific areas where badgers are regarded as a significant contributor to the persistent presence of TB.

The BVA’s policy also stated that the current government strategy for TB control was inadequate and it called for simultaneous control measures in both cattle and badgers and other wildlife and susceptible farmed species.

BVA president Nicky Paull said: “Bovine TB has an unacceptable impact on animal health and welfare and has the potential to be a risk to public health. Yet the current strategy for dealing with it is inadequate.

“Where I practise in Cornwall vets and farmers are desperate for effective measures to help us get on top of this inexorable disease.

“Veterinary surgeons take an active role in surveillance, diagnosis and treatment of disease and we know that the only way to control TB is through simultaneous and coordinated measures across all susceptible species,” said Mrs Paull.

“In no way does our new policy position detract from the continued focus on cattle-to-cattle spread, within both the veterinary profession and the farming community, which continues to play a key role in attempts to control the disease.

“But the BVA believes that humane, targeted and managed culling of badgers in some areas will be necessary if we are to reverse the increasing prevalence of TB,” she said.