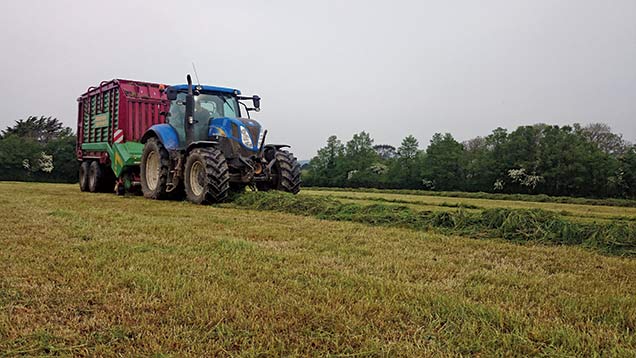 Introducing wholecrop into the annual reseeding cycle is allowing Cornish beef farmer Rob Halliday to get the most from his organic native South Devon cross Angus herd and speed up finishing times by six months.

Mr Halliday took over the 80ha Browda Farm from his parents in 2009 on a share-farming basis, but struggled to get the finished weights and grades from grass alone.

Back then the herd consisted of 26 South Devon, which were achieving 320-330kg off grass at 30 months old. But now numbers have increased to 55 sucklers and 80 finishers and yearlings, with an Angus bull used on heifers and difficult calving cows.

“We couldn’t get the finish weight and grades off grass and the cost of bought-in organic cereals was prohibitive, as the premium for organic is only 30-40p/kg, so last year we decided to introduce some pea and wholecrop barley into the mix,” he explains.

“Although this is the first winter we have been feeding it, cattle are growing considerably faster and we are hoping to finish at two years old, weighing 350kg, selling deadweight to ABP.”

Browda Farm, which is situated at the bottom of Bodmin Moor, has always grown decent white clover and grass. Leys are reseeded every five to six years to ensure they get good grass vigour and to avoid an invasion of grass species.

“Because we are already reseeding some of our grassland every year, introducing wholecrop into the mix provided a cheap top-up of protein, as the only additional costs incurred are for the seed and drilling,” he says.

Last year drilling cost £19/acre and the wholecrop seed £33.24/acre. The crop yielded 7-8t/acre with only manure ploughed into it.

Mr Halliday winter-ploughs the grassland and then spring reseeds. Old grass is ploughed in during the winter and a combination drill is used to drill in the peas and barley in the third week of April.

This is then rolled to consolidate the seed-bed and grass and red-and-white clover is broadcast over the top before a final roll is completed.

The crop is cut 12 weeks later in July with a set of mower conditioners. “We wind the conditioners right off so they are on the least aggressive setting and then bale it straight away.

“We don’t rake it as the more you knock it around the more losses you will get. Also, when we take the crop off the ground is soft, so we don’t want to rake stones,” he adds.

Mr Halliday has to bale wholecrop as he only has one pit on the farm. “We could layer the wholecrop into the pit, but you have to be very careful with the proportions. Baling it does cost us £19/acre more, but at least we are getting a consistent product.”

Wholecrop is not then fed until cattle are housed in November. Last year Mr Halliday grew 7ha and this year plans on growing 12ha as he’s seen a vast improvement in the quality of his cattle since feeding wholecrop.

Wholecrop is chopped through a baler to help increase intakes and is fed to finishers and weaners in the winter from six months old along with ensiled red clover and ryegrass.

The ration is feeding out at 29% dry matter,15.9% protein and11.2% metabolisable energy. Mr Halliday believes the red clover is adding significantly to the protein and also increasing the overall energy content. Straw in the ration helps stabilise the mix, despite pulling crude protein and energy down. “Without straw the diet could be low in fibre,” says Mr Halliday.

“If you’ve got a native-grass type breed then you have got to make the most from this type of system. Poor food conversion ratios with native breeds fed cereals are the reason we can’t make cereals pay, so we have to get the food conversion from grass.”

“We have always grown decent white clover and grass for grazing, but have tended to stay away from red clover due to its poor life span.

“Now there is a longer lasting red clover on the market we are growing that for silage as it is much higher in protein than white clover and will also help boost the protein of our youngstock and finishers.”

During the summer suckler cows, youngstock and finishers are all out at grass and are grazed on a 20-28 day rotation. Leys consist of a mixture of diploid and tetrapoid varieties.

“We don’t cut fields into paddocks as we’ve got 62 fields so just run a field grazing system.”