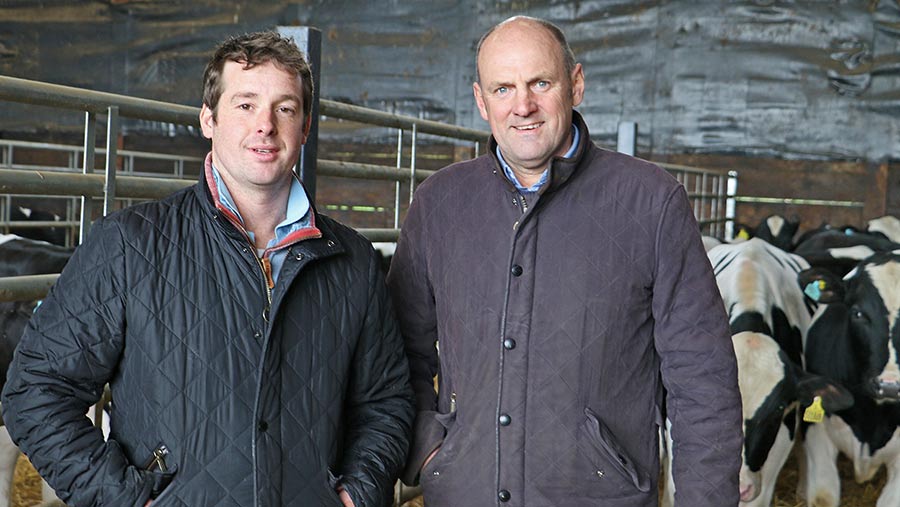 Mr Preece believes the venture is delivering better profits of £150 a head minimum and is helping to improve farm cashflow, with 300 head sold in batches to Buitelaar year-round.

With the area becoming a hotbed for TB, he established an approved finishing unit (AFU) last year to ensure he could still trade cattle.

He credits the business changes with giving him the ability to “farm in confidence” by eliminating trading risks and reducing price volatility.

Mr Preece, who farms a 202ha mixed, tenanted farm in partnership with his father, Neil, in Bridgnorth, started supplying Buitelaar four years ago.

They had been finishing bulls to 500kg-plus under 16 months of age and selling them through their local market, but they wanted to expand the operation.

They opted for an integrated beef supply chain because they felt it offered them more consistent returns.

In the past two years the price Buitelaar finishers receive has only fluctuated 20p/kg. Finishers are currently paid a flat rate of £2.95/kg on a 220kg deadweight carcass, graded P+2 or better, and with bonuses available for reared calves sourced through their supply chain.

As feed and straw prices fluctuate, margin per bull can naturally vary and at times it may not be the best return available.

However, Mr Preece says the fixed-pricing system offers them security and allows them to better budget and forecast cashflow.

Another element that attracted Mr Preece to Buitelaar was the fact cattle are finished by 11.2 months on average, which helps him take advantage of younger animals’ superior growth rates and increases business throughput.

In order for the bulls to be classified as rose veal they must be fed no grass or grass-based products and be slaughter aged less than 12 months (see “Labelling rules for beef younger than 12 months”).

Mr Preece sources calves from dairy farms that are audited by Buitelaar and he collects them from the company’s Wrexham collection centre.

The calves typically weigh 65-90kg and are aged between four to six weeks, with a group of 15-20 bought each time.

Calves are graded at the collection centre based on weight and conformation, with Mr Preece paying about £80-£120 apiece. 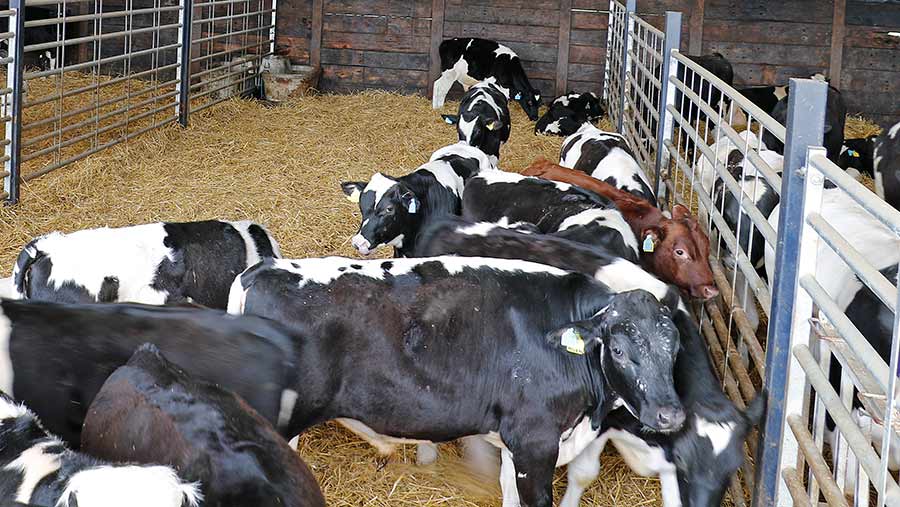 Unlike other integrated beef supply chains, farmers supplying Buitelaar can own the animal and pay for all rearing costs such as vet and med, straw and feed. Buitelaar also offers to underwrite calves from day one.

Although Mr Preece could buy calves after they’ve been reared, he prefers to do this himself because it’s one less movement and potentially one less check in growth.

On arrival, calves are put in groups of five in straw pens and are fed 2.6 litres of 21% crude protein milk powder mixed at a ratio of 184g of powder per litre of warm water on a five-teat milk feeder.

Alongside this they receive fresh water and ad-lib straw and 17% crude protein pellets.

Calves are vaccinated for pneumonia on arrival and are dehorned two weeks later.

They are weaned at 15 weeks of age and batched into groups of 30, when they are introduced to a 50/50 pellet and rolled cereal blend, which consists of 50% home-grown barley and 50% wheat, with a urea-based protein, molasses and yeast.

This is gradually increased and by five months the cattle will be fully transitioned on to the cereal mix, which they stay on until finishing. 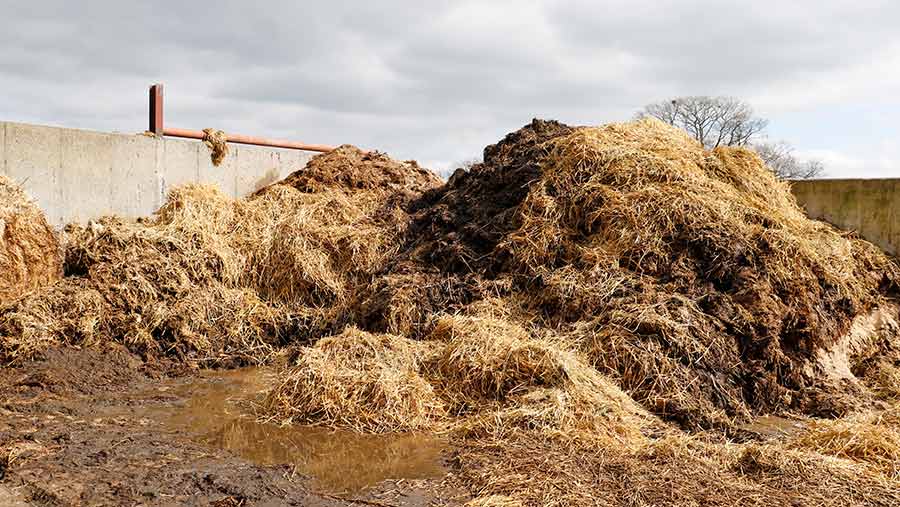 Terry Coupe, head of integration at Buitelaar, says cattle can’t be fed silage or haylage because it can taint the colour of the meat, whereas feeding barley ensures fat is very white.

Each animal is given a management tag and is weighed every 60 days with cattle moved down a group if they are underperforming up to six months.

After this age Mr Preece believes animals start to bully each other, so he tries to keep social groups consistent.

Currently, average daily liveweight gains post-weaning are 1.6kg. Quality feed plays a big part in achieving this, but housing and plenty of fresh air is another, believes Mr Preece.

Last June, the Preeces applied to convert two buildings – one calf shed and the finishing shed – into two separate AFUs and spent £7,000 making alterations and wildlife-proofing the buildings to meet Apha standards.

Disused indoor silage pits were converted to make way for the AFU. Spanning 20m long by 13m wide, it cost £3,500 to erect pens.

Metal posts that slot into the concrete were used to make clean-out and disinfection easier, with a similar design followed in the calf unit.

A fully contained, separate muck heap was created to store manure for 21 days after it is removed from the shed to minimise any risk from potentially infective manure.

Other AFU stipulations means there can be no gaps wider than 7.5cm and gates has to be a minimum of 1.5m wide and sheeted to prevent wildlife access.

Two VES fans costing £400 each were fitted inside each building to improve airflow. 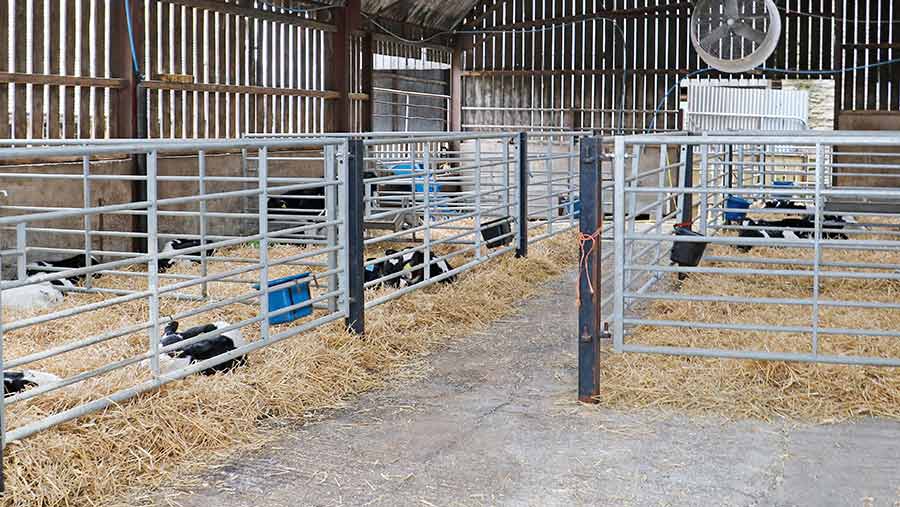 The separately managed suckler herd and any calves not housed inside the AFU are subject to annual testing and tracer tests.

It means that if a neighbouring farm fails its TB test, or if a purchased animal triggers a tracer test, Mr Preece won’t have to test animals inside the AFU. He can continue to sell stock direct to slaughter (or under licence to another AFU).

It also permits him to buy calves from TB-restricted herds to enter the AFUs, providing they have had a clear TB test within the past 90 days. There is no statutory TB testing within AFUs and if a TB reactor is found at slaughter, it does not trigger testing on neighbouring farms either.

“We were having so many tracer tests and we couldn’t trade. It doesn’t do your budget or cashflow any good, but now we can farm with more confidence,” adds Mr Preece.

He has already reduced Limousin and British Blue-cross dairy cows from 45 to 15 and hopes to sell the remainder next year so he can expand the finishing operation, which he believes is more profitable.

He says he can finish more bulls and make more money than his suckler cows with store cattle, leaving a profit margin of £100 at best.

Economies of scale is a big asset, explains Neil Preece.

“Where we had 15 sucklers we can have 45 bulls. You can keep three bulls instead of a cow and calf and have three lives making money in comparison with one live calf. And if the calf dies you don’t earn anything.”