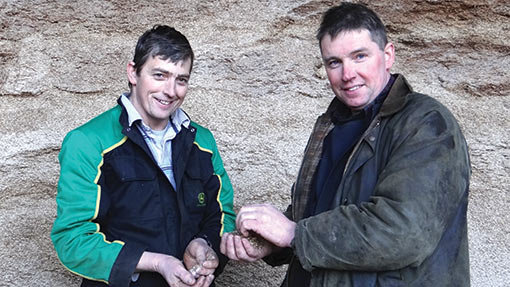 Making money out of cull cows is not easy, but crimped cereals are proving to be a cost-effective way to rapidly put condition on the animals.

Running a largely arable operation on 260ha at Hillhead Farm, near Morpeth, Northumberland, brothers Martin (pictured right) and Richard Grix (left) are buying in cull cows as an additional income stream to their family business.

Buying culls that are often in poor condition from market, experience has taught them how to identify those with potential to put on weight. They have also identified how to feed them to achieve the fastest weight gain and get them through the system in less than 90 days.

“When the meter is running at £2/day – which includes the cost of feed and bedding – it soon stacks up, so you have to move them on.”

However, a daily cost of £2 is considered by industry standards to be low, due to the feed ingredients used.

“In the early days we used to feed them a rolled cereal diet, but found we got a lot of acidosis,” he says. “They just weren’t used to cereals – some had only ever seen forage.”

Opting for a mixer wagon to cut the use of dried cereals and acid loading, they also looked at by-products to help keep feed costs low.

“Once we had the wagon, the ration was based on straw and pot ale syrup [a by-product from whisky distillation] with fruit and veg such as melons and potatoes added to the rolled cereal base,” he says.

However, the cost of growing and drying cereals took its toll on the business’s bottom line, prompting the brothers to seek a cheaper alternative.

“The more we thought about it, the more illogical it seemed, as we were basically drying the grain to 15% moisture to then mix it with a wet ration.”

Aware of the possibility of preserving moist cereals, they sought advice from Michael Carpenter at feed preservation specialist Kelvin Cave.

“The best option was to harvest at about 33-35% moisture, crimp the grain using a buffered organic acid-based preservative and store it in a clamp,” Mr Carpenter says.

There were many attractions, including an earlier harvest – about three weeks before dried cereals – and a higher feed value, as the crop would be harvested at its maximum nutritional value. There was also less acid loading on the rumen than conventional cereals and it made storage easier.

“We expected a higher tonnage and we’re definitely getting an extra tonne to the acre. It gives us a longer harvest window and the earlier harvest allows us to start sooner with cultivations for winter cereals or oilseed rape. And it’s definitely more animal-friendly.”

The result is a cheaper ration, no acidosis and easy storage on the farm, while the earlier harvested straw – which dries on the field for five to seven days before baling – is said by the brothers to make better-quality feed than drier straw.

They have now turned 220ha of the farm over to wheat and barley, most of which will be used for crimping and none will be fed dry.

“We’re harvesting about 4t/acre for crimping and putting about 1,650t in the clamp, so that should get us well through the year,” says Martin.

With their cost-effective system in place, the brothers are happy with the profits from the cull cow finishing business. They cost every individual cow that leaves the premises and return a margin of £50-80 a head.

“It’s probably not quite as easy as it looks,” says Martin. “We’re buying a waste product to start with – there’s a mortality rate and there are inevitably problems, whether that’s attitude, mastitis or feet.

However, he admits the rewards make the enterprise worthwhile.