The Parthenaise breed is one of the oldest in France and has been refined over the past 50 years to produce high-quality beef.

Beef farmer James Duerden, of Killerwick Grange, Dalton-in-Furness, Cumbria, is capitalising on this premium by switching to the breed. 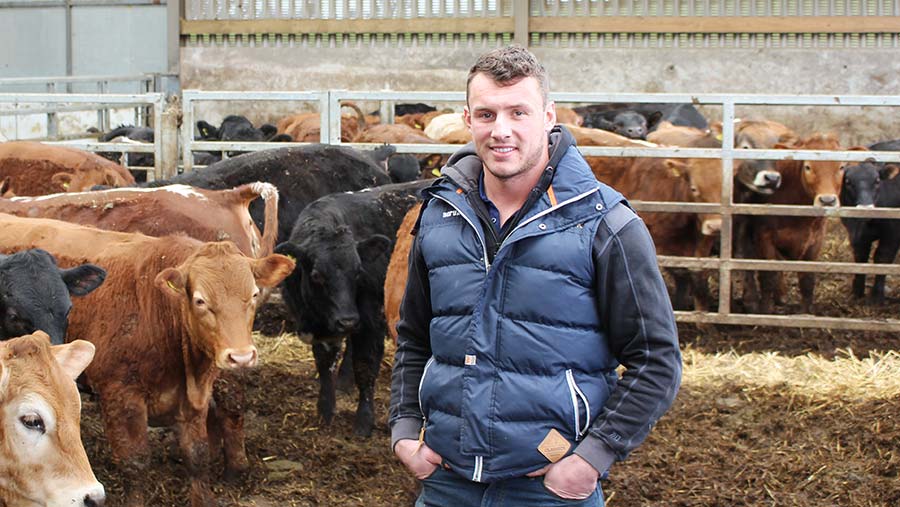 He first came across the breed when he bought a Parthenaise cross bull from his uncle 10 years ago and used it on his herd of 40 Longhorns and cross-breeds.

He was so impressed with the bull’s calving ease and the offspring’s growth, muscling and kill-out percentage that it enticed him to take a trip to France in 2012.

This resulted in Mr Duerden importing five in-calf cows with heifer calves at foot and so he decided to start his own herd. 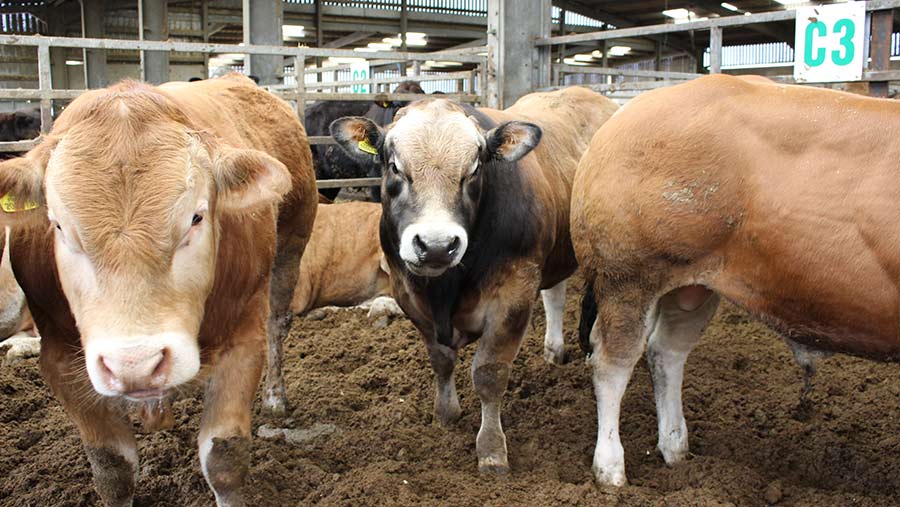 When establishing his herd, he focused on quality, rather than numbers.

“I wanted to breed a cow that wasn’t extremely muscled, that had easy-calving figures, low intramuscular fat, frame and was also milky.”

Coming from a meat processing background – his parents formerly owned a local abattoir – Mr Duerden was aware of the importance of meat quality and killing-out percentage.

“With a Parthenaise-cross, you can get a killing-out percentage of up to 68%, and with a purebred you can get 70%. This compares with an average in other breeds of about 50-55%.

The meat percentage is also very high, with a purebred about 80%, which gives more profit to the farmer and processor. They would usually grade between a U and E,” he says.

All the cows he imported have been part of a French breeding programme called Genetique Elevage.

This scores the breed based on muscular development and growth (for better carcass yield) and the suckling ability of the dams (for better calf growth rates).

Their genetic improvement programme aims to produce males and females that yield more than 400kg of saleable carcass, classify E and U grades, while holding on to good-value functional traits.

Every year, Genetique Elevage performance test the best 100 weaned males selected from the 230 farms in the breeding population.

In the past seven years, the purebred Parthenaise herd at Killerwick Grange has been slowly built up to 60 – with 20 purebred cows, three purebred bulls and 37 followers now in the herd.

Mr Duerden has been buying bulls, young females and cows and calves, as well as semen and embryos in order to speed up genetic gain.

The farm has three Parthenaise stock bulls and one Parthenaise bull out of a Limousin cross British Blue cow, which is used on the 20 breeding females, and 80 cross-bred cows comprising Longhorn cross Parthenaise.

Eventually, Mr Duerden wants to phase out the cross-breeds and just have purebred Parthenaise, with the aim of getting up to 100 breeding females in the next five to six years.

Each year, Mr Duerden flushes the best three to four animals and implants the eggs into recipients.

Six weeks prior to flushing/implanting, both recipient and donor cows are put on a diet that is oil rich and high in energy and low in protein.

The diet provides an optimum pH for flushing and for embryo survival in the recipients.

Conception rates are currently hitting 60%. Cows calve in the spring and are housed over winter and turned out in the spring.

“We undersowed barley in with the lucerne to help provide shelter and it worked well.” he says.

Finishing stock are fed a TMR of grass silage, wholecrop and lucerne. Last year, the silage averaged 13.7% protein and 14% sugar and the lucerne had 40% dry matter.

Mr Duerden has also overseeded some of the permanent pasture with herbal varieties. He says: “The herbal leys flavour the beef and act as a tonic in the rumen to aid health.

“The lucerne we are growing is also thought to reduce cholesterol in the meat. “We are trying to feed a grass-based diet that aids growth, but also flavours the meat and has health benefits.”

Heifers killed at 18 months are averaging about 400kg, in comparison to a two-year-old Longhorn, which would average 350kg.

On average, they grow upwards of 1.5kg/day, with young bulls finished upwards of 400kg at 16 months old.

The aim is for the stock at Killerwick to be sold for breeding, and any not making the grade to be finished to supply local restaurants and a major supermarket.

Already demand is growing for the genetics in beef and dairy herds. Mr Duerden says: “We have already sold some young breeding bulls into pedigree herds.

“For high-quality cows, we can make upwards of £6,000 and the same for bulls. “We have also sold embryos in the UK.

“We have a farmer in Puerto Rico wishing to buy some embryos, as the breed works well in hot climates due to the dark skin on their extremities.

“Commercial men showing cattle are also interested as the cross-breeds produce a lot of dark colours and with the double muscle gene, they make fancy show cattle.

The breed also suits dairy farmers as they are easy calving and have a shorter gestation length of about 280 days, says Mr Duerden.

The calves are often black, so premiums are often achieved for dairy-cross calves at auction.

Being a high-health herd and with a shortage of Parthenaise genetics in the UK, with only about 20 registered herds, Mr Duerden has started selling semen through various semen companies and direct to farmers.

“Over the past two years, we have had various semen companies approach us.

“We have now sold semen into South Africa, Australia, Ireland and eastern Europe,” he says.