Higher wintering costs were felt in the Simmental ring at Stirling on Monday (19 February), as averages slipped £598 on the year to £5,477.

Quality and demand was good, but budgets had been hit by a long winter and higher feed and bedding prices, said British Simmental Cattle Society chief executive Neil Shand.

“Figures made little difference on Monday,” he told Farmers Weekly. “Health status mattered more. I think this is because the Simmental is a relatively easy-calving breed.”

The Islavale herd of WS Stronach, Grange, Keith, had the two top calls on the day, topping trade at 24,000gns with Islavale Heston, a Ranfurly Confederate out of Curaheen Bandit son Islavale Fran. 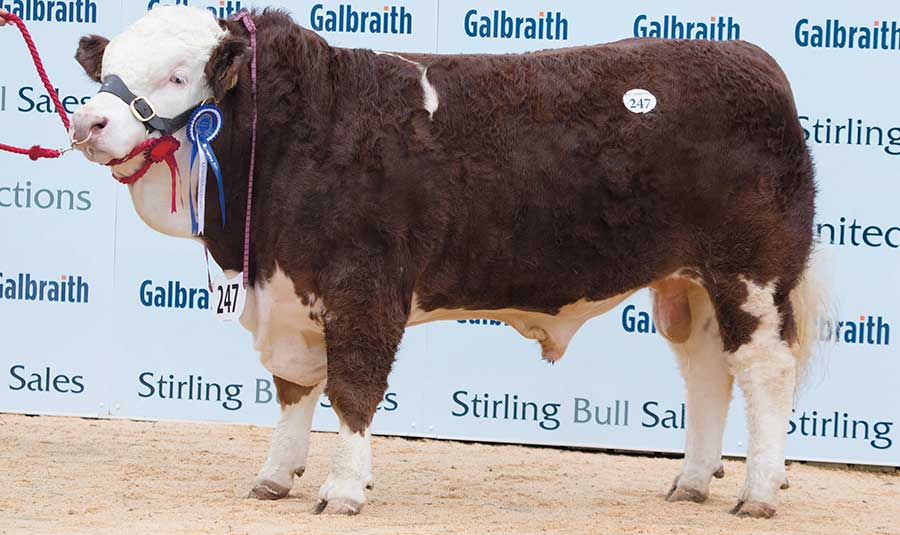 His figures suggest a milky, easy-calving bull with lots of growth, which attracted a winning bid from R McCulloch, Armadale, West Lothian.

Next at 16,000gns was another Ranfurly Confederate son, Islavale Harvest, selling to WH Robinson and Sons, Ballyclare, County Antrim. He is out of Woodhall Walker daughter Raceview Aisling Matilda. 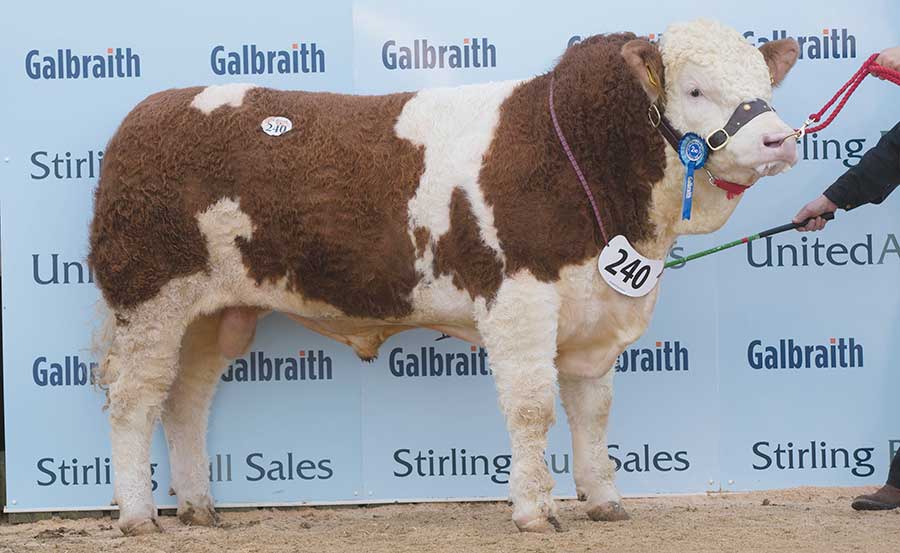 At 14,000gns came the leading female and the highlight from the Woodhall herd major reduction of H and J Macaskill’s remaining autumn calvers. Woodhall Flair is by Curaheen Commanche and out of Woodhall Amber, an Annick Talisker daughter.

She was born in March 2013 and ran with Islavale Frontier from mid-November until the sale. She went home with P McDiarmid, Lawers, Aberfeldy, sold with a bull calf at foot. 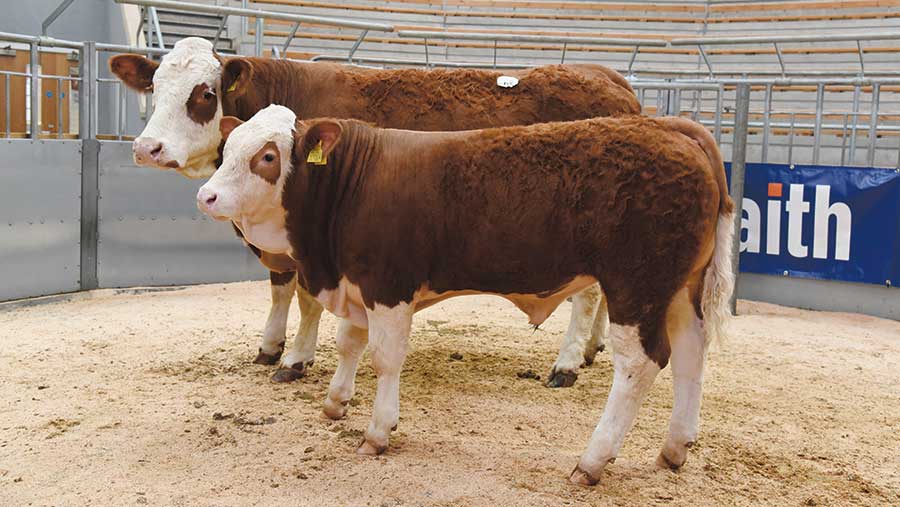 Next at 12,000gns from Stubbs and AA Burleigh, Crummy, Ballindarragh, was Camus Harold, bred by J Campbell. Camus Harold is by Kilbride Farm Newry and out of Camus Easter. 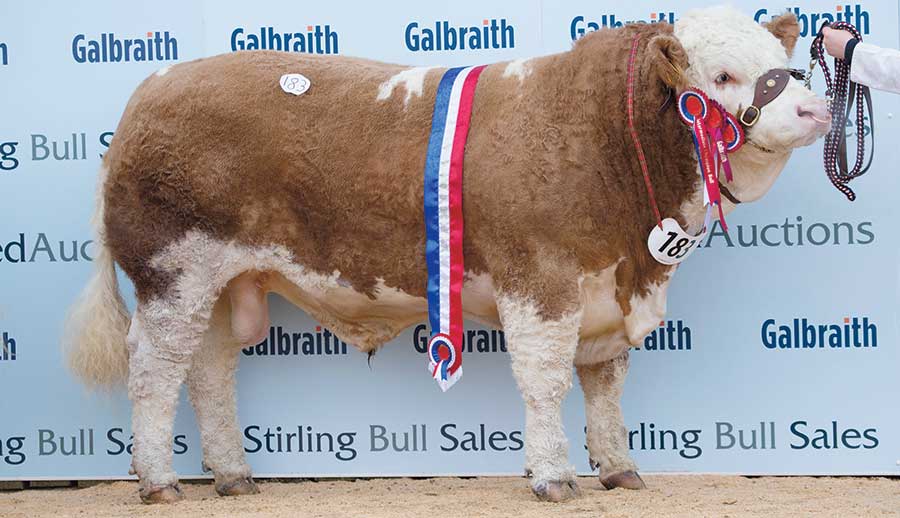 Three lots then hit the 10,000gns mark. Islavale Hugo was sold to WJ Barclay, Deskford, Cullen. He is from Islavale Echo and a cow called Emblem by Chestermann Varney.

Woodhall Friday sold with her calf at foot after running with Islavale Frontier since November. She is a March-2014 daughter of Curaheen Commanche out of a dam called Wishinwell, a Corrick Nebraska daughter.

Also at 10,000gns was Kilbride Farm Haka from WH Robson and Sons, Doagh, Ballyclare. He is by Kilbride Farm Warren out of a Crugmelyn Brenin daughter. He knocked down to WJ and J Green of the Corskie herd, Fochabers, Morayshire. 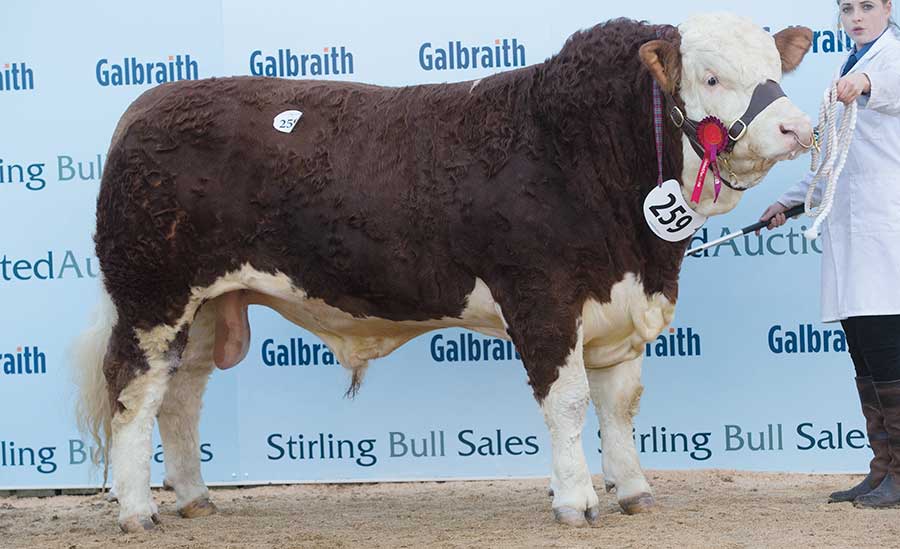 Kilbride Farm Haka was one of three bulls to hit 10,000gns © Tim Scrivener