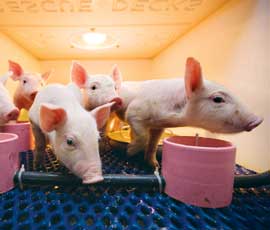 Porcine Epidemic Diarrhoea Virus (PEDv) could pose a real threat to the pig industry if it was to arrive in the UK.

Although there are no confirmed cases, farmers are being asked to increase biosecurity and remain vigilant to try to keep the disease out.

PEDv has already spread from China to America, where mortality rates of up to 100% have been reported in newly-born pigs. More than 279 units in the USA have so far been affected since it was first identified on 17 May this year.

Zoe Davies of the National Pig Association says the disease is even worse than PMWS due to the number of mortalities. “It’s all about trying to prevent this disease coming in. We don’t know how it arrived in America from China, but one thought is it came in on a vitamin and mineral supplement.

“One test has proved positive and another negative, so results are not conclusive that it was the source.”

As a result, Dr Davies is urging producers to work with their nutritionist, feed supplier and vet to check the provenance of nutritional products on their farm and consider whether any might pose an unacceptable risk.

Although one strain of PEDv has been present in the UK since the 1970s, it is not an issue as the national herd are now immune to it, says Dr Davies. “This is a new strain of the virus and could be really dangerous for the pig industry,” she warns.

Dr Davies says current UK pig herd health is in good shape, so she urges any farmers seeing diarrhoea and high levels of mortality in young pigs to contact their vet immediately. “It’s key to get it identified early and to test. We are waiting for a protocol to be agreed about how to handle the disease if it was to arrive.”

Symptoms of the disease include watery diarrhoea, vomiting/regurgitation and anorexia, explains Helen Clarke, BPEX interim veterinary programme manager. “The disease in America has been most severe in neonatal pigs as they are most susceptible to dehydration. There are no differentiating symptoms to transmissible gastroenteritis (TGE) virus, although what the cases in America have shown us is that mortality tends to be a lot higher.”

Control will be the same as it would for other viral enteric diseases such as swine dysentery, says Ms Clarke. “PEDv is not massively treatable, so getting fluids into these young pigs and using electrolytes where necessary would be crucial. However, because they are then immunocompromised – as the cases abroad have shown us – they can quite often succumb to secondary infections and die,” she says.

However, if the disease was confirmed on farm then good biosecurity protocols such as adequate quarantine, isolation of cases and disinfection would help prevent entry or spread of disease within the herd.

Good biosecurity now is going to be imperative to prevent the introduction of PEDv, says Ms Clarke.

“Although biosecurity should be part of every pig unit’s risk management programme, we are asking producers to review farm biosecurity as a matter of urgency. Members of the Pig Health Improvement Project can also use the biosecurity tool on the PHIP website to identify where biosecurity can be strengthened.”

• Limit traffic, people and equipment on to the farm

 • Thoroughly disinfect anything coming on to the farm

 • Check with suppliers if any imported products coming on to your farm have a chain of assurance in place to minimise risk that contamination with pig products and pig faeces could have occurred. Products such as porcine plasma could be very high risk

 • Any essential visitors visiting the farm should be provided with clean boots and overalls and change before entering the unit.

The Pig Health Improvement Project has set up a PEDv knowledge centre where farmers and vets can find more information about the virus.