DEFRA has today (Wednesday 10 October) extended the Bluetongue Control and Protection Zones following the confirmation of further cases in Essex.

The zone now includes a number of areas to the west of the existing zone, including West Sussex and parts of Hampshire and Wiltshire. Oxfordshire and Warwickshire also now fall under bluetongue restrictions.

Extended areas in Leicestershire, Lincolnshire and Nottinghamshire are in line with EU legislation which requires Control and Protection Zones to be extended due to the proxmity of cases to the boundary.

The NFU is urging the farming community to adhere to the newly created areas, warning that if producers move animals across a boundary, which may now not be a county border but a local authority boundary, it would be in breach of Bluetongue regulations.

Commenting on the announcement, deputy chief veterinary officer Fred Landeg said: “Finding further cases is not unexpected, particularly given the nature of the disease, and we expect to see more cases before the end of the active midge season this winter.”

“If we are to contain the disease within the Control and Protection Zone, we must have an accurate picture of how far the disease has spread.” 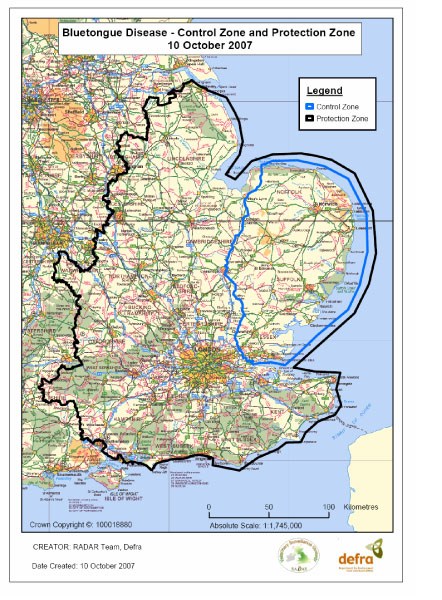 A map of the current Bluetongue Control and Protection Zones can be found at: www.defra.gov.uk/bluetongue.