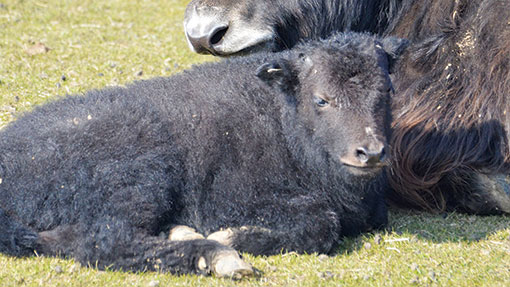 Could block calving dairy herds take advantage of the shorter gestation length of the yak to help drive fertility improvements and improve profitability?

When you first envisage a yak, you may be mentally transported to its natural home territory in the Himalayas, but a small area of Cheshire is pioneering their use in UK dairy herds.

Thanks to their short gestation length, Helen Worth, a vet with Wright and Morten Vets, believes targeted breeding to yak could have an important role to play in reducing culling rates and meeting fertility targets in block calving systems.

Such is her belief, in 2011 she and her husband imported two yak bulls and three heifers with the aim of assessing how they could help improve profitability on British farms. Hers is believed to be the only breeding herd of its kind in the UK.

With a gestation length of about eight months in a pure-bred yak, crossing a cow with the breed has been shown to knock about two to three weeks off pregnancy length.

As a result, Ms Worth believes breeding to a yak could play a primary role in helping producers shorten their calving block.

“If a farmer is artificially inseminating for six weeks, they could use yak semen for the last two weeks. In this way, they are still serving fertile females and are able to front load their calving block, maximising the number of cows that calve in the first three weeks.”

Alternatively, yak could be used to enable farmers to serve cows for longer, while still maintaining the same length of block.

“A farmer could continue to AI for a set time and then run sweeper bulls. Then as soon as the bulls come out, they could AI to yak for another week or two,” explains Ms Worth.

This means cows are provided with another opportunity to get in calf, while also giving individuals that calved later longer to get pregnant.

How yak is used will depend on an individual farm’s aims. On a system where breeding replacements is the main concern, such a strategy may not be appropriate. However if the aim is to calve as many cows as possible in the first three weeks of calving, yak could be valuable.

“As a vet, one of my focuses is trying to improve fertility on farm. This is one of the main reasons for cows leaving the herd in block calving systems. Breeding to yak could help farmers achieve a target empty rate of less than 10%,” explains Ms Worth.

Last year, semen was taken from one of Ms Worth’s yak bulls for distribution. Over the past two seasons, Cheshire dairy producer Rob Needham has used yak on cows at the tail end of his calving period.

By serving to yak for an extra two weeks, he has been able reduce cull rates and maintain his calving pattern, which runs from August until December.

“It means any cows that come bulling in mid-March have another chance of pregnancy, rather than being sent down the road or milked round,” explains Dr Needham, who runs 130 Holsteins at Cloud House Farm, Congleton.

The gestation length of the Holsteins bred to yak was an average 264 days – almost three weeks shorter than a pure-bred cow. Last year, 18 cows were served to yak, with five cross-bred calves born last November. Three have been born this year.

Ms Worth says conception rates reflect the fact cows at the end of the block are always going to be less fertile. However, apart from Fertility+ semen, conception rates to Yak were comparable to any other bull used at the same time.

With no established UK market for yak cross calves, Ms Worth has taken the offspring to rear as an experiment. She will be assessing meat quality and approaching restaurants and farmers markets.

Because meat from yak and yak crosses has been shown to be low in cholesterol and low fat, Ms Worth believes there is the potential to create a viable niche market in the UK – something which has already been seen in countries such as the USA.