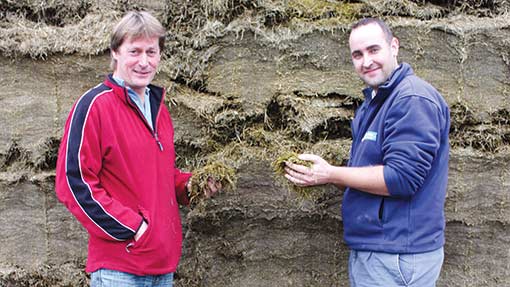 By selecting the right fertiliser and applying it at the correct time to suit his system, Devon dairy producer Mervyn Retter has reduced nitrogen use and seen a 15% increase in grass yields and quality, bringing an overall potential benefit of about £100/ha.

When Mr Retter (above left) began working with Mole Valley Forage Service’s Simon Clements, the 121ha of grassland at Home Farm, Cullompton, was pale and underperforming.

See also: Advice for farmers on dealing with flooded fields after the water subsides

The variations were a surprise to Mr Retter, as standard soil testing for nitrogen (N), phosphate (P) and potassium (K) had always analysed well.

“I thought our soils were good. Our pH is generally 6-6.5 and N, P and K levels are at or above target indices,” he says.

Mr Clements believes this is a good example of the importance of carrying out regular in-depth soil analysis. “By addressing soil imbalances there is a real potential to maximise fertiliser efficiencies and use less overall nitrogen,” he says.

“Many farms have been subjected to prolonged rain since the end of last year, so nutrients will have been leached out of the soil, making analysis even more essential so that the correct fertiliser can be selected to address any imbalances.”

Three years ago, low calcium levels were identified as one of the main areas for attention at Home Farm. “Calcium is the main building block of the plant and will aid in the uptake of nutrients,” explains Mr Clements.

“It is very common to see variability on farms, with both low or high levels causing lock-up of soil nutrients.”

Low magnesium levels also meant the plant’s ability to use the sun’s energy could have been compromised, while low sulphur may have limited nitrogen uptake. Insufficient sodium can also impact on grass palatability.

Mr Clements says failure to address soil nutrient losses after this year’s wet weather will create a high likelihood that grassland performance will be compromised.

And if soil conditions weren’t addressed after the wet year of 2012, nutrient balance could be under even greater stress off the back of another wet year (see right).

“As on many farms, the results at Home Farm showed there was a real opportunity to improve grass performance and fertiliser use efficiency by targeted use of specific compound fertilisers,” he says.

Mr Retter explains how getting the most out of grass silage is particularly crucial at Home Farm, because only one cut is taken every year, with the 200-cow Holstein Friesian herd then grazing the same swards.

“Because we have all our eggs in one basket, we need to ensure grass performs to its maximum and uses every kilo of nitrogen effectively,” he says.

A 26:0:0 fertiliser including sulphur, calcium, magnesium and other trace elements would be applied prior to silage cutting to address soil deficiencies.

A 20:0:0 fertiliser with 21% SO3 and sodium to help boost palatability and grazing intakes would then be applied after cutting.

The programme started with a split-field trial to compare the effects of the new treatment regime against the farm’s usual practices. Last year, three fields were split and monitored every two weeks with a grass plate meter.

One half followed the farm’s traditional regime, where up to 370kg/ha of urea was applied prior to first cut; 250kg/ha was then spread after cutting, along with 3,000 litres/acre of slurry.

The targeted fertiliser approach increased dry matter by 308kg/ha and increased ME by 3,388MJ/ha across the season. This increase in ME alone could increase production by 431 litres at 70% efficiency.

“The enhanced programme cost £22/ha more than the standard programme, but the total benefit was £107/ha, due to potential increase in milk yields,” explains Mr Clements.

“The results show careful selection of fertilisers to fit specific farm requirements can bring big benefits. I would urge farmers to carry out in-depth soil analysis in the autumn or spring so they can order and apply the right product.” The aim should be to test every field at the same time of year, every four years.

Following the trial, Mr Retter has been convinced of the benefits and has since started using the programme across all of his grassland.

“The proof’s in the pudding. Cows do seem to graze better. I suspect that’s down to the better weather we’ve had this year, combined with the fertiliser,” he says.

“The new fertiliser does cost more, but I hope the benefits will outweigh the costs through improved grass yields, and better cow fertility.”

In the long-term Mr Retter is also aiming to get more milk from forage and improve grazing management – something that will only be helped by improved sward quality.