For years, Northern Irish Simmentals have played second fiddle to the limousin, but now the tables are turning. Joining the Cornish Simmental Club, Chrissie Lawrence visited four breeders who are really making their mark.

A Simmental that looks like a Limousin – it may sound like an off-the-wall comment for a hardened Simmental enthusiast. But County Tyrone breeder John Moore believes that to meet modern-day requirements, the breed has to decrease in size and sell the quality suckler cow genetics it has to offer rather than produce size for the show ring.

“When selling suckler replacements, size doesn’t really come into it,” says Mr Moore, who runs the Omorga pedigree herd at Coagh, Cookstown, alongside his father Harry. “To compete with the dominance of the other Continental breeds, we’ve had to breed smaller cows, produce tight udders and retain the foraging, mothering and calving ability the Simmental is renowned for.”

Running the farm alongside full-time employment means the herd has to operate in exactly that way. “We’re looking for cows with the perfect maternal characteristics to breed quality replacements from and bulls that can produce sons for Northern Irish sales and across the water in Perth,” he says.

And Mr Moore is no stranger to the Perth rings – he shares the record for the highest-priced Simmental bull, Omorga Samson, to be sold through Perth. “But those sorts of sale don’t come along enough to rely on,” he says. “You have to look after the commercial man back home and provide them with what they want.”

He may have only 25 pedigree cows, but you’d have to go far to find a breeder more committed to family lines than David Hazelton.

His Ranfurly herd at Dungannon was established in 1972 following an upgrading programme and the purchase of the first pedigree females in 1978. Since then, Mr Hazelton has established himself as one of the leading lights, having undergone extensive embryo transfer programmes to maximise the herd’s genetic potential.

German genetics have been used in the form of the Fleckvieh in the past couple of years with the aim of enhancing the breed’s milk attributes without jeopardising beef qualities.

And because of the increased demand for darker-bred Simmentals – something breeders in the UK are also beginning to demand – Mr Hazelton has produced both light- and dark-coloured animals to suit all outlets.

Later this month he will take an incredibly dark bull across the water for sale in Perth. “He’s a little different in that he is sired by Knox Haped, a South African bull bred on an easy-calving dam line,” he says. “He’s already been shown successfully and will, hopefully, have his followers in Perth.”

The strong demand for Simmental suckler females is the main driving force behind the expansion of Joe Wilson’s Ballinlare Farm at Newry, County Down, run with his wife Phyliss and sons Alan, Keith and Neil.

“I could sell twice as many females as I do in this area alone,” he says. “We still have females bred from the original female lines bought back in 1984.”

One line has been particularly dominant – Ballinlare Farm Moneypenny has been a successful show cow for the family and has won championships as a heifer, junior cow and senior cow.

With those females, Mr Wilson has run some of the best-known bull names in the breed, including Camus Brandy bought in 1991, who sired the 10,000gns Ballinlare Farm Rival sold in Perth in 2005 and Ballinlare Knight Rider, sold for 7000gns.

Along with giants such as Brandy, the Wilsons have been running Milnafua Jordan and a homebred bull bred from him, along with their recent addition Raceview Valentino Miracle, bought at Roscommon for E8500. 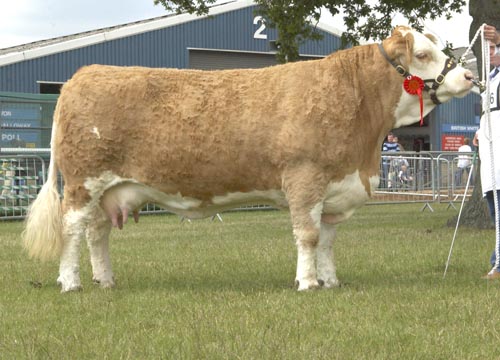 Billy Robson and his sons Michael and Norman have been at the top of their game for the past 40 years after importing Simmental cows from Germany in 1971 to create Killbride Farm Simmentals.

This was followed by the addition of a few choice females, most noticeably Carn Eunice, of which the Eunice family now forms the largest in the herd.

Stock bulls have been bought at home and abroad, with French bulls Etandard and Orage having had a huge impact in the early days and, more recently, Moncur Sensation and Milnafua Graduate. Some of the best young bulls, such as Barrister and Newry, have been retained and had semen taken.

Numbering 60 cows, the herd is run on a commercial basis, with cows having to winter six or seven months on slats in cubicles, so legs, feet and structural soundness are important in selecting breeding stock.

“We have a solid following from both pedigree and commercial breeders and are seeing the need for a smaller, compact cow with longevity,” says Norman.

“The Simmental has been on a high for a few years now in Northern Ireland, so let’s hope it continues across the water,” he adds.