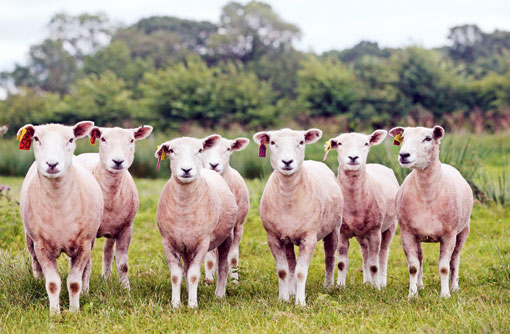 Should we be looking to breed smaller ewes in the UK to improve efficiency? Jeremy Hunt takes a look at what New Zealand sheep farmers are doing.

Bigger may not be better when it comes to the ability of ewes to produce the highest margins – something New Zealand sheep producers are well aware of.

It’s easy to assume a ewe with a bigger body size will be reflected in the higher value of their prime lamb progeny. So it’s no wonder few in the UK would consider reducing the size of their ewes.

However, in New Zealand, where ewe efficiency is the driver to profitability, ewe size holds the key to those that are the most efficient money earners.

The New Zealand sheep industry has a reputation for tackling ewe efficiency on all fronts. Strict culling policies ensure flocks carry no passengers, but the country’s approach to squeezing every penny of profit from their ewes has also encompassed their maintenance costs.

“The selection methods used in New Zealand over the last 25 years to reduce labour input have also created very efficient sheep, but the country’s flock comprises 50% pure Romney ewes with a further 25% containing Romney genetics, so the New Zealand sheep industry is in a different position to us in the UK,” says EBLEX animal breeding scientist Liz Genever.

“In New Zealand it’s been easier to more effectively shift a high proportion of the national flock towards improving a trait, whereas in the UK any such improvements can only be achieved piecemeal.”

Mature ewes in New Zealand tend to be 5-10kg lighter than commercial ewes in the UK and while that means they cost less to maintain, they aren’t producing a significantly lower output in terms of liveweight of lambs weaned.

The main focus of production targets for New Zealand sheep producers is to produce lambs with a weaning weight that is 75% of the weight of the ewe.

Big ewes in New Zealand aren’t considered to be as efficient as smaller ewes in terms of the weaning weight of the lambs they produce.

The country’s average carcass weight is about 18.5-19kg – only marginally lower than the UK average of 19.5-20kg, but costing a lot less to achieve.

So is there potential for UK sheep breeders to consider reducing mature ewe weights in an effort to improve efficiency and reduce feed input costs?

While there is clearly an opportunity to do so, Dr Genever admits it would be a “phenomenally difficult trait to select for”.

In New Zealand the mature weight of Romney ewes is 60-65kg, compared with the UK’s North of England Mules at 70-75kg, and while Kiwi sheep producers are driven by a need to reduce the amount of “ewe liveweight” they have to feed over the winter, perhaps the high costs incurred by most UK flocks last winter will trigger more awareness of ewe size here.

So UK sheep producers can expect to hear more about “ewe efficiency” in the coming months – and there will be messages that shouldn’t be ignored.

Size certainly does matter when it comes to flock profitability, but it may be the lower winter feed costs of slightly smaller ewes that hold the key to a higher level of efficiency and a bigger margin.

Shropshire sheep breeder Robyn Hulme has become a “disciple” of the New Zealand approach to sheep farming and his Easy Rams – both Suffolks and Texels of pure New Zealand genetics – are winning a growing number of customers each year.

“Ewe efficiency is the watchword of profitable New Zealand sheep farming. It’s all about how much can she produce in terms of lamb weaning weight in proportion to her own body liveweight,” says Mr Hulme.

“There’s tremendous potential here in the UK to start looking at ewes and evaluating what they are actually costing in relation to the weaning weights of the lambs they are producing.

We’ve got the potential in the UK to reduce ewe feed costs by up to 25% by keeping more efficient ewes and not lose out on lamb weaning weights. It’s so obvious I can’t understand why no one has cottoned on to this before now.”

He believes there has never been more urgency to debate the ill-informed assumption that bigger ewes are the most profitable.

“The efficiency of the ewe is the critical factor affecting a flock’s profitability. The aim should be to produce lambs that grow as efficiently and as quickly as possible and that can still be done if we make ewe efficiency a priority for our national flock.”