A new breed record for a British Blue bull was smashed at the Border British Blue Club’s 27th annual spring show and sale at Carlisle on Saturday (20 May), when Dragon Blues Kai ET from GW and K Williams sold for 24,000gns.

Kai is a 24-month-old black-and-white bull and was one of several top-priced lots put forward by GW and K Williams, Llanwnnen, Lampeter. 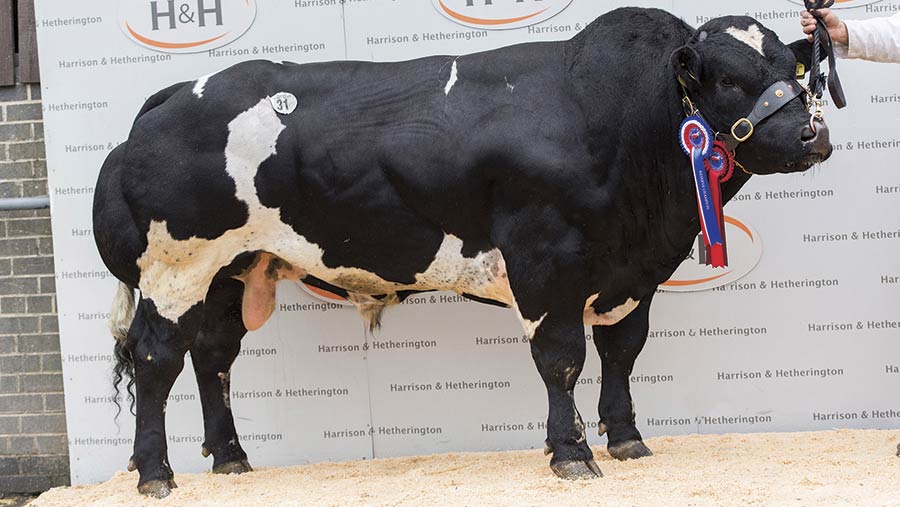 Next in the money at 15,000gns was the supreme champion, Bedgebury Kent, from Andrew Price. 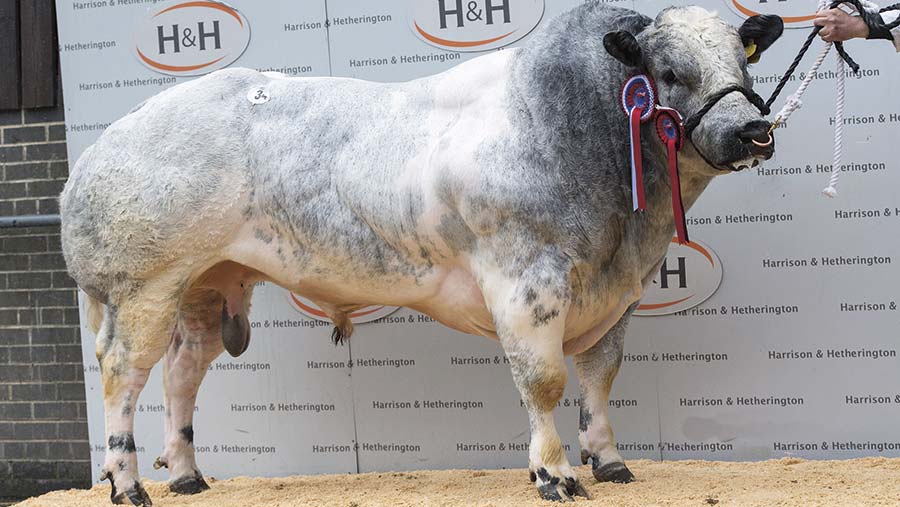 This powerful two-year-old blue roan bull is by Germinal de Fooz and out of the home-bred cow Fancy Pants by Ballygrange Alex. He was purchased by Andrew Haste for his Stoneleigh herd, based in Devon.

Also hitting the high spots at 12,000gns, was Dragon Blues Kevin ET, a 26-month-old bull from the same flush as the top-price bull Dragon Blues Kai. 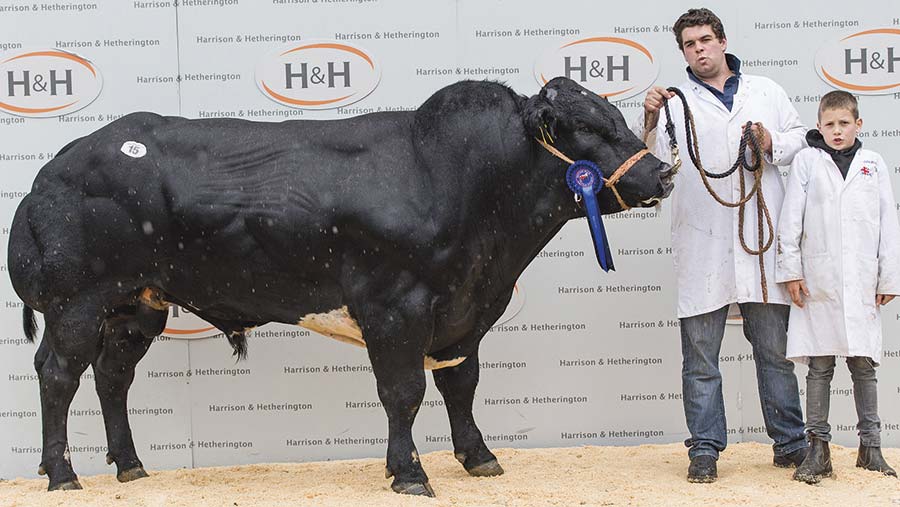 Kevin, whose 200-day weight figures are in the top 1% of the breed, stood second in his class and was knocked down to H Harvey and Son, Waxham Hall, Norwich, Norfolk.

Next in the price ratings, also from GW and K Williams, was Dagon Blues King ET, an eye-catching 27-month-old black bull from the Cromwell Fendt and Dragon Blues Hope flush. 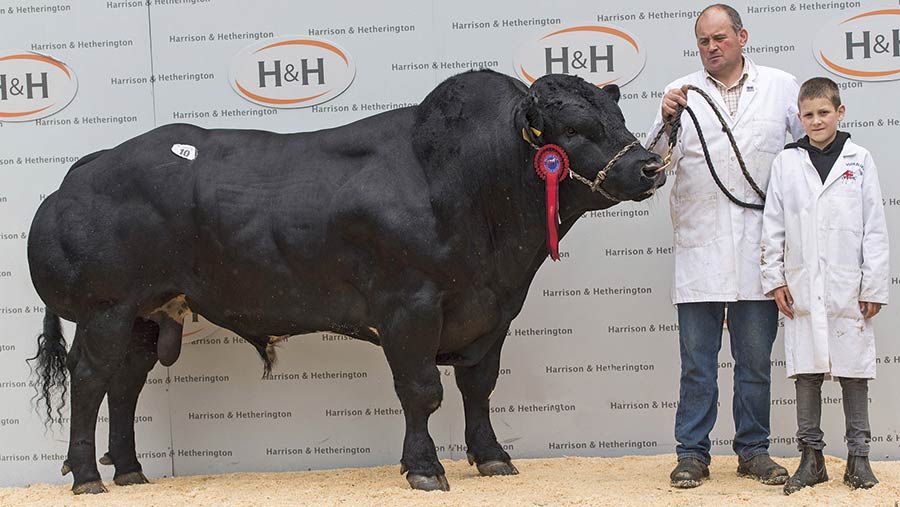 This 19-month-old bull is from the Solway View Firecracker and Bringlee Evadine flush. The successful bid came from Kedzlie Farms, Blainslie, Lauderdale, Galashiels.

From the same stable and at the same money was Solway View King Kong. This two-year-old son of Solway View Dynamite and out of Bridgemuir Dolly ET was knocked down to W Ridley, Wood Hall, Hesket Newmarket, Wigton.

Also at 10,000gns was Almeley Kwasimodo, shown by Graham Morgan. This 23-month-old son of Colos Van Daisel and out of Almeley Forever Chelsea by Drybarrows Cawdale stood second in his class and joins the Gass herd of Andrew Kay, Gass Farm, Maybole, Ayrshire.

Topping the females at 7,000gns was Mel and Diane Lucas’ cow, Lukeroyal Fidget ET. She is from the Baron du bois Bauloye and Lukeroyal Clarabelle flush. She was sold to an undisclosed buyer.

Next at 6,800gns was the first-prize-winning heifer and calf from local enthusiast Greg Jackson, Skelton, Penrith. Woodend Jamelia is a January 2014-born heifer by Atok Chancellor and out of Springfield Gloria.

She sold with her five-month-old bull calf at foot, Woodend Logan, by Attribut Du Fond De Bois, to B Dufton, Huntly, Aberdeenshire.

Also hitting the high notes, again from Greg Jackson, was his first-prize-winning maiden heifer Woodend Kendra . She is a March 2015-born heifer by Atok Chancellor and out of Springfield Georgia. She sold to Preston Farms, Omagh, County Tyrone for 5,000gns.

Also at 5,000gns was Top Side Lexi ET from Ross and Elaine Pattinson, Brampton, Cumbria. Lexi stood second in her class and is from the Bringlee Carlos and Ridge Dean Auntie flush.

The female championship was awarded to Richard Tiplady Barnard Castle with Tipladys Lottie. By Tweeddale Ironman and out of Franks Exasperation ET, this smart, nearly all black heifer was knocked down to the day’s judge, Andrew Anderson, Smallburn Farm, Elgin, Moray for 4,500gns.