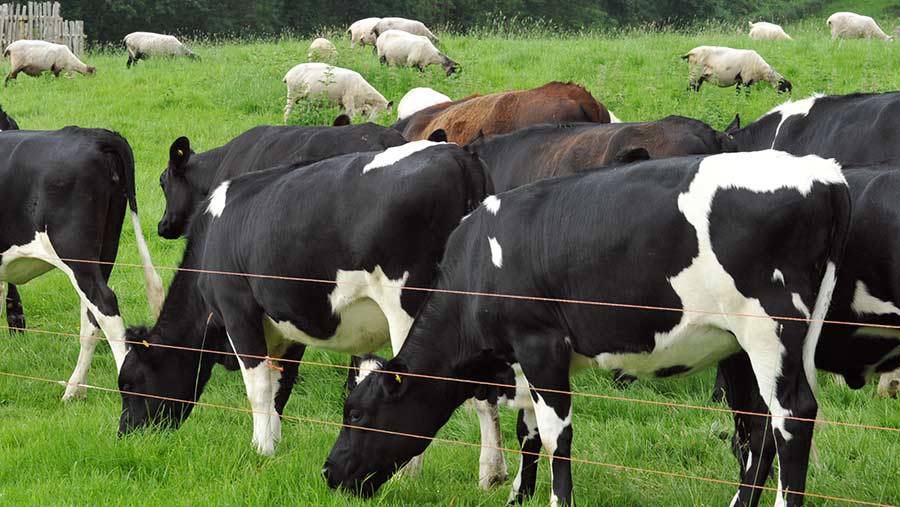 A mixed-farming enterprise which had to give up its indoor lambing facilities is to adopt the same low-cost principles in its sheep flock as it applies to its dairy herd and switch to an outdoor system.

The NT is planning to recreate the Capability Brown walled garden where the sheep housing is, from next year, lambing will be outdoors.

See also: Pros and cons of indoor and outdoor lambing

Suffolk-cross ewe lambs have already been sold with ewes set to follow in August. This will allow the business to restock with breeds it believes are more suited to lambing outdoors.

William Cawley, who farms with his father, John, says although the situation is not one he had planned it has been a catalyst to improving the flock’s financial resilience ahead of subsidy changes post Brexit.

“We need to go down the low-cost route and run the sheep on a similar system to the dairy herd, by getting more from grass,’’ says Mr Cawley, a member of the AHDB-supported Marches Discussion Group. 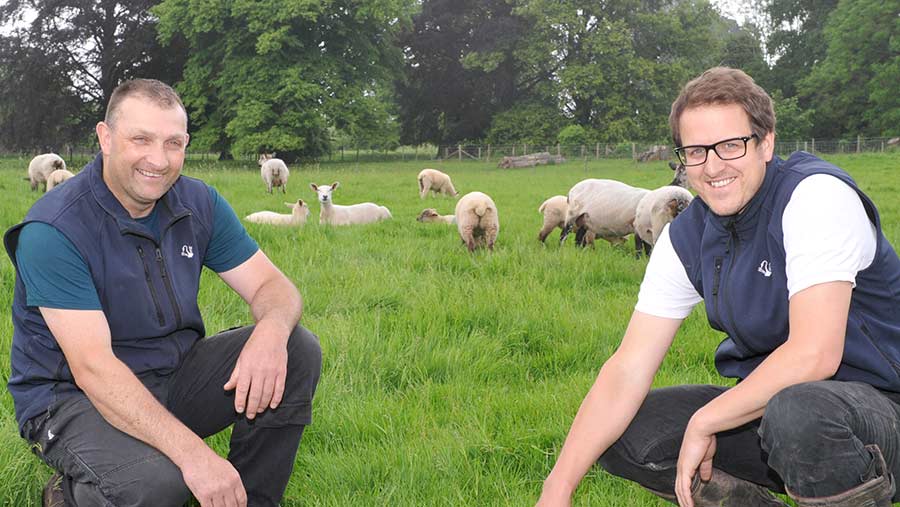 The autumn-calving herd of 500 New Zealand-cross Friesians and Jersey crosses, managed by Matthew Ingram, calves outdoors in a 10-week block from 18 August.

“One of the reasons we got through the milk price crisis was our low-cost approach to milk production. We want to mimic that with the sheep,” says Mr Cawley.

Genetics are important to making that system work – he is looking to establish a new flock with breeds such as the Lleyn, the Romney or the Easy Care. 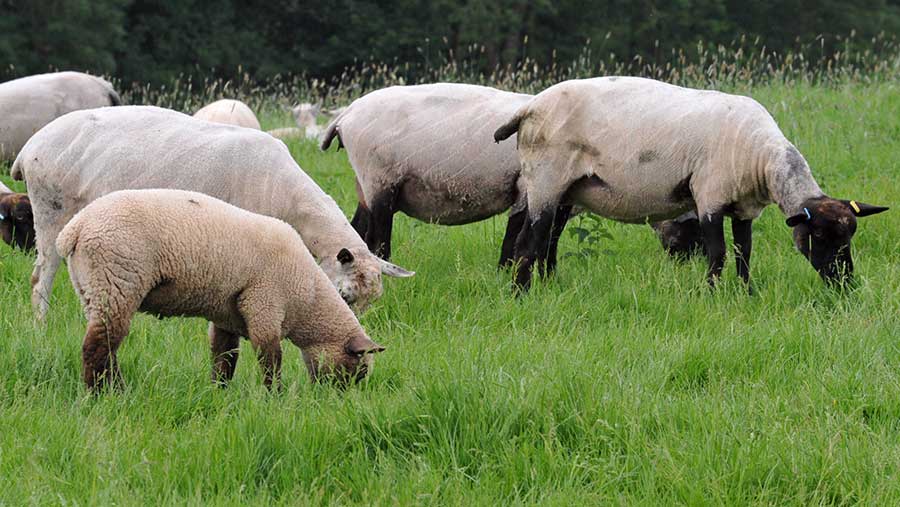 Lambing will be later. The flock lambs in 10-14 days from 12 March but this will shift to the beginning of April, to allow ewes to be on a good plane of nutrition on good-quality grass for 35 days before lambing.

The flock is run by shepherd Mark Hollis with ewes grazing 24ha of stubble turnips from November to February and housed for a month on a total mixed ration before lambing.

Ewes and lambs are turned out within 24 hours. Ewes are run in groups of 30 spread the farm, sharing grazing with 250 RI and R2 dairy heifers.

The principle aim is to get the lamb’s frame grown quickly, before grass quality dips at the end of May.

The bigger lambs, those weighing about 35kg, are drawn off first and fed creep to sell at 42-44kg at Ludlow Market.

The remaining lambs are fattened on the aftermath of the fourth cut of red clover and ryegrass silage in September.

The business owns 809ha but about half of this is either subject to lifetime tenancy agreements with other farmers or is woodland.

The Cawleys rent 97ha of permanent grass parkland at Berrington from the NT and there is also some Higher Level Stewardship arable reversion at Berrington.

The farming system at Berrington is largely dictated by the NT and stewardship schemes – about 90,000 people visit the estate every year and this limits use of electric fencing for sub-dividing fields.

No ploughing is permitted so the pastures are largely long-term, permanent leys and this affects the farm’s ability to grow grass – it produces 4t DM/ha.

Maize and silage is grown on 66ha in a rotation on the 210ha arable block.

“There will be a chunk of cash disappearing and we must look at filling that hole somehow,” says Mr Cawley.

Sheep farmers must not underestimate the value of pasture to add profit to their systems, a leading grazing specialist advises.

During a series of AHDB meetings, Trevor Cook, a New Zealand-based farmer, vet and consultant in pasture management, shared his top tips on how to use pasture more profitably. 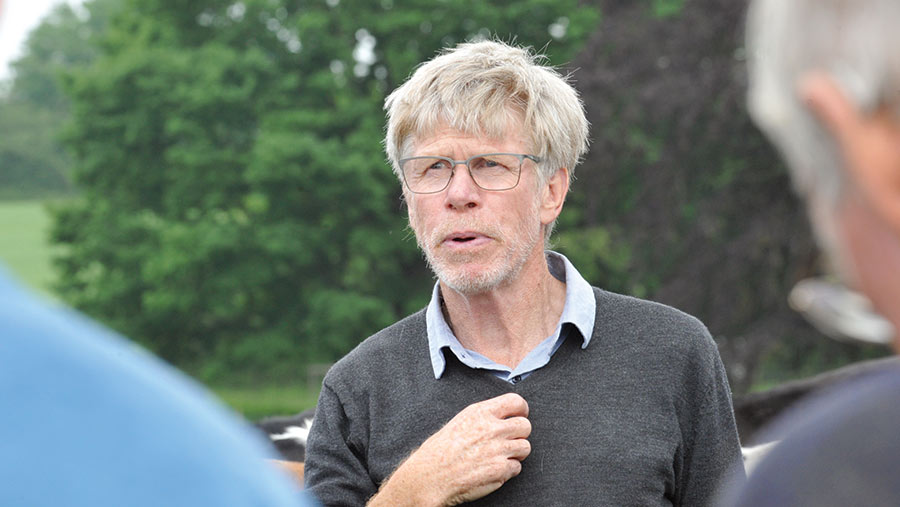 Making profit from pasture not only means growing more grass but use 80% of what is grown.

“A lot of feed is wasted and not transferred into production because the grazing system is not set up for maximum utilisation.”

Work out pasture requirement and availability and how to allocate it.

Farmers instinctively assess how well they are feeding their animals by the amount of pasture they are turned into but residual dry matter – what is left behind after grazing – is key.”

For instance, if we are fully feeding ewes in early summer we need to leave behind 1,300kg DM/ha to fully utilise and maintain the quality in regrowth.”

“Some people mistakenly believe it is about measuring their highest clover plant in a field but that’s not the case,” says Mr Cook.

“To get an overall picture, simply drop a clipboard or equivalent in the field and use a sward stick to measure at the point where it drops.”

Feeding a 70kg ewe 2% of liveweight – 1.4kg DM/day – is sufficient for maintenance but any lower and she will be underfed and will lose condition.

The highest demand in the whole year for a ewe is peak lactation, when she will consume 5% of bodyweight for between two and three weeks.

“You must know bodyweight to work out the percentage to feed at different times of the year,” says Mr Cook.

Use a feed budget

Budget well and you are less likely to run out of feed. “Why bother to measure grass if you are not going to use a feed budget?’’ asks Mr Cook.

“It is not difficult and as you collect data you learn more about your pasture and anticipate what might lie ahead.

“You will know when a gap in feed will occur and can apply nitrogen in plenty of time to minimise the chances of running out of feed.”

Overgrazing will reduce pasture quality, even in the winter

To graze out pastures perfectly, animals should be moved every 48 hours when grass growth is at its most active but don’t underestimate winter growth.

“There is a lot more activity going on than you think in the winter,” Mr Cook suggests.

“If you graze for more than four days those pastures will be slower to grow back, it is not necessarily the level it is grazed down to but the time taken to graze it.

“Maximum shift should be four days, grazing fields for one, two, three weeks really stumps the ability of pasture to regrow.”