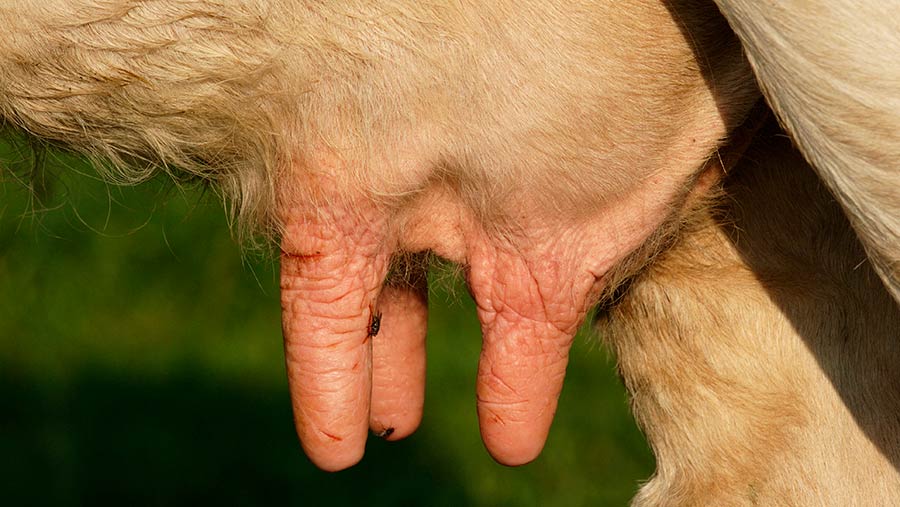 Post-milking teat disinfection has long been an integral component of mastitis control and teat conditioning programmes, so it is no surprise more dairy farmers are automating this process.

In some regions, farmers can receive up to 40% of the cost of installing these systems through Rural Development Plan (RDP) productivity and animal welfare grants, but are they an investment worth making?

Ben Watts, of Kite Consulting, who is an AHDB Dairy mastitis control plan accredited practitioner, warns that for automatic systems to be effective, they must be set up carefully to give good coverage of all four teats.

See also: How performance records can cut mastitis and lameness

Mr Watts recommends a ‘tissue test’. “Get cows in a race and wrap a tissue around the teats. There should be dip all over the tissue.

“In general, automating this process has a number of advantages but, at the very least, they must provide the coverage you would get with a manual system to make them worth the investment.’’

Although RDP funding is available in some areas, Mr Watts cautions farmers to weigh up the benefits to their own businesses before making the outlay.

“Money is tight at the moment so any financial outlay must generate a 10% return on investment over and above depreciation. If automatic teat spraying is going to fit that criteria, then it’s an investment worth making.’’

“It is essential the system is checked regularly, as the first sign that it’s not working could be a sudden rise in mastitis cases or high cell counts.’’

A study overseen by The Dairy Group, which compared automatic and manual approaches to teat spraying, concluded manual application using a hand-held vacuum-operated sprayer gave, on average, just 50% coverage of the teat barrel, mostly due to poor application technique.

“If a farmer expects an automatic system will give 100% teat coverage 100% of the time then he will be disappointed. However, if manual application is only achieving an average of 50% teat coverage, anything that can consistently achieve over and above that has to be worth considering.”

The installation costs of automatic systems vary depending on the dairy layout, existing plant and teat spraying requirements.

Our downloadable guide (PDF) runs through some of the key products on the market.

Until 2009 he had been manually spraying teats post-milking, but was struggling with high rates of mastitis; cell counts were in excess of 300,000 cells/ml.

Mr James was also keen to reduce time spent in the parlour.

He admits the system can be costly to maintain – it costs him £900 to replace the liners in all 30 units – but says this is dwarfed by the financial payback of improved herd health and milk quality.

“We always struggled with high cell counts in June, July and August, but we are now hitting the top bands for milk quality,’’ says Mr James, who farms with his parents, Stephen and Joyce.

“We probably get mastitis in about 15% of the herd now compared with 25% previously.’’

Time spent in the parlour has reduced by an hour a day and there has been a notable improvement in teat condition.

“The only downside is the cost of the parts,’’ says Mr James.

“The liners cost twice as much to replace as they did when we didn’t have the automatic system.’’