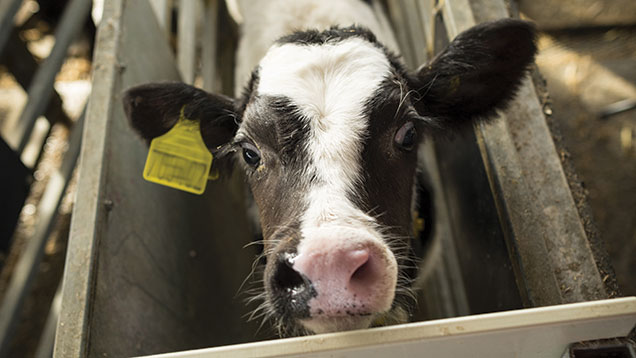 Every dairy farmer knows the recommendation is to get heifers to calve at 24 months if they are to get the best from an animal.

Research work carried out over a seven-year period at the Royal Veterinary College showed heifers calving at 23-25 months of age live longer, give more milk and have less problems in later life, compared with those that calf later.

But to enable farmers to hit this target a heifer needs to be at first breeding stage by 13-14 months and in-calf by 15 months of age. This is only possible with careful early growth management.

Producers are advised to aim for a growth rate of 0.85kg/day during the first three months of life and 0.7kg/day after that until first breeding.

Mark Thornton, farm manager at The Parkes, in Audlem, Cheshire, has been part of a project led by Volac, which has involved an expert visiting the farm to recommend changes to rearing practices to improve calf growth rates and consistency.

The main change for Mr Thornton, who milks 300 Holstein Friesian cows achieving an average yield of 9,500 litres, has been to move away from bucket and trough feeding to a computerised automatic feeder.

‘We were feeding calves 2-3 litres of colostrum for the first three days and then moving them on to milk powder, housing them in individual pens for the first two or three weeks,” he says.

“After that we would put them into batches of 10 and start trough feeding. It worked, but it also had its issues. In a batch of 10 there may have been an age difference of up to a month and sometimes the smaller calves would get pushed out by the larger ones.”

The introduction of the automated feeder means that each calf now gets a regulated amount of milk each day, which is delivered at the right temperature.

The feeder tracks how much milk each calf has already drunk and how much more it can have in any 24-hour period.

“It has given better consistency. Each calf now goes into the feeding stall and is not pushed about,” says Mr Thornton. “It gets the opportunity to take in what it needs, when it wants. It is feeding though the day but in smaller amounts – it is a more natural way of feeding a calf.”

The feeder delivers 2 litres/day of milk initially, which increases up to a maximum of 6 litres, at a mix rate of 160g of powder for every litre of water.

Mr Thornton says the feeder has reduced the labour requirement of feeding, although he adds it still needs monitoring. To train the calves to suck from the machine straight away, the farm has also switched to using a bottle and teat for the first colostrum feeds.

The main benefit is they are seeing a more steady progression in the growth rates of calves – from a very mixed picture to a consistent 0.75-0.8 kg/day. There has also been a reduction in scouring because of the more individual attention the calves are getting.

The herd is averaging first calving at about 29 months, but Mr Thornton says he hopes the changes made will enable him to hit the 24-month target.

“We’ve only had the feeder for 12 months, but the early signs are good. The better the start the calf has, the better chance it has of achieving its potential.”

A move away from feeding waste whole milk to a milk powder replacement has seen daily growth rates increase significantly. This is helping to put the farm on target to reduce age of first calving from 26 to 24 months. The farm is also getting better prices for its bull calves.

See also: How to prevent lameness in dairy heifers

Calves from the 210-strong milking herd of Holsteins are fed at least 2.5 litres of colostrum within two to three hours of birth and then they are moved on to a milk replacer, which is currently mixed at 160g/litre. The calves get 2.5 litres of this twice a day, which equates to 800g/day.

“When we switched to milk powder we still were only achieving a daily gain of 0.54kg/day, but that was using a mix rate of 100g. We then switched it to 125g/litre, feeding 2.5 litres twice a day and the growth rate moved to 0.83kg/day.”

Mrs Walkden says at the recommendation of her adviser she has switched the mix rate up to 160g/litre for the winter to take into account the calves’ extra energy requirements in the colder months. “They are doing very well and we will consider leaving them on that.”

The move away from using waste milk was driven partly because they had less available. But there were also health reasons, such as reducing the risk of Johne’s in replacement heifers.

Mrs Walden says she has seen a reduction in scouring since implementing the changes.

This may partly be down to the fact they have reduced the target time for getting colostrum into a calf – from six to eight hours, down to three or four hours, she says. But it may also be because they are being very consistent in the way they mix the milk powder.

“We take the temperature of the milk with a digital thermometer, so we know it is 40C and we also measure it to the litre. We weigh the powder on a digital scale each day.”

Waste milk is still being fed cold to the bull calves, but the fact they are not heating it is saving costs, she adds.

The first heifers reared under the revised protocols are only 10 months old, so it is too soon to know if they will calve at 24 months. But Mrs Walkden is confident she is moving in the right direction.