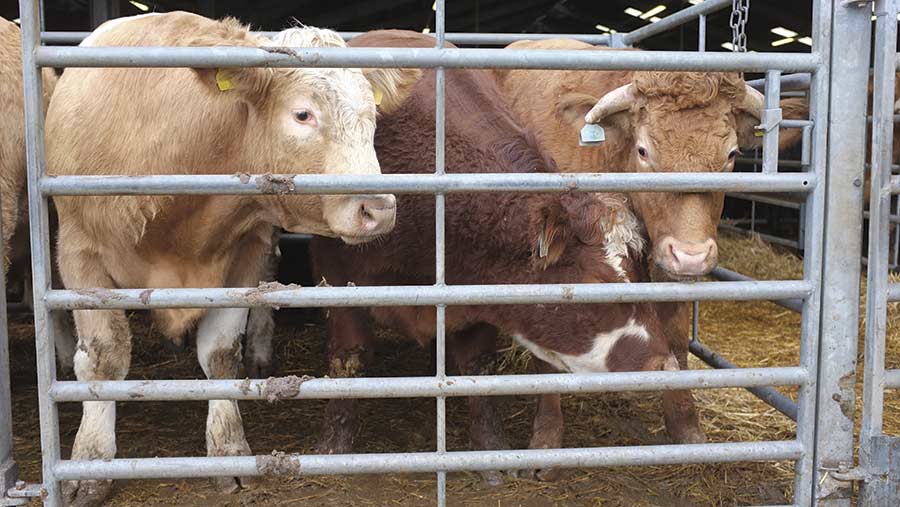 The snow cleared last week, allowing normality to resume at many cattle rings and saw feeders benefit from a £42 a head lift in prices on the week for prime bulls.

The increase (+6p/kg) was despite marts reporting a sharp increase (+30%) in prime cattle numbers at 3,628 and follows a period of price recovery over the past month, according to AHDB market reports.

Deadweight steer prices have also stopped nosediving after losing 9p/kg since the start of the year to bottom out at 353p/kg.

This 9p drop cut carcass values by £29-£33, but there was a 2p/kg recovery last week as snow cut supplies, leaving weekly numbers back on the year for the first time.

The much more resilient live ring trade, meanwhile, has recovered to the highest point since the opening week of the year. Scottish marts saw all classes of cattle average £2/kg on Monday (12 March).

Cull cow prices remain phenomenally strong and are often the highlight of mart reports, with GB cow prices averaging more than 120p/kg for five weeks and reaching highs of 125.28p/kg.

Overall prime cattle prices were back 8p/kg last week (Thursday 8 March) at Thainstone, averaging 197.3p/kg, after a 105% increase in throughput as consigners managed to get stock in after the snow held them back the week before.

Young bull and heifer prices remained firm at 156p/kg and 221p/kg, respectively, both up on the week. However, it was steer prices that were down 21.6p/kg on the week at 197.4p/kg.

“We saw variance, with the butcher’s lighter weights, handier weights and heifers very sought after and the heavier fat cattle not so,” said auctioneer Tim McDonald.

“We’re seeing that all through the year now. We have more demand for the lighter weights – anything up to 550kg really.”

While Thainstone has been seeing particularly strong trade for cows – reaching 148p/kg – Mr McDonald thinks prime prices may have plateaued for a month or six weeks before they become scarce again.

Auctioneer Simon Draper is telling vendors in his area they should take advantage of the buoyant store cattle trade now rather than waiting for April, when finishing sheds could be full.

“Anything 12 months old and continental-bred wants selling,” he told Farmers Weekly. “When I have a look on farms and see heifers worth £900 and steers worth £1,000 or more the advice is to get them sold.”

He expects younger store cattle to be dearer for the rest of March before a lot of numbers come forward in April.

Last week (9 March) trade was up £30 on a fortnight ago and a good-quality yarding of cattle saw steers level at £967 a head and heifers average just shy of £800, as well as a mart record of £1,570 for a Charolais feeding cow.

Mr Draper says the deadweight prices for the 300 cattle the mart markets weekly are strong, leaving farmers with profits to buy store cattle.